Can your TBR pile get any taller? We think YES. From stirring second novels to a tome of political commentary, observations on music to unsettling fictions, our mid-August new release list hits all the right notes. Read more about ’em below!

A stunning, lyrical novel set in the rolling foothills of the Appalachians about a young girl and the family truths that will haunt her for the rest of her life

“A girl comes of age against the knife.”

So begins the story of Betty Carpenter. Born in a bathtub in 1954 to a white mother and a Cherokee father, Betty is the sixth of eight siblings. The world they inhabit in the rural town of Breathed, Ohio, is one of poverty and violence—both from outside the family and, devastatingly, from within. The lush landscape, rich with birdsong, wild fruit, and blazing stars, becomes a kind of refuge for Betty, but when her family’s darkest secrets are brought to light, she has no choice but to reckon with the brutal history hiding in the hills, as well as the heart-wrenching cruelties and incredible characters she encounters.

Despite the hardships she faces, Betty is resilient. Her curiosity about the natural world, her fierce love for her sisters, and her father’s brilliant stories are kindling for the fire of her own imagination, and in the face of all to which she bears witness, Betty discovers an escape: she begins to write. She recounts the horrors of her family’s past and present with pen and paper and buries them deep in the dirt—moments that have stung her so deeply she could not tell them, until now.

Inspired by generations of her family, Tiffany McDaniel sets out to free the past by delivering this heartbreaking yet magical story—a remarkable novel that establishes her as one of the most important voices in American fiction.

Get more Betty at our virtual event with Tiffany McDaniel on August 25th at 7PM CDT. She’ll be joined in conversation with Austinite and The Secrets We Kept author, Lara Prescott, live on Zoom. Get more information and register to attend here—it’s completely free! 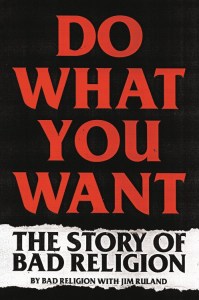 Do What You Want by members of Bad Religion

From their beginnings as teenagers experimenting in a San Fernando Valley garage dubbed “The Hell Hole” to headlining major music festivals around the world, Do What You Wanttells the whole story of Bad Religion’s 40-year career in irreverent style.

Do What You Want: The Bad Religion Story reveals the ups and downs of the band’s forty-year career. From their beginnings as teenagers jamming in a San Fernando Valley garage dubbed “The Hell Hole” to headlining major music festivals around the world, Do What You Want tells the whole story in irreverent style.

While Do What You Want tracks down nearly all of Bad Religion’s members past and present, the chief storytellers are the four voices that define Bad Religion: Greg Graffin, a Wisconsin kid who sang in the choir and became an L.A. punk rock icon while he was still a teenager; Brett Gurewitz, a high school dropout who founded the independent punk label Epitaph Records and went on to become a record mogul; Jay Bentley, a surfer and skater who gained recognition as much for his bass skills as for his onstage antics; and Brian Baker, a founding member of Minor Threat who joined the band in 1994 and brings a fresh perspective as an intimate outsider.

With a unique blend of melodic hardcore and thought-provoking lyrics, Bad Religion paved the way for the punk rock explosion of the 1990s, opening the door for bands like NOFX, The Offspring, Rancid, Green Day, and Blink-182 to reach wider audiences. They showed the world what punk could be, and they continue to spread their message one song, one show, one tour at a time — with no signs of stopping. 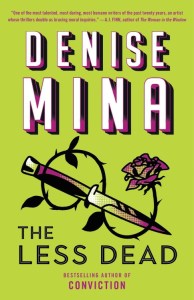 The Less Dead by Denise Mina

From Meike of MysteryPeople: “Dr. Margo Dunlop is at a crossroads. Her adoptive mom just passed away, and Margo misses her so much she can’t begin to empty the house-or, it seems, get her brother on the phone. Not to mention she’s newly single, secretly pregnant, and worried about her best friend’s dangerous relationship.

In an effort to cheer herself up she goes in search of her birth mother. Instead she finds Nikki, her mother’s sister. Aunt Nikki isn’t what Margo expects, and she brings upsetting news: Margo’s mother is dead. Worse, she was murdered years ago, and her killer is still at large-and sending Nikki threatening letters. Margo is torn. Should she stay out of this mess, or try to find justice? But then Margo receives a letter, too. Someone out there has been waiting and watching,
and in Margo sees the spitting image of her mother…Darkly funny and deeply affecting,

The Less Dead is a sharply modern new thriller from the bestselling author of Conviction, and a surprisingly moving story of daughters and mothers, secrets and choices, and how the search for the truth-and a long-hidden killer-will lead
one woman to find herself.”

From the bestselling author of Nixonland and The Invisible Bridge comes the dramatic conclusion of how conservatism took control of American political power.

Over two decades, Rick Perlstein has published three definitive works about the emerging dominance of conservatism in modern American politics. With the saga’s final installment, he has delivered yet another stunning literary and historical achievement.

In late 1976, Ronald Reagan was dismissed as a man without a political future: defeated in his nomination bid against a sitting president of his own party, blamed for President Gerald Ford’s defeat, too old to make another run. His comeback was fueled by an extraordinary confluence: fundamentalist preachers and former segregationists reinventing themselves as militant crusaders against gay rights and feminism; business executives uniting against regulation in an era of economic decline; a cadre of secretive “New Right” organizers deploying state-of-the-art technology, bending political norms to the breaking point—and Reagan’s own unbending optimism, his ability to convey unshakable confidence in America as the world’s “shining city on a hill.”

Meanwhile, a civil war broke out in the Democratic party. When President Jimmy Carter called Americans to a new ethic of austerity, Senator Ted Kennedy reacted with horror, challenging him for reelection. Carter’s Oval Office tenure was further imperiled by the Iranian hostage crisis, the Soviet invasion of Afghanistan, near-catastrophe at a Pennsylvania nuclear plant, aviation accidents, serial killers on the loose, and endless gas lines.

Backed by a reenergized conservative Republican base, Reagan ran on the campaign slogan “Make America Great Again”—and prevailed. Reaganland is the story of how that happened, tracing conservatives’ cutthroat strategies to gain power and explaining why they endure four decades later.

In Hysteria, we meet a young woman an hour into yet another alcohol-fueled, masochistic, sexual bender at her local bar. There is a new bartender working this time, one she hasn’t seen before, but who can properly make a drink. He looks familiar, and as she is consumed by shame from her behavior the previous week— hooking up with her parents’ colleague and her roommate’s brother— she also becomes convinced that her Brooklyn bartender is actually Sigmund Freud. They embark on a relationship, and she is forced to confront her past through the prism of their complex, revealing, and sometimes shocking meetings. With the help of Freud—or whoever he is—she begins to untangle her Oedipal leanings, her upbringing, and her desires. Jessica Gross’s debut is unflinchingly perceptive and honest, darkly funny, and unafraid of mining the deepest fears of contemporary lives.

Losers: Dispatches from the Others Side of the Scoreboard edited by Mary Pilon & Louisa Thomas

Twenty-two notable writers—including Bob Sullivan, Abby Ellin, Mike Pesca, Sir Arthur Conan Doyle, Louisa Hall, and Gay Talese—examine the untold stories of the losers, and in doing so reveal something raw and significant about what it means to be human

The locker rooms of winning teams are crowded with coaches, family, and fans. Reporters flock to the athletes, brimming with victory and celebration, to ask, How does it feel? In contrast, the locker rooms of the losing teams are quiet and awkward, and reporters tend to leave quickly, reluctant to linger too long around loss.

But, as sports journalists Mary Pilon and Louisa Thomas argue, losing is not a phenomenon to be overlooked, and in Losers, they have called upon novelists, reporters, and athletes to consider what it means to lose. From the Olympic gymnast who was forced to surrender her spot to another teammate, to the legacy of Bill Buckner’s tenth-inning error in the 1986 World Series, to LeBron James’s losing record in the NBA Finals, these essays range from humorous to somber, but all are united by their focus on defeat. Interweaving fourteen completely new and unpublished pieces alongside beloved classics of the genre, Losers turns the art of sports writing on its head and proves that there is inspiration to be found in stories of risk, resilience, and getting up after you’ve been knocked down. 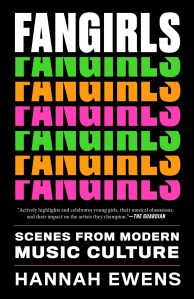 “To be a fan is to scream alone together.” This is the discovery Hannah Ewens makes in Fangirls: how music fandom is at once a journey of self-definition and a conduit for connection and camaraderie; how it is both complicated and empowering; and how now, more than ever, fandoms composed of girls and young queer people create cultures that shape and change an entire industry.

This book is about what it means to be a fangirl.

Speaking to hundreds of fans from the UK, US, Europe, and Japan, Ewens tells the story of music fandom using its own voices, recounting previously untold or glossed-over scenes from modern pop and rock music history. In doing so, she uncovers the importance of fan devotion: how Ariana Grande represents both tragedy and resilience to her followers, or what it means to meet an artist like Lady Gaga in person. From One Directioners, to members of the Beyhive, to the author’s own fandom experiences, this book reclaims the “fangirl” label for its young members, celebrating their purpose, their power, and, most of all, their passion for the music they love.

Agent Running In the Field by John Le Carré

Know My Name by Chanel Miller

“The Revisioners is a captivating read about multiple generations of intriguing women. Margaret Wilkerson-Sexton tackles big subjects with such nuance, her incisiveness is striking. This combined with the fact that she never lets her characters lose their truth makes her a powerful storyteller who everybody should be reading.”