Inventory Manager Molly joins us on the blog to make one very big reading recommendation for your long nights at home this winter…even if you’re not the biggest sci-fi reader.

A beginning is a very delicate time. Know then that it is the year two thousand and twenty. In this time the most precious substance in the universe is a Diverting Pastime To Be Enjoyed At Home. The Pastime exists on only one planet in the entire universe. The planet is a book. Also known as Dune.

It wasn’t long into March’s lockdown that I found myself in dire need of a project. I’d plucked around

on a spare ukelele,  I’d perfected a new skin routine, I’d taken 78,000 walks, but I craved something with focus, something long term. So I texted my friend — Wanna start a Dune podcast?

The premise was simple: We’d read through Frank Herbert’s seminal 1960s soap opera fantasy classic book-club style, taking it four-five chapters at a time, and talk about all the movies we were mainlining in our ample free time. Now, I must tell you, before embarking on this project, Dune was not a big part of my life. I’d read the book once in high school and though the experience was memorable (I’d read it during my heavy metal drummer phase, taking it in on fumes of incense and Led Zeppelin shredding the mechanics of my iPod shuffle), I would have a had hard time telling you much about it besides that giant sandworms were somehow involved. I’m also not the biggest sci-fi/fantasy reader. The Lord of the Rings has my heart but it took my almost 4 years to complete the books. I have trouble with made up rules for made up lands, often calling myself sci-fi illiterate; the stuff just doesn’t always stick. But as days turned to weeks turned to months of our collective new normal, I found myself growing more and more fond of the desert planet, its lore, its author, and all the fandom had to offer. I’m hooked on the spice.

This is a fun time to be a Dune fan.

The first book of the series opens in the year 10,191 on the planet Caladan, over which Duke Leto rules under the House Atreides. He, his “partner” (it’s complicated) Jessica, and his son, the young and highly destined Paul Atreides, are gearing up to make the move from their home planet to Arrakis, where Leto is meant to play steward over the planet’s coveted resource— melange. Melange, a highly addictive spice that when consumed expands its user’s awareness and makes interspace travel possible, is serious business in this universe. In fact, it is *the* business, with every empire within 10 billion lightyears (give or take) vying for their share of the spice reserves. Duke Leto believes he is simply following orders in the chain of command by uprooting his family from their beloved, watery Caladan to the dry wilds of Arrakis. Unfortunately, the powerful and warring factions of House Harkonnen and the Padishah Empire have other plans in mind.

Meanwhile, we’re introduced to Paul, the 14-year-old ducal heir with mad skills as both aspiring mentat (think Spock-like logic-ing abilities) and Bene Gesserit student (think Jedi mind tricks taught by an ancient order of zen space witches) (here’s a good time to point out that Star Wars, which came well after Dune, shares an eyebrow-raising amount of DNA). Paul can do it all; he’s got knife training for days, he can control the actions of others by manipulating the tone of his voice, and he just might be the long-awaited product of generations of careful, political Bene Gesserit breeding, the prophesized leader who can bridge the gap between male and female, left brain and right brain, good and evil, propelling all of humanity to make its next evolutionary leap forward along the Golden Path, a figure known as the Kwisatz Haderach. Or, he may be a malignant mutation, the likes of which this universe has never known and never saw coming. The story takes off from there.

In the debate over whether fantasy should be pure escapism, these are books that make clear moral choices…

This is a fun time to be a Dune fan. I grew up in a sea of Trekkies and Luke Skywalkers, bemused but not captivated by their tales of drama  in a galaxy far blah blah blah. But with Denis Villeneuve’s star-studded adaptation coming out, it is now the Dune-ites’ (Dunerinos? HerbertHeads? What do you call a Dune fan? A smart person with excellent taste) time to shine. Sure, it’s delayed until next October, but I can only be optimistic that the extra time will encourage more folks to hop aboard the ornithopter and gush about just how perfect a Paul Atreides Timothèe Chalamet will make (don’t even get me started on Jason Mamoa as Duncan Idaho — that miracle alone is getting me through 2020).

Previous adaptations, including one by David Lynch, have achieved their own cult-classic status due, often, to their sheer absurdity (helloooo Sting in green latex! Bless), but this one feels like it could be it. With Arrival and Blade Runner 2049, Villeneuve has proven himself capable of constructing sophisticated, gorgeous sci-fi films, almost everything was set on location in Jordan, the cast is psyched on it, and my guess is that the novelty of gathering at a theater will still be fresh this time

next year. It also just feels so good to commit to a fandom when something so exciting is on the horizon. One of my own nontraditional hallmarks of time passing these last 9 months came when the trailer dropped and I suddenly found this meme very relatable:

Adding to the fandom’s appeal, the series is remarkably forward-thinking, certainly the benevolent if slightly esoteric stoner friend to say the jock-y Marvel Universe. Herbert was writing in a time when sci-fi was being used by authors as a way to rebuke and carve out new political futures in response to the fascism, nuclear proliferation, and world war that had defined their century. Herbert’s vision is environmentalist, anti-cult, anti-authoritarian, pro-indigenous, anti-imperialist — all the good stuff in my hippy heart. It’s a classic underdog story, in which the Fremen, the people native to Arrakis whose labor has been exploited and resources diminished by outside forces, take on the Powers that Be. He draws inspiration from cultures and religions many Americans (still) are content to think of as “kinda different” at best and existentially threatening at worst. There’s a strong showing for complex female characters (more than one!), who are dynamic, distinct, and are frankly some of my favorite I’ve ever read. It’s characters aren’t monolithically white. In the debate over whether fantasy is/should be pure escapism, these are books that make clear moral choices that stand in for Herbert’s view on our very human planet and its history, and these choices often fall in favor of the humane over the powerful. He does slip up. The characterization of one of the book’s central villains features a particularly egregious homophobic trope and even though he incorporates well-drawn women and non-white characters, they still play mostly supporting roles.

Still, unlike another purveyor of fantasy realms I could mention, my instinct says that Herbert wouldn’t double down on any of these choices. In fact, he’s famously encouraging of the many interpretations of his books, refusing to provide definitive answers to the series’ more ambiguous storylines. If I had to pick one theme as most important from the book’s many, I would go with the emphasis on how crucial it is to think critically for yourself. There is no God, authors very much included. Reading him, I get the sense that he knows better than anyone this is all made up (the books are funny, borderline campy and melodramatic), but is also deeply interested in the conversation he’s having with the reader, with humanity, with his own human experience — it’s just up to you to answer.

All this goes to say — I’m grateful to have found this series in this time. Like I’m sure many of you, books have always been welcome companions, especially during uncertain times. This universe has surprised me, made me laugh, frustrated me, given me a thing or two to think about,  and, most of all, it’s lifted my spirits when they needed it. And hey, If not for any reason outlined above, read it for the sandworms for they truly are the literary equivalent to a face-melting guitar solo. Okay then, to the dunes! 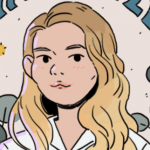 Molly Moore is an Inventory Manager at BookPeople. You can shop her book recommendations here and listen to her podcast, Sand: A Podcast about Dune where all podcasts are sold.

Dune and the subsequent books in the Dune series are available at BookPeople in-store and online now.

One thought on “Spice Up Your Life: The Time Has Finally Come for You to Read ‘Dune’”