In case you needed another reason to stay inside, our new releases this week have us booking hours-long reading dates after we close up for the night. Boisterous histories, revelatory discoveries and a pair of eye-opening debuts. Scroll down for more info on the books turning heads in this final month of 2020.

Bag Man: The Wild Crimes, Audacious Cover-up, and Spectacular Downfall of a Brazen Crook in the White House by Rachel Maddow & Michael Yarvitz

The knockdown, drag-out, untold story of the other scandal that rocked Nixon’s White House, and reset the rules for crooked presidents to come—with new reporting that expands on Rachel Maddow’s Peabody Award-nominated podcast

Is it possible for a sitting vice president to direct a vast criminal enterprise within the halls of the White House? To have one of the most brazen corruption scandals in American history play out while nobody’s paying attention? And for that scandal to be all but forgotten decades later?

The year was 1973, and Spiro T. Agnew, the former governor of Maryland, was Richard Nixon’s second-in-command. Long on firebrand rhetoric and short on political experience, Agnew had carried out a bribery and extortion ring in office for years, when—at the height of Watergate—three young federal prosecutors discovered his crimes and launched a mission to take him down before it was too late, before Nixon’s impending downfall elevated Agnew to the presidency. The self-described “counterpuncher” vice president did everything he could to bury their investigation: dismissing it as a “witch hunt,” riling up his partisan base, making the press the enemy, and, with a crumbling circle of loyalists, scheming to obstruct justice in order to survive.

In this blockbuster account, Rachel Maddow and Michael Yarvitz detail the investigation that exposed Agnew’s crimes, the attempts at a cover-up—which involved future president George H. W. Bush—and the backroom bargain that forced Agnew’s resignation but also spared him years in federal prison. Based on the award-winning hit podcast, Bag Man expands and deepens the story of Spiro Agnew’s scandal and its lasting influence on our politics, our media, and our understanding of what it takes to confront a criminal in the White House.

Food critic Dorothy Daniels loves what she does. Discerning, meticulous, and very, very smart, Dorothy’s clear mastery of the culinary arts make it likely that she could, on any given night, whip up a more inspired dish than any one of the chefs she writes about. Dorothy loves sex as much as she loves food, and while she has struggled to find a long-term partner that can keep up with her, she makes the best of her single life, frequently traveling from Manhattan to Italy for a taste of both.
But there is something within Dorothy that’s different from everyone else, and having suppressed it long enough, she starts to embrace what makes Dorothy uniquely, terrifyingly herself. Recounting her life from a seemingly idyllic farm-to-table childhood, the heights of her career, to the moment she plunges an ice pick into a man’s neck on Fire Island, Dorothy Daniels show us what happens when a woman finally embraces her superiority.

A satire of early foodieism, a critique of how gender is defined, and a showcase of virtuoso storytelling, Chelsea G. Summers’ A Certain Hunger introduces us to the food world’s most charming psychopath and an exciting new voice in fiction. 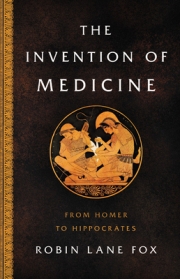 The Invention of Medicine: From Homer to Hippocrates by Robin Lane Fox

Medical thinking and observation were radically changed by the ancient Greeks, one of their great legacies to the world. In the fifth century BCE, a Greek doctor put forward his clinical observations of individual men, women, and children in a collection of case histories known as the Epidemics. Among his working principles was the famous maxim “Do no harm.” In The Invention of Medicine, acclaimed historian Robin Lane Fox puts these remarkable works in a wider context and upends our understanding of medical history by establishing that they were written much earlier than previously thought. Lane Fox endorses the ancient Greeks’ view that their texts’ author, not named, was none other than the father of medicine, the great Hippocrates himself. Lane Fox’s argument changes our sense of the development of scientific and rational thinking in Western culture, and he explores the consequences for Greek artists, dramatists and the first writers of history. Hippocrates emerges as a key figure in the crucial change from an archaic to a classical world.
Elegantly written and remarkably learned, The Invention of Medicine is a groundbreaking reassessment of many aspects of Greek culture and city life. 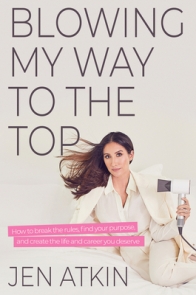 Blowing My Way to the Top by Jen Atkin

Hailed by the New York Times as “the most influential hair stylist in the world,” Jen Atkin is a celebrated businesswoman, influencer, and stylist and friend to A-list celebrities like the Kardashian-Jenners and Chrissy Teigen. But Jen’s success didn’t arrive overnight. Her glamorous, jet-setting lifestyle came from years of hard work, humility, and hustle. In Blowing My Way to the Top, Jen shatters the illusion of effortless, instant success that permeates social media to reveal the sweat, dedication, and drive it really takes to make it.

In this inspiring, insightful, and laugh-out-loud funny book, Jen chronicles her remarkable journey and shares what she’s learned along the way. From growing up in a conservative Mormon community where girls were discouraged from pursuing their ambitions, to striking out on her own and finding success on the celebrity style circuit, to building the cult-status brand OUAI—Jen reveals with refreshing candor the lessons, mistakes, and memorable moments that have paved her road to success.

Jen also offers insight into the values that have allowed her to thrive in the modern, digital landscape, including the importance of creating authentic content, investing in community, and building social conscious into the ethos of a business. And as a trailblazer in a male-dominated industry, Jen speaks frankly about the challenges she’s faced and provides crucial advice for other women, from the importance of running your business like a feminist to building camaraderie amid the competition to learning to navigate the work and life issues that impact women most.

At the end of the day, Jen has one simple message: If I can do it, you can too. Blowing My Way to the Top is destined to become the must-read career guide for a new generation, empowering readers everywhere with the permission to dream big—and the tools to make those dreams a reality.

Don’t miss out—BookPeople has partnered with HarperWave to present a special book launch event with Jen, live on Crowdcast with special guest Marianna Hewitt! Tickets are still available, get yours here!

The Missing American by Kwei Quartey

The Light of All That Falls by James Islington