We close out a month of stellar new releases with one of the best lineups yet! Below you can read up on the exciting titles by authors we’ll be hosting in-store in the coming weeks, an thrilling return to a fantasy world, and a life-affirming memoir (among other fabulous new reads). Find your next favorite read here! 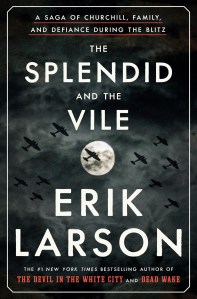 The Splendid and the Vile by Erik Larson

Erik Larson returns with a brand new, intimate look at the early days of World War II and it’s newly-elected prime minister, Wintston Churchill, with this one-of-a-kind re-telling of those turbulent days.

The stage is set at the book’s outset: Adolf Hitler has invaded Holland and Belgium. Poland and Czechoslovakia have already fallen, and the Dunkirk evacuation is just two weeks away. For the next twelve months, Hitler will wage a relentless bombing campaign, killing 45,000 Britons.

In The Splendid and the Vile, Erik Larson shows, in cinematic detail, how Churchill taught the British people “the art of being fearless.” It is a story of political brinkmanship, but it’s also an intimate domestic drama, set against the backdrop of Churchill’s prime-ministerial country home, Chequers; his wartime retreat, Ditchley, and of course 10 Downing Street in London. Drawing on diaries, original archival documents, and once-secret intelligence reports—some released only recently—Larson provides a new lens on London’s darkest year through the day-to-day experience of Churchill and his family: his wife, Clementine; their youngest daughter, Mary, who chafes against her parents’ wartime protectiveness; their son, Randolph, and his beautiful, unhappy wife, Pamela; Pamela’s illicit lover, a dashing American emissary; and the advisers in Churchill’s “Secret Circle,” to whom he turns in the hardest moments.

The Splendid and the Vile takes readers out of today’s political dysfunction and back to a time of true leadership, when, in the face of unrelenting horror, Churchill’s eloquence, courage, and perseverance bound a country, and a family, together. 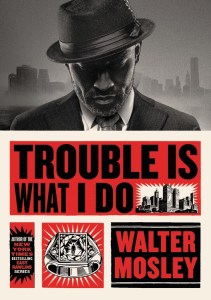 Trouble Is What I Do by Walter Mosley

The inimitable Walter Mosley’s back with this punchy novella featuring the morally ambiguous PI, Leonid McGill!
Trouble Is What I Do brings Leonid to the doorstep on of Philip “Catfish” Worry, a 92-year-old Mississippi bluesman who needs Leonid’s help with a simple task: deliver a letter revealing the black lineage of a wealthy heiress and her corrupt father. The opportunity to do a simple favor while shocking the prevailing elite is too much for Leonid to resist.
But when a famed and feared assassin puts a hit on Catfish, Leonid has no choice but to confront the ghost of his own felonious past. Working to protect his client and his own family, Leonid must reach the heiress on the eve of her wedding before her powerful father kills those who hold their family’s secret.
Scott Montgomery of MysteryPeople, who went on this ride a little earlier than us, says, “Walter Mosley carry this tale on a wonderful voice. McGill’s dialogue and interior thought have the ring of electric blues, capturing his life’s humor, humanity, and violence.” 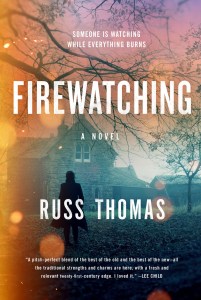 When financier Gerald Cartwright disappeared from his home six years ago, it was assumed he’d gone on the run from his creditors. But then a skeleton is found bricked up in the cellar of Cartwright’s burned-out mansion, and it becomes clear Gerald never left alive.

As the sole representative of South Yorkshire’s Cold Case Review Unit, Detective Sergeant Adam Tyler is not expected to get results, but he knows this is the case that might finally kick start his floundering career.

Luckily, he already has a suspect.

Unluckily, that suspect is Cartwright’s son, the man Tyler slept with the night before.

Keeping his possible conflict-of-interest under wraps, Tyler digs into the case alongside Amina Rabbani, an ambitious young Muslim constable and a fellow outsider seeking to prove herself on the force. Soon their investigation will come up against close-lipped townsfolk, an elderly woman with dementia who’s receiving mysterious threats referencing a past she can’t remember, and an escalating series of conflagrations set by a troubled soul intent on watching the world burn…

Don’t miss your chance to meet Russ Thomas on March 3rd at 7PM. He’ll be in conversation with MysteryPeople’s own Scott Montgomery and follow that up with a signing. We hope to see you there! 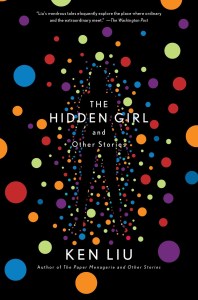 The Hidden Girl and Other Stories by Ken Liu

There’s a lot to chew on in The Hidden Girl and Other Stories, the much-anticipated second volume of short stories from award-winning author Ken Liu.

This collection includes a selection of his science fiction and fantasy stories from the last five years—sixteen of his best—plus a new novelette.

In addition to these seventeen selections, The Hidden Girl and Other Stories also features an excerpt from book three in the Dandelion Dynasty series, The Veiled Throne! 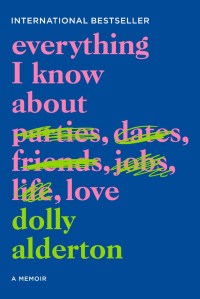 Everything I Know About Love by Dolly Alderton

When it comes to the trials and triumphs of becoming an adult, journalist and former Sunday Times columnist Dolly Alderton has seen and tried it all. In her memoir, she vividly recounts falling in love, finding a job, getting drunk, getting dumped, realizing that Ivan from the corner shop might just be the only reliable man in her life, and that absolutely no one can ever compare to her best girlfriends. Everything I Know About Love is about bad dates, good friends and—above all else— realizing that you are enough.

Glittering with wit and insight, heart and humor, Dolly Alderton’s unforgettable debut weaves together personal stories, satirical observations, a series of lists, recipes, and other vignettes that will strike a chord of recognition with women of every age—making you want to pick up the phone and tell your best friends all about it. Like Bridget Jones’ Diary but all true, Everything I Know About Love is about the struggles of early adulthood in all its terrifying and hopeful uncertainty. 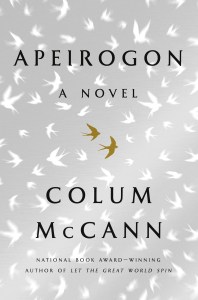 Touted as Colum McCann’s most ambitious work to date, Apeirogon—named for a shape with a countably infinite number of sides—is a tour de-force concerning friendship, love, loss, and belonging.

Bassam Aramin is Palestinian. Rami Elhanan is Israeli. They inhabit a world of conflict that colors every aspect of their daily lives, from the roads they are allowed to drive on to the schools their daughters, Abir and Smadar, each attend, to the checkpoints both physical and emotional that they must negotiate.

Their worlds shift irreparably after ten-year-old old Abir is killed by a rubber bullet and thirteen-year-old Smadar becomes the victim of suicide bombers. When Bassam and Rami learn of one another’s stories, they recognize the loss that connects them and they attempt to use their grief as a weapon for peace.

McCann crafts Apeirogon out of a universe of fictional and non-fictional material. He crosses centuries and continents, stitching time, art, history, nature, and politics together in a tale both heartbreaking and hopeful. Musical, cinematic, muscular, delicate, and soaring, Apeirogon is a novel for our times. 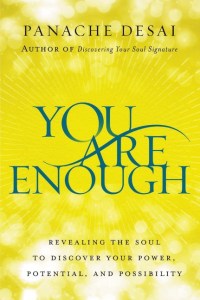 You Are Enough by Panache Desai

Get psyched for the new release from Panache Desai! The spiritual thought-leader and featured guest on Oprah’s SuperSoul Sunday helps us learn to quiet fear and anxiety and discover the powerful wholeness that exists within us all in this inspiring and affirmative guide.

Desai, who believes the soul — whole, unbroken, at peace, and at one with the life source — already exists beneath the clutter of our anxieties, is here to provide that extra push to see it. It is not something we have to work to develop—it is our birthright.

Straightforward, non-judgmental, and approachable, You Are Enough combines personal narrative, clear and inspiring philosophy, and prescriptive practices to help readers best see how to approach our lives and the world from a perspective that understands our fears are not who we are. The goal is simple: to guide readers through radical self-acceptance toward a life of ultimate peace and fulfillment.

Beautifully designed, this enlightening volume by a fresh voice shows us that while life may have caused us to forget our power, potential, light, and love, they are always there, just waiting to be discovered.

Signing line tickets are now available to see Panache Desai read from and sign You Are Enough when he comes to BookPeople on March 2nd at 7PM!

Booksellers fell in love with Dan Vyleta’s Smoke, and now, in Soot, we finally get to return to this world that combines the best of Dickens and dystopian thrillers.

The year is 1909. It has been ten years since Thomas Argyle, Charlie Cooper and Livia Naylor set off a revolution by releasing Smoke upon the world. They were raised to think Smoke was a sign of sin manifested, but learned its suppression was really a means of controlling society.

The trio believed that freeing the Smoke would bring down the oppressive power structure and create a fair and open society. But the consequences were far greater than they had imagined, and the world has fractured.

Erasmus Renfrew, the avowed enemy of Smoke, is now Lord Protector of what remains of the English state. Charlie and Livia live in Minetowns — an egalitarian workers’ community in the north of England which lives by Smoke. Thomas Argyle, meanwhile, is in India on a clandestine mission to find out the origins of Smoke, and why the still-powerful Company is mounting an expedition in the Himalayas.

Their paths converge with Mowgli, the native whose body was used to trigger the tempest that unleashed the Smoke, and Eleanor Renfrew, Erasmus’ niece who was the subject of his cruel experiments in suppressing Smoke, is in hiding from her uncle in provincial Canada.

Inextricably tied to the other, each one seeks to discover the true nature of Smoke, and thereby control its power. A cataclysmic confrontation looms, and the Smoke will either bind them together or rend the world. Jump back in now to see what comes next!

These new release titles are all available in-store and online today! We hope to see you soon!

And be sure to check in on this page next week where we’ll do it all over again!