Ahead of her book launch at BookPeople on March 9th at 7PM, local author Deb Olin Unferth took a few questions from BookPeople booksellers about her latest novel, Barn 8. It tells the story of an improbable chicken heist by a legion of ragtag animal rights activists. The title has drawn praise from reviewers at Kirkus Reviews, Publisher’s Weekly, Book Marks, and is an instant bookseller favorite. Read more here.

BookPeople: Where did the idea for a great chicken heist novel germinate?

Deb Olin Unferth: No one likes those huge industry farms that hold so many thousands of animals in tiny cages. Ever since I learned about them I’ve been dreaming about emptying them. One day the idea started to formulate into an image and then a story.

BP: The book’s quite thorough in its detail of the poultry industrial complex. Where did your research take you? What were you most surprised by along the way?

DOU: I did a huge amount of research! I interviewed dozens of farmers and animal rights lawyers and undercover investigators. I read piles of books about chickens. I went to an egg conference, visited a large industrial farm, much like the one in the book. I spent a lot of time with chickens.

There were a lot of surprises along the way. One was, as I got to know the investigators and activists, I realized that if these people wanted to do a heist like this–if they saw a reason to–they would. Activists are determined.

BP: Are there any books or films that helped you move the story along?

Annie Potts’s Chicken for the mind of a chicken.

Alex Haley’s Roots for a big picture look at civilization and destiny.

BP: There’s a story about the book’s cover, I know. How’d you land on the final copy in front of us now.

DOU: While I was researching chickens, I came across a painting done by the artist Yvette Watt. Using her own blood as a palette, she’d painted a chicken staring out of the canvas and into the face of the observer — studying me, essentially. I was so struck by it. I purchased it and hung it on my wall and stared at it as I wrote. It helped me think about chicken subjectivity. I asked the publisher to use it as the cover of the book. It didn’t quite work, but the book designer, Kimberly Glyder — she is incredible — adapted it. The cover looks like there is a chicken staring through the bars of a cage at you, studying you, thinking about you. I love it.

BP: I know you have a chicken tattoo. Can you tell more about it and did it shape, in any way, the novel you wrote?

DOU: Yes, I did get a chicken tattoo while writing the book. It was in solidarity with the chickens, yes, but also it was a record of who I am in this moment, this decade, who I’ve become. My other tattoo is of a bird in flight — I got it when I was 18. Now I’m a hen, settled down, no longer in flight but still a bird. 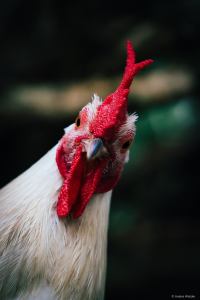 BP: I found the humor in the book not only charming, but surprising. How does humor function for you while writing? Do you plan when you’d like to put in a funny moment, or do they just spring up?

DOU: I tend to be laughing simultaneously while feeling other emotions: rage, awe, grief, joy. I’m laughing even when I’m throwing things or am gasping with surprise. So the humor rolls in with the rest.

BP: There’s a great variety of activists in the novel. What draws you to them as characters?

DOU: They are fascinating people! I like people who have vision, ideas, who want to change the world. They have so much to gain and lose. They have such complex motivations. Someone who looks only to better their own lot? Not as interesting.

BP: I was really moved by the idea of your life splitting into two timelines after a cataclysmic event, and always wondering how the you in the other timeline is doing/what they would think of your life choices. Where did the idea come from?

DOU: I often think about what my brother would be doing if he were still alive. I think, “He would have loved that!”  I’m not sure if that’s where that plot element came from, but the thought drifts through my mind.

BP: You’ve written a few novels now, plenty of short stories, a memoir, and a graphic novel even. What’s next?

DOU: I have started another novel. I’m not sure where it will go yet. It’s sci-fi, people on Mars. I’d also like to write some nonfiction, some essays, about climate change, citizen responsibility, happy stuff like that.

BP: Do you have any recommendations for further reading on the subject of mass food production? Climate change?

Confessions of a Recovering Environmentalist by Paul Kingsnorth

The Uninhabitable Earth by David Wallace-Wells

BP: What do we all need a little more of? A little less?

About the Author: Deb Olin Unferth is the author of six books. She has received a Guggenheim Fellowship and three Pushcart Prizes, and was a National Book Critics Circle Award finalist. Her work has appeared in Granta, Harper’s Magazine, McSweeney’s, and The Paris Review.

Learn more when you visit BookPeople on March 9th for the launch of Barn 8 and get a book signed, too. We hope to see you there!

One thought on “In Solidarity with The Chickens: An Interview with Deb Olin Unferth”