What does it mean to be an American? What is freedom? How do we avoid making flawed decisions? This week’s new releases are concerned with big questions and if you’re ready to tackle them, we’ll be ready to put them in your hands. Read on for more!

The Anthropocene Revised: Essays on a Human-Centered Planet by John Green

A deeply moving collection of personal essays from John Green, the #1 bestselling author of The Fault in Our Stars and Turtles All the Way Down.

“Every page is full of insight. I loved it.” –Roman Mars, creator and host of 99% Invisible

The Anthropocene is the current geologic age, in which humans have profoundly reshaped the planet and its biodiversity. In this remarkable symphony of essays adapted and expanded from his groundbreaking podcast, bestselling author John Green reviews different facets of the human-centered planet on a five-star scale—from the QWERTY keyboard and sunsets to Canada geese and Penguins of Madagascar.

Funny, complex, and rich with detail, the reviews chart the contradictions of contemporary humanity. As a species, we are both far too powerful and not nearly powerful enough, a paradox that came into sharp focus as we faced a global pandemic that both separated us and bound us together.

John Green’s gift for storytelling shines throughout this masterful collection. The Anthropocene Reviewed is a open-hearted exploration of the paths we forge and an unironic celebration of falling in love with the world. 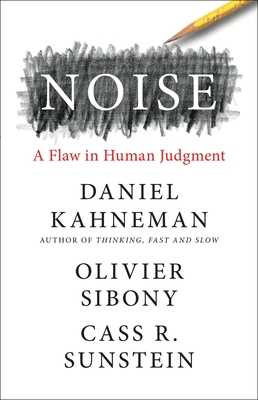 Noise: A Flaw in Human Judgement by Daniel Kahneman

From the Nobel Prize-winning author of Thinking, Fast and Slow and the coauthor of Nudge, a revolutionary exploration of why people make bad judgments and how to make better ones—”full of novel insights, rigorous evidence, engaging writing, and practical applications” (Adam Grant).

Imagine that two doctors in the same city give different diagnoses to identical patients—or that two judges in the same courthouse give markedly different sentences to people who have committed the same crime. Suppose that different interviewers at the same firm make different decisions about indistinguishable job applicants—or that when a company is handling customer complaints, the resolution depends on who happens to answer the phone. Now imagine that the same doctor, the same judge, the same interviewer, or the same customer service agent makes different decisions depending on whether it is morning or afternoon, or Monday rather than Wednesday. These are examples of noise: variability in judgments that should be identical.

In Noise, Daniel Kahneman, Olivier Sibony, and Cass R. Sunstein show the detrimental effects of noise in many fields, including medicine, law, economic forecasting, forensic science, bail, child protection, strategy, performance reviews, and personnel selection. Wherever there is judgment, there is noise. Yet, most of the time, individuals and organizations alike are unaware of it. They neglect noise. With a few simple remedies, people can reduce both noise and bias, and so make far better decisions.

Packed with original ideas, and offering the same kinds of research-based insights that made Thinking, Fast and Slow and Nudge groundbreaking New York Times bestsellers, Noise explains how and why humans are so susceptible to noise in judgment—and what we can do about it.

“So, you want to know more about Bob Dylan? Read Clinton Heylin’s new book. You’ll get all you need.” — Graham Nash, of Crosby, Stills, Nash & Young

In 2016 Bob Dylan sold his personal archive to the George Kaiser Foundation in Tulsa, Oklahoma, reportedly for $22 million. As the boxes started to arrive, the Foundation asked Clinton Heylin – author of the acclaimed Bob Dylan: Behind the Shades and ‘perhaps the world’s authority on all things Dylan’ (Rolling Stone) – to assess the material they had been given. What he found in Tulsa – as well as what he gleaned from other papers he had recently been given access to by Sony and the Dylan office – so changed his understanding of the artist, especially of his creative process, that he became convinced that a whole new biography was needed. It turns out that much of what previous biographers – Dylan himself included – have said is wrong.

With fresh and revealing information on every page A Restless, Hungry Feeling tells the story of Dylan’s meteoric rise to fame: his arrival in early 1961 in New York, where he is embraced by the folk scene; his elevation to spokesman of a generation whose protest songs provide the soundtrack for the burgeoning Civil Rights movement; his alleged betrayal when he ‘goes electric’ at Newport in 1965; his subsequent controversial world tour with a rock ’n’ roll band; and the recording of his three undisputed electric masterpieces: Bringing it All Back Home, Highway 61 Revisited and Blonde on Blonde. At the peak of his fame in July 1966 he reportedly crashes his motorbike in Woodstock, upstate New York, and disappears from public view. When he re-emerges, he looks different, his voice sounds different, his songs are different.

Clinton Heylin’s meticulously researched, all-encompassing and consistently revelatory account of these fascinating early years is the closest we will ever get to a definitive life of an artist who has been the lodestar of popular culture for six decades. 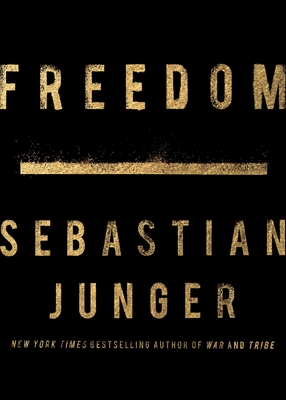 A profound rumination on the concept of freedom from the New York Times bestselling author of Tribe.

Throughout history, humans have been driven by the quest for two cherished ideals: community and freedom. The two don’t coexist easily. We value individuality and self-reliance, yet are utterly dependent on community for our most basic needs. In this intricately crafted and thought-provoking book, Sebastian Junger examines the tension that lies at the heart of what it means to be human.

For much of a year, Junger and three friends—a conflict photographer and two Afghan War vets—walked the railroad lines of the East Coast. It was an experiment in personal autonomy, but also in interdependence. Dodging railroad cops, sleeping under bridges, cooking over fires, and drinking from creeks and rivers, the four men forged a unique reliance on one another.

In Freedom, Junger weaves his account of this journey together with primatology and boxing strategy, the history of labor strikes and Apache raiders, the role of women in resistance movements, and the brutal reality of life on the Pennsylvania frontier. Written in exquisite, razor-sharp prose, the result is a powerful examination of the primary desire that defines us.

Punch Me Up to the Gods: A Memoir by Brian Broome

Punch Me Up to the Gods introduces a powerful new talent in Brian Broome, whose early years growing up in Ohio as a dark-skinned Black boy harboring crushes on other boys propel forward this gorgeous, aching, and unforgettable debut. Brian’s recounting of his experiences—in all their cringe-worthy, hilarious, and heartbreaking glory—reveal a perpetual outsider awkwardly squirming to find his way in. Indiscriminate sex and escalating drug use help to soothe his hurt, young psyche, usually to uproarious and devastating effect. A no-nonsense mother and broken father play crucial roles in our misfit’s origin story. But it is Brian’s voice in the retelling that shows the true depth of vulnerability for young Black boys that is often quietly near to bursting at the seams.

Cleverly framed around Gwendolyn Brooks’s poem “We Real Cool,” the iconic and loving ode to Black boyhood, Punch Me Up to the Gods is at once playful, poignant, and wholly original. Broome’s writing brims with swagger and sensitivity, bringing an exquisite and fresh voice to ongoing cultural conversations about Blackness in America. 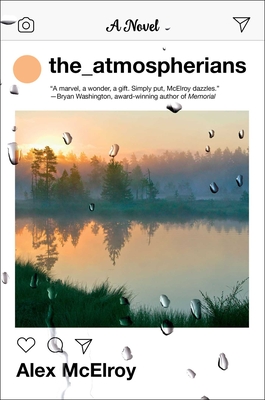 The Atmospherians: A Novel by Alex McElroy

A “dazzling” (Bryan Washington, author of Lot) and brilliantly satirical debut novel for fans of Women Talking and Red Clocks about two best friends—a disgraced influencer and a struggling actor—who form The Atmosphere, a cult designed to reform problematic men.

Sasha Marcus was once the epitome of contemporary success: an internet sensation, social media darling, and a creator of a high profile wellness brand for women. But a confrontation with an abusive troll has taken a horrifying turn, and now she’s at rock bottom: canceled and doxxed online, fired from her waitress job and fortressed in her apartment while men’s rights protestors rage outside. All that once glittered now condemns.

Sasha confides in her oldest childhood friend, Dyson—a failed actor with a history of body issues—who hatches a plan for Sasha to restore her reputation by becoming the face of his new business venture, The Atmosphere: a rehabilitation community for men. Based in an abandoned summer camp and billed as a workshop for job training, it is actually a rigorous program designed to rid men of their toxic masculinity and heal them physically, emotionally, and socially. Sasha has little choice but to accept. But what horrors await her as the resident female leader of a crew of washed up, desperate men? And what exactly does Dyson want?

Explosive and wickedly funny, this “Fight Club for the millennial generation” (Mat Johnson, author of Pym) peers straight into the dark heart of wellness and woke-ness, self-mythology and self-awareness, by asking what happens when we become addicted to the performance of ourselves.

Barrett Swanson embarks on a personal quest across the United States to uncover what it means to be an American amid the swirl of our post-truth climate in this collection of critically acclaimed essays and reportage.

A trip with his brother to a New York psychic community becomes a rollicking tour through the world of American spiritualism. At a wilderness retreat in Ohio, men seek a cure for toxic masculinity, while in the hinterlands of Wisconsin, antiwar veterans turn to farming when they cannot sustain the heroic myth of service. And when his best friend’s body washes up on the shores of the Mississippi River, he falls into the gullet of true crime discussion boards, exploring the stamina of conspiracy theories along the cankered byways of the Midwest.

In this exhilarating debut, Barrett Swanson introduces us to a new reality. At a moment when grand unifying narratives have splintered into competing storylines, these critically acclaimed essays document the many routes by which people are struggling to find stability in the aftermath of our country’s political and economic collapse, sometimes at dire and disillusioning costs. 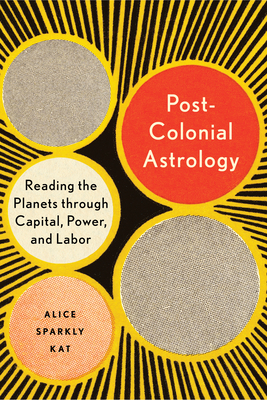 Tapping into the political power of magic and astrology for social, community, and personal transformation.

In a cross-cultural approach to understanding astrology as a magical language, Alice Sparkly Kat unmasks the political power of astrology, showing how it can be channeled as a force for collective healing and liberation.

Too often, magic and astrology are divorced from their potency and cultural contexts: co-opted by neoliberalism, used as a force of oppression, or distilled beyond recognition into applications that belie their individual and collective power. By looking at the symbolic and etymological histories of the sun, moon, Saturn, Venus, Mercury, Mars, and Jupiter, we can trace and understand the politics of magic–and challenge our own practices, interrogate our truths, and reshape our institutions to build better frameworks for communities of care.

Fearless, radical, and fresh, Sparkly Kat’s Postcolonial Astrology ushers in a new wave of astrology revival, refusing to apologize for its magickism and connecting its power to the spirituality and politics we need now. Intersectional, inclusive, and geared towards queer and POC communities, it uses our historical and collective constructs of the planets, sun, and moon to re-chart our subconscious history, redefine the body in the world, and assert our politics of the personal, in astrology and all things.

Hamnet: A Novel by Maggie O’Farrell

Attrib. and Other Stories by Eley Williams

Boys of Alabama: A Novel by Genevieve Hudson