The last few months have been a whirlwind for us all, and we haven’t been able to see any of you in person to share our favorite new releases! For those middle grade readers, aged 8-12, a lot of great books have released this year that we think you won’t want to miss. Whether you’re looking for a clever whodunit, a spooky adventure, or a heartfelt quest for truth, I’ll be sharing some of my favorite books from the year so far that might just hit the spot! Today we’re kicking off the series with round one: Following the Clues!

Not seeing what you’re looking for here? We have BookKids specialists at the ready with recommendations. Just email us at bookkids@bookpeople.com and we’re happy to send over some personalized ideas for what you or your young reader might want to read next!

Recommended for ages 7 and up

Rory Branagan endeavors to discover the truth behind his father’s mysterious disappearance in this heavily illustrated, hijinks-filled whodunit. Be warned: This is not one of those stories where the truth turns out to be a lot more ordinary than you think. Between a neighbor / sidekick with possible superpowers, an Olympic Stadium for guinea pigs, lethal octopuses, and a nefarious, gangster-led conspiracy hiding in plain sight, this kooky new series offers oodles of silly, outrageous fun!

Recommended for ages 8 and up

Who needs Nancy Drew when Goldie Vance is on the case? Goldie notices everything and never gives up, which are key skills in an aspiring hotel detective. (Of course, she’s not so great at keeping secrets, which is less of an asset.) So, when Hollywood’s leading lady comes to town with her latest production, Goldie’s determined not to miss one second of the action. That means that when a priceless diamond bathing cap goes missing from the set, Goldie’s perfectly positioned to take up the investigation in this charming series opener that sparkles with Hollywood glamour.

Recommended for ages 10 and up

Frankie doesn’t think like everyone else, and that’s just the way it is. She’s obsessed with tornadoes; she doesn’t like to be touched; she doesn’t always pay attention to what people want her to; and she doesn’t want to be ruled by her meds. But she knows that the police aren’t connecting all the dots in the disappearance of her former best friend—and she suspects she and her twin sister Tess might be the only ones who can. While sudden disappearances don’t necessarily have happy endings and usually mean something has gone wrong (in real life or in fiction), Frankie’s quest for the truth offers a relatable portrait of a middle schooler learning to trust her instincts–as well as a compelling new voice to get to know!

Recommended for ages 7 and up

Rex Dexter can talk to dead animals. Yep, just the dead ones. All he’s ever wanted was a real LIVE pet dog to play with, but his patented combo of bitter sarcasm and parental guilt only ever resulted in a pet chicken (and no, forcing a chicken to walk on a leash isn’t as much fun as it sounds). But when he finds a creepy old arcade game called The Reapers Curse, Rex’s fate is sealed, and it’s all DEAD pets all the time from there on out. These surprisingly chatty phantoms insist that Rex investigate a spate of suspicious zoo deaths in this off-the-wall mystery filled with ridiculously macabre jokes and lots and lots and lots of laughs. 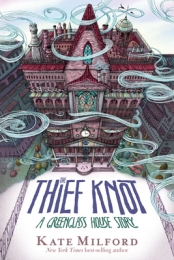 Recommended for ages 10 and up

Don’t miss the latest in the staff favorite Greenglass House Mystery series in which a “knot” of brave kids band together to solve a local kidnapping. Replete with a code breaker, a magician, a camouflage expert, an aspiring spy, and a ghost, this team is ready to crack any case. You don’t have to have read any of the other Greenglass House books to join this quest, but if you haven’t read any of the books in this series, you’re definitely missing out!

Curious about the origin of the title? Learn to tie your own thief knot at home — and catch your siblings red handed: https://www.101knots.com/thief-knot.html

Stay tuned for Round 2 of our mid-year round-up!

2 thoughts on “BookKids: Great Books You May Have Missed! Round 1”