Turns out there is, in fact, one new release Tuesday left in June, and it’s a doozy. Not only do we get the first new book from Kevin Kwan since wrapping up his Crazy Rich Asians trilogy, but we’re thrilled to share with you the conclusion of S. A. Chakraborty’s Daevabad Trilogy, a thrilling Riley Sager caper, and gorgeous new books by some up-and-comers. Read up on them below!

Sex and Vanity by Kevin Kwan

The iconic author of the bestselling phenomenon Crazy Rich Asians returns with the glittering tale of a young woman who finds herself torn between two men: the WASPY fiancé of her family’s dreams and George Zao, the man she is desperately trying to avoid falling in love with.

On her very first morning on the jewel-like island of Capri, Lucie Churchill sets eyes on George Zao and she instantly can’t stand him. She can’t stand it when he gallantly offers to trade hotel rooms with her so that she can have a view of the Tyrrhenian Sea, she can’t stand that he knows more about Casa Malaparte than she does, and she really can’t stand it when he kisses her in the darkness of the ancient ruins of a Roman villa and they are caught by her snobbish, disapproving cousin Charlotte. “Your mother is Chinese so it’s no surprise you’d be attracted to someone like him,” Charlotte teases. The daughter of an American-born Chinese mother and a blue-blooded New York father, Lucie has always sublimated the Asian side of herself in favor of the white side, and she adamantly denies having feelings for George. But several years later, when George unexpectedly appears in East Hampton, where Lucie is weekending with her new fiancé, Lucie finds herself drawn to George again. Soon, Lucie is spinning a web of deceit that involves her family, her fiancé, the co-op board of her Fifth Avenue apartment building, and ultimately herself as she tries mightily to deny George entry into her world—and her heart. Moving between summer playgrounds of privilege, peppered with decadent food and extravagant fashion, Sex and Vanity is a truly modern love story, a daring homage to A Room with a View, and a brilliantly funny comedy of manners set between two cultures.

Empire of Gold by S. A. Chakraborty

The final chapter in the bestselling, critically acclaimed Daevabad Trilogy, in which a con-woman and an idealistic djinn prince join forces to save a magical kingdom from a devastating civil war.

After a brutal conquest stripped the city of its magic, Nahid leader Banu Manizheh and her resurrected commander, Dara, must try to repair their fraying alliance and stabilize a fractious, warring people.

But the bloodletting and loss of his beloved Nahri have unleashed the worst demons of Dara’s dark past. To vanquish them, he must face some ugly truths about his history and put himself at the mercy of those he once considered enemies.

Having narrowly escaped their murderous families and Daevabad’s deadly politics, Nahri and Ali, now safe in Cairo, face difficult choices of their own. While Nahri finds peace in the old rhythms and familiar comforts of her human home, she is haunted by the knowledge that the loved ones she left behind and the people who considered her a savior are at the mercy of a new tyrant. Ali, too, cannot help but look back, and is determined to return to rescue his city and the family that remains. Seeking support in his mother’s homeland, he discovers that his connection to the marid goes far deeper than expected and threatens not only his relationship with Nahri, but his very faith.

As peace grows more elusive and old players return, Nahri, Ali, and Dara come to understand that in order to remake the world, they may need to fight those they once loved . . . and take a stand for those they once hurt.

From the author of Gods of Jade and Shadow comes a reimagining of the classic gothic suspense novel, a story about an isolated mansion in 1950s Mexico—and the brave socialite drawn to its treacherous secrets.

He is trying to poison me. You must come for me, Noemí. You have to save me.

After receiving a frantic letter from her newly-wed cousin begging for someone to save her from a mysterious doom, Noemí Taboada heads to High Place, a distant house in the Mexican countryside. She’s not sure what she will find—her cousin’s husband, a handsome Englishman, is a stranger, and Noemí knows little about the region.

Noemí is also an unlikely rescuer: She’s a glamorous debutante, and her chic gowns and perfect red lipstick are more suited for cocktail parties than amateur sleuthing. But she’s also tough and smart, with an indomitable will, and she is not afraid: Not of her cousin’s new husband, who is both menacing and alluring; not of his father, the ancient patriarch who seems to be fascinated by Noemí; and not even of the house itself, which begins to invade Noemi’s dreams with visions of blood and doom.

Her only ally in this inhospitable abode is the family’s youngest son. Shy and gentle, he seems to want to help Noemí, but might also be hiding dark knowledge of his family’s past. For there are many secrets behind the walls of High Place. The family’s once colossal wealth and faded mining empire kept them from prying eyes, but as Noemí digs deeper she unearths stories of violence and madness.

And Noemí, mesmerized by the terrifying yet seductive world of High Place, may soon find it impossible to ever leave this enigmatic house behind.

Begin Again: James Baldwin’s America and Its Urgent Lessons for Our Own by Eddie S. Glaude, Jr.

James Baldwin grew disillusioned by the failure of the Civil Rights movement to force America to confront its lies about race. In the era of Trump, what can we learn from his struggle?

“Not everything is lost. Responsibility cannot be lost, it can only be abdicated. If one refuses abdication, one begins again.”—James Baldwin

We live, according to Eddie S. Glaude, Jr., in the after times, when the promise of Black Lives Matter and the attempt to achieve a new America were challenged by the election of Donald Trump, a racist president whose victory represents yet another failure of America to face the lies it tells itself about race.

We have been here before: For James Baldwin, the after times came in the wake of the Civil Rights movement, when a similar attempt to compel a national confrontation with the truth was answered with the murders of Medgar Evers, Malcolm X, and Martin Luther King, Jr. In these years, spanning from the publication of The Fire Next Time in 1963 to that of No Name in the Street in 1972, Baldwin was transformed into a more overtly political writer, a change that came at great professional and personal cost. But from that journey, Baldwin emerged with a sense of renewed purpose about the necessity of pushing forward in the face of disillusionment and despair.

In the story of Baldwin’s crucible, Glaude suggests, we can find hope and guidance through our own after times, this Trumpian era of shattered promises and white retrenchment. Mixing biography—drawn partially from newly uncovered interviews—with history, memoir, and trenchant analysis of our current moment, Begin Again is Glaude’s attempt, following Baldwin, to bear witness to the difficult truth of race in America today. It is at once a searing exploration that lays bare the tangled web of race, trauma, and memory, and a powerful interrogation of what we all must ask of ourselves in order to call forth a new America. 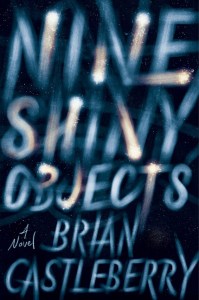 A stunning literary saga in the tradition of Don DeLillo and Jennifer Egan—a luminous debut novel chronicling the unexpectedly, eerily intersecting lives of a line of dreamers over the course of half a century that reveals the divided heart of modern America itself.

June 26, 1947. Headlines across America report that an aviator from Idaho witnessed nine pulsating lights flying over the Cascade Mountains at speeds surpassing any aircraft built by humankind. Days later, a desperate Chicago pool hustler, inspired by the news, hitchhikes west in a fever-dream search for a possible extraterrestrial sign. From those he inspires along the way to the Cascades comes a new community—“The Seekers”—devoted to creating a society where divisions of race, ethnicity, and sexuality are a thing of the past.

Believing that utopia will begin in a community of their own creation, The Seekers attempt to settle in the suburbs of Long Island. One night, a stranger arrives and a horrific crime ensues. In the decades that follow, the perpetrators, survivors, and their children will be forced to face the consequences of what happened.

Like an eroding Atlantic seashore, a Cascade mountain snowflake, and the branching crimson streaks in bloodshot eyes, Nine Shiny Objects is a fractal: a novel of intimate reveries that replicates to form a larger portrait of America’s cleaved soul—the perpetual clash between the optimism of those who seek inspiration from spacious skies and the venom of others who relish the underworld—not only via conspiratorial maneuverings, but the literal unearthing of the dead.

Home Before Dark by Riley Sager

In the latest thriller from New York Times bestseller Riley Sager, a woman returns to the house made famous by her father’s bestselling horror memoir. Is the place really haunted by evil forces, as her father claimed? Or are there more earthbound—and dangerous—secrets hidden within its walls?

Maggie Holt is used to such questions. Twenty-five years ago, she and her parents, Ewan and Jess, moved into Baneberry Hall, a rambling Victorian estate in the Vermont woods. They spent three weeks there before fleeing in the dead of night, an ordeal Ewan later recounted in a nonfiction book called House of Horrors. His tale of ghostly happenings and encounters with malevolent spirits became a worldwide phenomenon, rivaling The Amityville Horror in popularity—and skepticism.

Today, Maggie is a restorer of old homes and too young to remember any of the events mentioned in her father’s book. But she also doesn’t believe a word of it. Ghosts, after all, don’t exist. When Maggie inherits Baneberry Hall after her father’s death, she returns to renovate the place to prepare it for sale. But her homecoming is anything but warm. People from the past, chronicled in House of Horrors, lurk in the shadows. And locals aren’t thrilled that their small town has been made infamous thanks to Maggie’s father. Even more unnerving is Baneberry Hall itself—a place filled with relics from another era that hint at a history of dark deeds. As Maggie experiences strange occurrences straight out of her father’s book, she starts to believe that what he wrote was more fact than fiction.

Alternating between Maggie’s uneasy homecoming and chapters from her father’s book, Home Before Dark is the story of a house with long-buried secrets and a woman’s quest to uncover them—even if the truth is far more terrifying than any haunting. 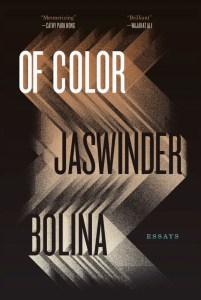 Of Color by Jaswinder Bolina

In his debut essay collection, award-winning poet Jaswinder Bolina meditates on “how race,” as he puts it, “becomes metaphysical”: the cumulative toll of the microaggressions and macro-pressures lurking in the academic market, on the literary circuit, in the dating pool, and on the sidewalks of any given U.S. city. Training a keenly thoughtful lens on questions that are never fully abstract-about immigration and assimilation and class, about the political utility of art, about what it means to belong to a language and a nation that brand you as other-OF COLOR is a bold, expansive, and finally optimistic diagnosis of present-day America.

These titles and more are available to order from BookPeople today.