ICYMI, bookseller and poet Elijah took over our Instagram for the month of April sharing a poem every day! You can still check out his readings on our IG Highlights. Today he’s here to share his expertise on 5 foreign language poets you should get to know… check ’em out!

Tu Fu, the most accomplished and critically acclaimed poet of the Tang dynasty, occupies a pride of place in East Asian letters comparable to Shakespeare in English— his influence in China and Japan is omnipresent, his words and thoughts forever engrained in the psyches of those civilizations and their subsequent poets. Though Li Po, another Tang poet of almost equal renown, is the more popular poet in the West (his emotional, exuberant worldview aligns more neatly with our still romantic age), Tu Fu’s moral seriousness, emotional maturity, and breathtaking mastery of form are permanently desirable qualities of verse, and it is he whom we should look to as the paragon of Chinese poetic art. Tu Fu’s relative lack of recognition in the West (as compared to his veneration in the East) can partially be attributed to the difficulty in conveying his brilliance—Like Dante, Goethe, and Mallarmé, his poetry is formally intricate and linguistically subtle, and a great deal is lost in translating his works. However, the reader who is willing to not only submerge in the poems but consult scholarly commentary will be richly rewarded with poignant and sophisticated meditations on nature, loss, social issues, and moral responsibility.

“…brimming with existential implication, psychological insight, and nostalgic feeling, bring a stirring sense of humanity to the past, and show the universality of human experience across the ages.”

Constantine Cavafy was, along with George Seferis and Odysseus Elytis, one of the three major Greek poets of the 20th century, and among them, he was the first and greatest.

Though a proud Hellene and master of the Greek language, Cavafy was in fact born in Alexandria, and later lived in Constantinople. Partly as a result of this personal history, he felt a great fascination for Hellenistic Greece, and many of his poems therefore draw not only from Ancient Greek lore, but from Ptolemaic figures and history for their subject matter. These historical poems, brimming with existential implication, psychological insight, and nostalgic feeling, bring a stirring sense of humanity to the past, and show the universality of human experience across the ages. Yet Cavafy was also a deeply personal poet, and his many lyrics dealing with his own homosexual desire and experience were revolutionary for their time—to this day, along with figures like Thom Gunn, James Merrill, and J.D. McClatchy, he remains one of the finest chroniclers of gay love in poetry.

Start with: “Waiting for the Barbarians,” “Ithaca” – Order here!

“…against this despair, he argues for a fatalistic spiritual fortitude and stoic embrace of nature, an attitude which at its heights verges on the sublime and heroic.”

There is perhaps no poet in history as unrelentingly melancholy as Giacomo Leopardi— nowhere is the utter futility of life laid out with such simultaneous precision and beauty as in his work, and it would perhaps not be too much of a stretch to call him the first modern nihilist. Though he will never be to everyone’s taste, he is undoubtedly one of the greatest poets of the 19th century, and in Italy is considered second only to Dante himself. Leopardi was in some ways a philosopher first (his sprawling collection of philosophical notes, The Zibaldone, had a profound effect on the pessimistic position of Schopenhauer), and he wrote poetry primarily in order to better articulate his existential positions and his feelings regarding them. Radical for his time, he argued that human consciousness, because of its impossible longing for the infinite and inability to sustain meaning, is doomed to permanent unhappiness. Yet against this despair, he argues for a fatalistic spiritual fortitude and stoic embrace of nature, an attitude which at its heights verges on the sublime and heroic. Leopardi’s vast intelligence, classical eloquence, and deep compassion for his fellow sufferers ensure that we find his entreaties convincing.

“…for a seeking soul new to poetry, his voice can be like a thunderbolt from the heavens.”

There is less need to panegyrize on Rilke’s behalf than for the others on this list. He is already immensely popular in the Anglophone world, and understandably so— his dark

romanticism and ecstatic spirituality cry out from the page, even in translation, sending his readers into raptures of cosmic longing and imagination; one might say that he’s the mystical poet one turns to if one finds Rumi, Hafez, and Gibran too didactic, naïve, or lighthearted. As a fledgling poet, I idolized Rilke— his words seemed like incantations, and given my preoccupations at the time, he seemed like the ideal model to draw inspiration from. As my aesthetic philosophy has shifted, I’ve since grown more ambivalent about his work, but there will never be any question that he writes more eloquently about existential angst than almost anyone in any language— and for a seeking soul new to poetry, his voice can be like a thunderbolt from the heavens. If you want to fall in love with poetry, and see the possibilities of expression taken to their gorgeous limits, you won’t want to miss this Austrian genius.

Start with: The Duino Elegies, The Sonnets to Orpheus – Order here!

I’ve saved Paul Valéry for last for a couple of reasons: for one, he is one of the best kept secrets of world literature: sometimes considered the best French poet of all time (no mean feat! see also: Baudelaire, Racine) on the strength of fewer than a hundred poems ever published, he has, except amongst a knowing few, virtually no audience in the English-speaking world. This might be explained by the second reason I’ve saved him for last: of all the poets on this list, Valéry is the most sophisticated, and the least accessible. Whereas it’s sometimes difficult to follow what Rilke is saying, it’s easy to allow oneself to be swept along by his emotion and sensuous language, and one gets the impression that Rilke’s thoughts, while often brilliant, are wandering and associative, and therefore the exact meaning of what he says at any given time is less important than what he has to express in general. One cannot skim Valéry in this way— his language is just as sensuous and powerful as Rilke’s, but nearly every word is painstaking chosen, and saturated with symbolic meaning. 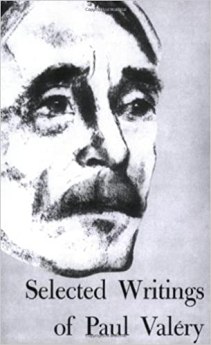 Valéry was a man who lived almost constantly inside his own head— like Leopardi, he is as famous for the copious philosophical notes he left behind (The Cahiers) as for his poetry— and was constantly preoccupied with metaphysical, phenomenological, and scientific questions, not only in his poetry but in his aforementioned notes, critical writings, journalism, and letters. His many admirers and correspondents included quantum theorist Louis de Broglie, philosopher Henri Bergson, and Albert Einstein himself. Another admirer, the literary critic whom I consider the greatest this side of Samuel Johnson, Yvor Winters, claimed that Valéry pioneered a “Post-Symbolist” method: a way of writing poetry that unites perception and conception seamlessly, wherein every detail described in a poem makes sense on the level of physical narrative, yet also has a clearly articulated symbolic subtext. Not only this, but in such a poem the details and the ideas they represent elucidate each other, and therefore the method results in an unequalled power of expression. If one accepts that Valéry practiced this sort of sophisticated allegory in his poetry (and there is good reason to do so), it will become apparent why he must be read extremely closely. The reader who does so however will be richly rewarded, for Valéry’s work triumphs in conveying complex existential insight tinged with an aura of beauty and majesty— What more could one ask of a poet? A substantial influence on two of the greatest American poets of the 20th century, Wallace Stevens and Edgar Bowers, Valéry remains a valuable resource for the contemporary poet, and a treasure for the poetry connoisseur.

Starting points: Valéry wrote the two poems that Winters considered to be the greatest of all time, in any language: Le Cimetière Marin (The Graveyard By the Sea), and Ébauche d’un Serpent (Sketch of a Serpent). The former is Valéry’s most famous work, and can be easily found in a multitude of translations— the second is more obscure, and the extant translations leave much to be desired. I myself am currently working on a translation of Ébauche d’un Serpent, so perhaps you’ll see it published someday! The poem which made Valéry’s name in France is his long work, La Jeune Parque (The Youngest of the Fates), and this poem, while long and somewhat obscure, is worth seeking out as well. For more accessible fare, turn to his prose poems, such as the exquisite “The Young Mother” and “The Bath.” – Order here!

One thought on “5 Foreign Language Poets to Add to Your Bookshelves!”