Fall in love with a good book this week! Whether you’re looking for a last minute gift for your bookish crush or are just looking to treat yo’ self, we’ve got a handy list of selections right here that’ll send your reading heart a-flutter!

The bestselling author of Dept. of Speculation, Jenny Offill, returns to fiction with a hilarious and shimmering tour de force about a family, and a nation, in crisis.

Enter Lizzie Benson: librarian, mother, wife, sister, daughter and fake shrink. For years she has tended to her God-haunted mother and her recovering addict brother. They have both stabilized for the moment, but Lizzie has little chance to spend her new free time with husband and son before her old mentor, Sylvia Liller, makes a proposal.

She’s become famous for her prescient podcast, Hell and High Water, and wants to hire Lizzie to answer the mail she receives: from left-wingers worried about climate change and right-wingers worried about the decline of western civilization. As Lizzie dives into this polarized world, she begins to wonder what it means to keep tending your own garden once you’ve seen the flames beyond its walls. When her brother becomes a father and Sylvia a recluse, Lizzie is forced to address the limits of her own experience—but still she tries to save everyone, using everything she’s learned about empathy and despair, conscience and collusion, from her years of wandering the library stacks.

Events & Marketing Manager, Cristina L., has raved about Weather, saying, this novel “takes a hard look at our hidden fears and dreams, and it does it through a fine thread of funny, snarky, and intelligent prose…[it] works as a perfect mirror of our times.”

Jump on this book that has our staff excited and was recently featured as the front page feature of The New York Times Book Review! 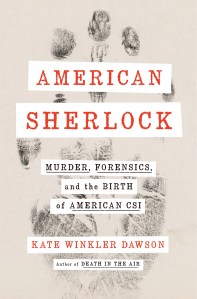 Berkeley, California, 1933. In a lab filled with curiosities—beakers, microscopes, Bunsen burners, and hundreds upon hundreds of books—sat an investigator who would go on to crack at least two thousand cases in his forty-year career. Known as the “American Sherlock Holmes,” Edward Oscar Heinrich was one of America’s greatest—and first—forensic scientists, with an uncanny knack for finding clues, establishing evidence, and deducing answers with a skill that seemed almost supernatural. In this new book by the acclaimed author of Death in the Air, an oft-unheard history of one of the great pioneers of forensic science is finally brought to light!

Heinrich was one of the nation’s first expert witnesses, working in a time when the turmoil of Prohibition led to sensationalized crime reporting and only a small, systematic study of evidence. Nevertheless, Heinrich spearheaded the invention of a myriad of new forensic tools that police still use today, including blood spatter analysis, ballistics, lie-detector tests, and the use of fingerprints as courtroom evidence. His work, though not without its serious—some would say fatal—flaws, changed the course of American criminal investigation.

Based on years of research and thousands of never-before-published primary source materials, American Sherlock captures the life of the man who pioneered the science our legal system now relies upon—as well as the limits of those techniques and the very human experts who wield them.

Our booksellers describe American Sherlock as “a thoroughly researched book… [perfect] for fans of true crime” (Robyn) and “eloquent…[American Sherlock] will have you thinking about forensics and crime in a new and enlightening way.” (Allie)

And if that isn’t enough to get you jazzed, Kate Winkler Dawson’s stopping by BookPeople this Saturday, February 15th at 5PM to discuss American Sherlock alongside Becka Oliver of the Writers’ League of Texas, with a signing to follow! We’ll see you there!

The Illness Lesson by Clare Beams

Incoming — a bookseller favorite! With The Illness Lesson, Clare Beams presents a searing novel which probes the world’s approach to women’s bodies and women’s minds, and the time-honored tradition of doubting both.

At their newly founded school, Samuel Hood and his daughter Caroline promise a groundbreaking education for young women. But Caroline has grave misgivings. After all, her own unconventional education has left her unmarriageable and isolated, unsuited to the narrow roles afforded women in 19th century New England.

When a mysterious flock of red birds descends on the town, Caroline alone seems to find them unsettling. But it’s not long before the assembled students begin to manifest bizarre symptoms: Rashes, seizures, headaches, verbal tics, night wanderings. One by one, they sicken. Fearing ruin for the school, Samuel overrules Caroline’s pleas to inform the girls’ parents and turns instead to a noted physician, a man whose sinister ministrations—based on a shocking historic treatment—horrify Caroline. With no choice left, Caroline will have to defy every rule that has governed her life, her mind, her body, and her world.

Precisely observed, hauntingly atmospheric, as fiercely defiant as it is triumphant, The Illness Lesson is a spellbinding piece of storytelling, one that bookseller Olivia Z. called “unapologetic and empowering…a stirring song whose verses…cannot be forgotten.”

The Mercies by Kiran Millwood Hargrave

Finnmark, Norway, 1617. Twenty-year-old Maren Magnusdatter stands on the craggy coast, watching the sea break into a sudden and reckless storm. Forty fishermen, including her brother and father, are drowned and left broken on the rocks below. With the menfolk wiped out, the women of the tiny Arctic town of Vardø must fend for themselves.
Three years later, a stranger arrives on their shore. Absalom Cornet comes from Scotland, where he burned witches in the northern isles. He brings with him his young Norwegian wife, Ursa, who is both heady with her husband’s authority and terrified by it. In Vardø, and in Maren, Ursa sees something she has never seen before: independent women. But Absalom sees only a place untouched by God, and flooded with a mighty evil. As Maren and Ursa are drawn to one another in ways that surprise them both, the island begins to close in on them, with Absalom’s iron rule threatening Vardø’s very existence.
Inspired by the real events of the Vardø storm and the 1621 witch trials, The Mercies is a story of love, evil, and obsession, set at the edge of civilization. Get this enthralling read today!

The Burn by Kathleen Kent

Kathleen Kent, known for historical novels, proved her ability to cross genres with The Dime. The gritty police thriller, featuring Betty Rhyzyk, a New York narcotics detective who transfers to Dallas to be with her wife, breathed new life into the cop novel and won her praise from the likes of Joe R. Lansdale. Luckily Kathleen and Betty are back for The Burn.
It’s not too long into the book, Betty’s head-first attitude lands her into desk duty. It and other things are not helping the relationship with Jackie. Her frustrations grow when word on the street  hits that several kilos of The Sinola Cartel’s heroine got stolen and confidential informants are popping up dead in the sleazier parts of The Big D. Her colleagues leave her behind as they look for El Cuchillo (or The Knife), a Sinola enforcer with a nasty reputation believed to be behind the killings. When Betty gets information that some of the players could be involved with the department and with Jackie, she jumps out from behind the desk and goes rogue.
Kent builds an exciting world of The Dallas Narcotics division and the Texas toned underworld they operate in. She shows camaraderie between the police with undercurrents of infighting, often disguised as joking around.The cheap motels and dive bars where Betty hunts down answers are gritty and hard, either bathed in shadows or reflecting the glare of the Lone Star sun, everything and everybody plays with perception.
All of this fits into Betty’s point of view.. She charges in, not always looking and a situation with few people to trust leads to some justified paranoia. Since there are very few she can trust, she turns to outsiders, recruiting a pregnant dealer’s girlfriend and Jackie’s Vietnam vet uncle, James Earle, into her cause.
The Burn proves to be even better than The Dime. The plotting is well crafted with strong action passages and a believable, dangerous setting with characters who pop. At the center of it all is a complex heroine who couldn’t give a rat’s ass if you like her or not. Here’s hoping Betty can always get out from behind the desk.
Reserve your copy today! 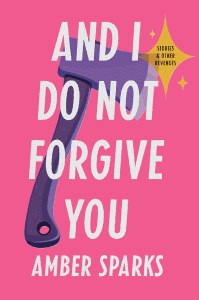 And I Do Not Forgive You by Amber Sparks

Boldly blending fables and myths with apocalyptic technologies, Amber Sparks holds a singular role in the canon of the weird. Having garnered acclaim for her shimmering collection The Unfinished World, she reaches uncanny heights with And I Do Not Forgive You. In prose that beats with urgency, these contemporary stories read like the best of fairytales—which are, as Sparks writes, just a warning disguised as a wish.

In “Mildly Happy, With Moments of Joy,” a friend is ghosted by a simple text message; in “Everyone’s a Winner at Meadow Park,” a teen precariously coming of age in a trailer park befriends an actual ghost. Indeed, the depths of friendship are examined under the most trying circumstances.

Humorous and unapologetically fierce, other stories shine an interrogating light on the adage that “history likes to lie about women”? as the subjects of “You Won’t Believe What Really Happened to the Sabine Women” (it’s true, you won’t) will attest. Sparks employs her vast knowledge of the morbid and macabre in “The Eyes of Saint Lucy,” in which a young girl creates elaborately violent dioramas of famous saints with her mother. And in “A Short and Speculative History of Lavoisier’s Wife,” the great efforts of French chemist Lavoisier’s widow to ensure his legacy are chillingly revealed.

Taken together, this hypnotic and otherworldly collection seeks to reclaim the lives of the silenced. And what is history, Sparks asks, but the chance to dig up our skeletons and give them new stories? Humorous and unapologetically fierce, And I Do Not Forgive You offers a mosaic of an all-too-real world that too often fails to listen to its goddesses.

In “a strangely ageless world somewhere between Emily Dickinson and David Lynch” (Blake Butler), a cleaning woman at a museum of art nurtures aspirations to do more than simply dust the paintings that surround her. She dreams of having the liberty to explore them in writing, and so must find a way to win herself the security and time to use her mind. She escapes her lot by marrying a rich man sympathetic to her “hobby,” but having gained a husband, a house, high society, and a maid, she finds that her new life of privilege is no less constrained. Not only has she taken up different forms of time-consuming labor—social and erotic—but she is now, however passively, forcing other women to clean up after her. Perhaps a more drastic solution is necessary?

Reminiscent of a lost Victorian classic in miniature, yet taking equal inspiration from such modern authors as Jean Rhys, Octavia Butler, Clarice Lispector, and Jean Genet, Amina Cain’s Indelicacy is at once a ghost story without a ghost, a fable without a moral, and a down-to-earth investigation of the barriers faced by women in both life and literature. It is a novel about seeing, class, desire, anxiety, pleasure, friendship, and the battle to find one’s true calling. And though it is a slim volume, this one packs a mighty punch. Get yours today!

Check out these titles and the rest of this week’s new releases when you visit us in-store, and shop them with us online 24/7.