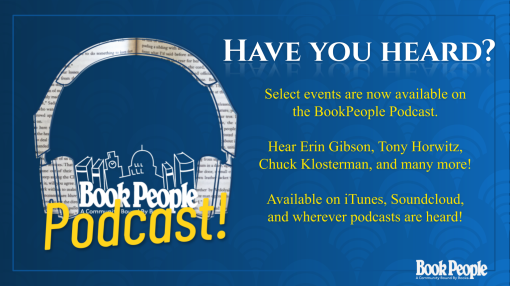 We’re turning back the clock again, diving into the archives of the BookPeople podcast to showcase another one of our favorite events we hosted in-store this year. Author Jasper Fforde stopped by BookPeople to read from and sign Early Riser, his first standalone novel since 2009. Listen in as Jasper Fforde discusses his latest that bookseller Christine H. describes as “brilliant and refreshing.” 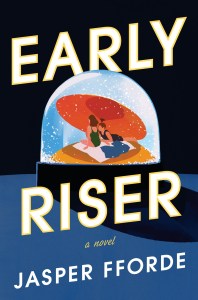 Every Winter, the human population hibernates.
During those bitterly cold four months, the nation is a snow-draped landscape of desolate loneliness, devoid of human activity.

Well, not quite.
Your name is Charlie Worthing and it’s your first season with the Winter Consuls, the committed but mildly unhinged group of misfits who are responsible for ensuring the hibernatory safe passage of the sleeping masses.
You are investigating an outbreak of viral dreams which you dismiss as nonsense; nothing more than a quirky artefact born of the sleeping mind.

When the dreams start to kill people, it’s unsettling.

When you get the dreams too, it’s weird.

When they start to come true, you begin to doubt your sanity.

But teasing truth from the Winter is never easy: You have to avoid the Villains and their penchant for murder, kidnapping and stamp collecting; ensure you aren’t eaten by Nightwalkers, whose thirst for human flesh can only be satisfied by comfort food; and sidestep the increasingly less-than-mythical WinterVolk.

But so long as you remember to wrap up warmly, you’ll be fine.

Enjoy this episode and more of our event programming on the BookPeople Podcast.

Jasper Fforde gave up his career in the film industry when his novel The Eyre Affair debuted on The New York Times bestseller list in 2002. He is the author of the Thursday Next series, the Nursery Crimes series, and Shades of Grey. He lives and works in Wales.