We’re waving the summer goodbye here at BookPeople, but the new releases won’t stop coming and for that, we’re thankful! Here’s some exciting new titles, a few of which we’ll be having events for later this month and the next.

The Girl Who Lived Twice by David Lagercrantz

The sixth installment of the Millenium Series is here! The crime fiction phenomenon that has sold more than 90 million copies worldwide and has yielded several movie adaptations is heating up in David Lagercrantz’s The Girl Who Lived Twice. In it, Lisbeth Salander has gone missing without a trace, but what no one knows is that at long last she’s got her primal enemy, her twin sister, Camilla, squarely in her sights.

But Mikael Blomkvist is trying to reach Lisbeth. He needs her help unraveling the identity of a man who lived and died on the streets in Stockholm—a man who does not exist in any official records and whose garbled last words hinted at possible damaging knowledge of people in the highest echelons of government and industry.

Once again, Salander and Blomkvist must come to each other’s aid, and for Lisbeth this may be the most important battle of her life — the one to finally put her past to rest. Join us on August 30th at 7PM when we host David Lagercrantz in what is sure to be an enthralling conversation between the author and local mystery superstar Chandler Baker!

Trans+ is an all-inclusive, uncensored guide for teens who are transgender, nonbinary, gender-nonconforming, or gender-fluid. Trans+ answers all your questions, easy and hard, about gender and covers mental health, physical health and reproduction, transitioning, relationships, sex, and life as a trans or nonbinary individual. It’s full of essential information you need — and want — to know and includes real-life stories from trans individuals!

We’re delighted to be hosting authors Kathryn Gonzales and Karen Rayne, who will be joined by Out Youth, for a discussion on these topics on September 8th at 2PM!

The Missing Ones by Edwin Hill

Edwin Hill continues his Hester Thursby series with The Missing Ones. In it, Thursby is summoned to Finisterre Island off the coast of Maine by a cryptic text to help find a boy gone missing — the latest in a string of disappearances — and solve a murder in the wake of a devastating storm.

But when Hester begins to connect the dots between the crime and the missing children, she uncovers the secrets at the center of the small community, finding grudges and loyalties that run deep; encounters that will shake her convictions about the very nature of right and wrong. Be sure to join us on September 9th at 7PM when Edwin Hill joins MysteryPeople Coordinator Scott Montgomery for a discussion with Puja Guha and Carl Vonderau on range in the mystery genre.

Best Friends is the highly anticipated follow-up to the runaway hit graphic memoir Real Friends. In this one, young Shannon enters sixth grade thinking she has it all figured out, except she doesn’t and soon figures out that friends and boys and navigating social life in middle school is tough.

Eugenia, our Director of BookKids Events & Marketing and Hale/Pham super-fan has this to say: ” Best Friends is a fantastic follow-up to Real Friends, focusing on the struggles that come with young Shannon entering middle school, from learning how girls are “supposed” to behave to dealing with boys who are friends and best friends who are really frenemies. Shannon also gives us insight to her daily worries about parents dying, saying the wrong thing and sounding dumb, her house catching fire– all illustrated masterfully by Pham, this acts as a great conversation starter about anxiety and stress. Best Friends will delight, charm, and enlighten you!”

But get this: Shannon Hale and LeUyen Pham will be stopping by BookPeople on September 15th and 2PM to talk about and sign this wonderfully-illustrated, gorgeously-told story. Won’t you join us??

Anna Dewdney’s Llama Llama is growing up, but he still loves to play with all his toys! When Mama Llama says it’s time to clean up, Llama responds like any child more interested in playing than cleaning…by ignoring her! But Mama has an imaginative response of her own. What if she never cleaned? What would happen then? Well, Llama Llama is going to find out! Here is a truly funny take on a childhood chore that all children will relate to and laugh at! And it is sure to be helpful to get kids cleaning up!

If you and your kids are fans of Llama Llama you’ll want to do yourself a favor and mark your calendars — Llama Llama himself will be stopping by September 4th at 10:30AM for a very special storytime where we’ll be reading aloud this brand new title! 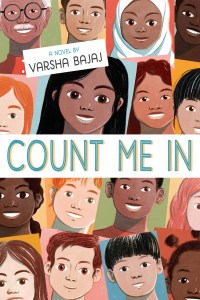 Count Me In by Varsha Bajaj

Texas-based author Varsha Bajaj has a brand new middle grade novel out! Count Me In is an uplifting story, told through the alternating voices of two middle-schoolers rallying a community to reject racism.

Karina Chopra would have never imagined becoming friends with the boy next door—after all, they’ve avoided each other for years and she assumes Chris is just like the boys he hangs out with, who she labels a pack of hyenas. Then Karina’s grandfather starts tutoring Chris, and she discovers he’s actually a nice, funny kid. But one afternoon something unimaginable happens—the three of them are assaulted by a stranger who targets Indian-American Karina and her grandfather because of how they look. Her grandfather is gravely injured and Karina and Chris vow not to let hate win. When Karina posts a few photos related to the attack on social media, they quickly attract attention, and before long her #CountMeIn post—“What does an American look like? #immigrants #WeBelong #IamAmerican #HateHasNoHomeHere”—goes viral and a diverse population begin to add their own photos. Then, when Papa is finally on the road to recovery, Karina uses her newfound social media reach to help celebrate both his homecoming and a community coming together.

Cold Warriors is the brilliant, invigorating account of the great writers on both sides of the Iron Curtain who played the dangerous games of espionage, dissidence and subversion that changed the course of the Cold War. With a cast that includes the likes of George Orwell, Mary McCarthy, Graham Greene, Aleksandr Solzhenitsyn, John le Carré, Richard Wright, Ernest Hemingway, Boris Pasternak, Arthur Koestler, Joan Didion and scores more, Cold Warriors is a welcome reminder that, at a moment when ignorance is celebrated and reading seen as increasingly irrelevant, writers and books can change the world. 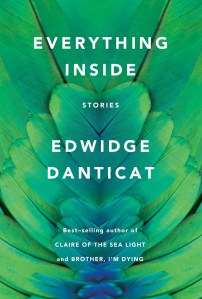 Everything Inside by Edwidge Danticat

Named a Highly Anticipated Book of Summer 2019 by Lit Hub, Esquire, The Los Angeles Times, Newsweek, BuzzFeed, TIME, Good Housekeeping, Bustle, and BookRiot, Edwige Danticat’s Everything Inside is a collection of vividly imagined stories that brims with indelible humanity. In these eight powerful, emotionally absorbing stories, romance unexpectedly sparks, a marriage ends with irreperable consequences, lovers reunite, and a child’s christening brings three generations of a family to a precarious dance between old and new. This collection showcases Danticat’s talents as a keen observer of the human heart, a master at her best.

A Better Man by Louise Penny

Crisis greets Chief Inspector Armand Gamache on his first day back as head of the homicide department in Sûreté du Québec: catastrophic spring flooding, blistering media attacks and a girl who’s gone missing. In an attempt to hold off the encroaching chaos, Gamache abandons the search for the missing girl, Vivienne Godin, but with a daughter of his own, he finds himself developing a profound, and perhaps unwise, empathy for her distraught father. As the rivers rise, and the social media onslaught against Gamache becomes crueler, a body is discovered. And in the tumult, mistakes are made. In the next novel in this “constantly surprising series that deepens and darkens as it evolves,” Gamache must face a horrific possibility, and a burning question.

Award-winning writer, comedian, actor, and director Stephen Fry stylishly re-tells the Greek Myths in Mythos. Fry breathes life into ancient tales, from Pandora’s box to Prometheus’s fire, and transforms the adventures of Zeus and the Olympians into emotionally resonant and deeply funny stories, without losing any of their original wonder. This collectible volume, complete with a textured case and full-color art throughout, is a doorway into a captivating world.

Joe Horrigan, former executive director of the Pro Football Hall of Fame, presents a sweeping and lively history of the National Football League, timed to coincide with the NFL’s 100th season. NFL Century recounts for readers the story of a scrappy upstart league that has since gone on to become one of the most popular and lucrative professional sports leagues in history. Lovers of the game should flock to get their hands on this immersive title that features a host of football icons and presents in vivid detail the controversies, scandals and glory days that have defined the league. Events Logistics Manager Uriel calls this book, “Awesome…an exhaustive and un-put-downable survery of America’s favorite game.”

Texan author Cora Carmack’s latest novel is finally here! A sequel to her fan favorite, ROAR, the story of a queen-in-training lacking the magic she’s supposed to wield, Aurora’s story continues in RAGE! With her loyalties tested, will Aurora return to the life she was destined to lead, or will she ride the storm she’s found herself in? Even the skies are pouring out their wrath in this thrilling sequel…but is it just the Rage season, or is there more behind the churning clouds? Don’t miss the next installation in a series beloved by Stephanie Garber, Kami Garcia, and Jennifer L. Armentrout! 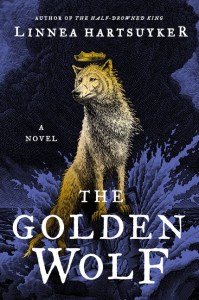 The Golden Wolf by Linnea Hartsuyker

Thrilling historical fiction that brims with true detail, Linnea Hartsuyker’s Golden Wolf Saga is a riveting Viking epic that comes highly recommended by part-time bookseller Will B.! With the final installment in Hartsuyker’s trilogy on our shelves now, it’s the perfect time to immerse yourself in this brutal and glorious ancient world, following the story of Ragnvald, his sister Svanhild, and a quest to unite Norway. Will says “I want to talk about this book with everyone but I don’t want to spoil anything as this was a breathtaking conclusion to the story! Written in such a way that you can feel the salt spray as you read the words, The Golden Wolf was an absolute joy to read. Action packed and emotional, I highly recommend this trilogy to those looking for an engrossing and truly awesome story.”

My Name is Wakawakaloch! by Chana Stiefel and Mary Sullivan

Rounding out our new releases this week is this lighthearted picture book, My Name is Wakawakaloch!

No one can pronounce Wakawakaloch’s name. Why couldn’t she be called something simple . . . like Gloop? That’s a name you can find on a T-shirt! But after a visit with her tribe’s elder, Wakawakaloch discovers what her name means, and how powerful names can be. Gloop may be easy to say, but the girl who helps her friends embrace differences and wear their names proudly? Her name is Wakawakaloch!

Come out to our storytime on September 21st at 10:30AM when illustrator Mary Sullivan joins us to read from this fun-loving book!

Make sure to tune in here every week as we give you the scoop on some of the titles we don’t want you to miss out on!