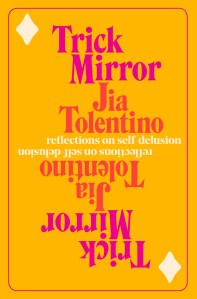 From breakout contributor at The New Yorker, Jia Tolentino, comes Trick Mirror: an essay collection that tackles the conflicts, contradictions, and sea changes that define us and our time. In nine entirely original essays, written with a rare combination of give and sharpness, wit and fearlessness, she delves into the forces that warp our vision, demonstrating an unparalleled stylistic potency and critical dexterity. Inventory Manager Molly says, “[Tolentino] writes about everything I’m interested in — scammers, reality TV, the wedding industrial complex, god as drugs as god — with technicolor prose, hyper, hyperreal, hyperintelligent. Along with being funny, whipsmart, digitally native, and a pioneering thinker, Jia is — there’s no other word for it — cool. I would read her thoughts on anything.”

Kira Jan Buxton’s debut novel, Hollow Kingdom, is a humorous, big-hearted, and boundlessly beautiful romp through the apocalypse and the world that comes after. It follows S.T., a foul-mouthed, Cheeto-loving crow who’s recently abandoned his old life to venture out into a wild and frightening new world with his trusty steed Dennis. There he discovers that the neighbors are devouring each other and the local wildlife is abuzz with rumors of dangerous new predators roaming Seattle. Humanity’s extinction has seemingly arrived, and the only one determined to save it is S.T. Our booksellers are already raving about Hollow Kingdom. Maya calls it “a wild and hilarious take on the post-apocalyptic story” and Melissa is “beyond ready to force people to read this silly story.” We’re so excited for you to finally get in on the fun!

In the Country of Women by Susan Straight

Susan Straight’s In the Country of Women is a valuable social history and a personal narrative that reads like a love song to America and indomitable women. Framed as letter to the author’s three daughters, this memoir explores and honors the daughters’ rich ancestral past through stories of female relatives struggling to overcome violence, oppression, and hardship. Kirkus Reviews has called it “moving…a radiant memoir imbued with palpable love.”

The Turn of the Key  by Ruth Ware

When Rowan Caine stumbles across the ad, she’s looking for something else completely. But it seems like too good an opportunity to miss—a live-in nannying post, with a staggeringly generous salary. But when Rowan arrives at Heatherbrae House, she is smitten—by the luxurious “smart” home fitted out with all modern conveniences, by the beautiful Scottish Highlands, and by this picture-perfect family. What she doesn’t know is that she’s stepping into a nightmare—one that will end with a child dead and herself in prison awaiting trial for murder. Writing to her lawyer from prison, she struggles to explain the unraveling events that led to her incarceration, the coincidental happenings, the seemingly calculated moves. Now Rowan’s in a fight to prove her innocence. Full of spellbinding menace and told in Ruth Ware’s signature suspenseful style, The Turn of the Key promises to be the most spine-tingling yet. 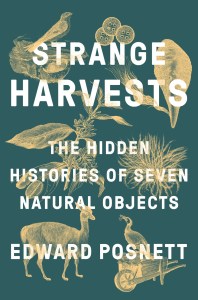 In this beguiling book, Edward Posnett journeys to some of the most far-flung locales on the planet to bring us seven wonders of the natural world—eiderdown, vicuña fiber, sea silk, vegetable ivory, civet coffee, guano, and edible birds’ nests—that promise ways of using nature without damaging it. To the rest of the world these materials are mere commodities, but to their harvesters they are imbued with myth, tradition, folklore, and ritual, and form part of a shared identity and history. Strange Harvests follows the journeys of these uncommon products from some of the most remote areas of the world to its most populated urban centers, making us see the world with wonder, curiosity, and new concern.

When Berta Isla was a schoolgirl, she decided she would marry Tomás Nevinson—the dashing half-Spanish, half-English boy in her class with an extraordinary gift for languages. But when Tomás returns to Madrid from his studies at Oxford, he is a changed man. Unbeknownst to her, he has been approached by an agent from the British intelligence services, and he has unwittingly set in motion events that will derail forever the life they had planned. With peerless insight into the most shadowed corners of the human soul, Marías plunges the reader into the growing chasm between Berta and Tomás and the decisions that irreversibly change the course of the couple’s fate. Berta Isla is a novel of love and truth, fear and secrecy, buried identities, and the destinies we bring upon ourselves.