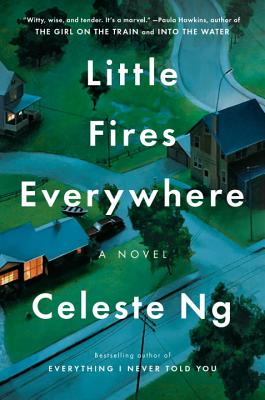 A conversation with Celeste Ng, author of the bestselling Everything I Never Told You and, now, Little Fires Everywhere.

Celeste Ng will appear at BookPeople on Tuesday, September 26th, at 7pm, in conversation with Clay Smith of Kirkus Reviews.

Q: Tell us a bit about Shaker Heights. Do you see it as representative of Every Town, USA, or is there something you feel makes Shaker Heights stand apart?

A: Growing up, I always thought that my hometown was pretty much just like everywhere else—I think most people do. And in many ways, Shaker Heights is a lot like suburbs everywhere: it’s placid and idyllic and full of well-intentioned families.

But when I went away to college, I discovered that Shaker Heights really was unusual in a lot of ways. I thought it was normal—or at not unusual—to have a race relations group at your high school, and to live next door to people of different races. I thought it was weird to put your garbage on the curb and normal to get fined if you didn’t mow your lawn. Yet Shaker Heights is not exactly Stepford, either: the town truly values diversity, in everything from actively encouraging an integrated population to insisting on variation in the designs of the houses.

As I researched, I learned more about the history of the city and how deeply ingrained its idealism is: right from the beginning, Shaker Heights wanted to be a little utopia, and they take that more seriously than any community I’ve ever seen. I sometimes sum up the town’s goal as to be just like everyone else, only better—and in that sense, Shaker Heights is both a lot like many towns across the country and totally different from any other place I know.

Q: You were born in Pittsburgh and when you were nine years old, your family moved to Shaker Heights, where you lived until you went college. How much did you draw from your own adolescent and teen years while writing the book?

A: I was a high schooler at the time the book is set, and I had a lot of fun sending the teens in the novel to my old haunts. (I’ve consumed more fries in that diner—and spent more quarters into the jukebox there—than I can count, and I visited it again to sample the fries while writing the book. Purely for research purposes, obviously.) So much of the scene-setting comes from memory, but I did need a refresher. Meghan Hayes, the Local History Librarian at the Shaker Heights Public Library, helped me find old yearbooks, issues of Shaker magazine, and copies of the Shakerite, the high school newspaper—invaluable references for what we wore, what we were talking about at the time, what slang we used.

Q: We see there are many characters who have a supposedly color-blind mindset that they use to justify their words and actions, or lack of. What do you hope readers will take away from these viewpoints and conversations?

A: The novel is set in 1997 and 1998, which is two decades ago, yet doesn’t feel that far away. It’s easy to forget how the conversation around race at that time mostly involved discounting or ignoring it—I think of the blithe (yet often problematic) Benetton ads of that era that perfectly captured the “Skin color doesn’t matter! We’re all one!” mentality.

Now we’re starting to be aware of the problems with not “seeing race”: ignoring race means ignoring longstanding problems and history, as well as ignoring important aspects of a person’s identity. I hope readers, encountering that allegedly race-blind mindset in these pages, will reflect on the ways our views have changed—and on the ways they haven’t changed as much as they might need to.

Q: Can you talk about the inspiration for Mia’s art? Why did you choose to have her be a photographer?

A: I’ve always been interested in art; I would have done a minor in art history if I could have. Photography is particularly interesting to me because it’s often seen as objective—after all, the camera captures what it sees—but it’s also inherently subjective: so much depends on the framing of the photograph, deciding what gets included and what gets left out, how it’s shown. It’s a peculiar combination of technology and human perspective and that makes really rich material for fiction.

I knew a little bit about photography from art history, but to create Mia’s art, I read more about the history of the medium. I also looked at the works of contemporary photographers and artists who use photographs as in their work, so I could get a sense of what these artists were doing and why. Then came the fun part: making up Mia’s photographs. They’re all pure invention but were inspired by the ways contemporary artists experiment with altering their photographs. For various reasons (which will be clear after you’ve read the book!) she’s very concerned with the idea of starting over, so nearly all of her work has to do with change or transformation in some way.

In a case of art influencing real life, writing this novel has sparked my own interest in learning photography. My dad was an amateur photographer, and I have some of his old cameras, so I’m starting to take some photographs of my own.

Q: The exchange about dolls in the courtroom will resonate with any parent or child who has looked for a toy or book that looks like them but can’t find it, or what they do find is outdated. Was this an experience you had growing up? How have things changed now that you’re a parent?

A: My mother was aware of this issue way before it entered the main cultural conversation. Anytime she found a book with Asian characters, she would buy it for me—which I now realize was her way of trying to show me myself on the page. Often the choice was between bad representation—as in the classic Five Chinese Brothers book mentioned in the novel—and no representation at all. She was never able to find Asian dolls, though, so she would buy me dark haired dolls when she could. When American Girl finally introduced its “American Girl of Today” dolls in 1995, my mother bought me the Asian one, even though by that age I was out of the doll stage. I think it was as much for her sake as for mine. (I still have it.)

As a mother myself, I’m now aware of this issue from the other side. When my son was small, he spotted an Asian boy baby doll in a toy store, and I snapped it up. If he wants an older Asian boy doll, though, I’m not sure what I’ll do. And it’s still difficult to find representations of East Asian children in books—though there are more now than there were 30 years ago!—and my son is biracial, so even East Asian characters don’t exactly look like him. On the positive side, this is a topic of conversation in the literary world right now, and I hope that more publishers will put out books featuring diverse children, so that more kids can see themselves represented on the page.

Q: The stories of mothers—Mrs. Richardson, Mia, Bebe, Linda McCullough—interweave and clash in different, sometimes shocking, sometimes deeply moving ways. At the heart of the court case is the difficult question of who “deserves” to be a mother. Why did you want to tackle this subject?

A: I think a lot about these issues because I’m both a mother and a daughter: what motherhood is, what my relationship to it is, what society expects of women who are mothers, or who aren’t. How we’re “supposed” to go about this whole business of motherhood. I have friends who’ve conceived easily, who’ve struggled to conceive, who’ve adopted or gone through invasive IVF procedures or used surrogates, or who’ve decided not to conceive—and the main constant in all of their experiences seems to be judgment. Motherhood seems to be a no-win battle: however you decide to do (or not do) it, someone’s going to be criticizing you. You went to too great lengths trying to conceive. You didn’t go to great enough lengths. You had the baby too young. You should have kept the baby even though you were young. You shouldn’t have waited so long to try and have a baby. You’re a too involved mother. You’re not involved enough because you let your child play on the playground alone. It never ends.

It strikes me that while all this judgment goes on, the options available to women become fewer and fewer. I’m not even (just) talking about the right to choose—across the U.S., women have less access to birth control, health care, reproductive education, and post-partum support. So we give women less information about their bodies and reproduction, less control over their bodies, and less support during and after pregnancy—and then we criticize them fiercely for whatever they end up doing. This seems not only unfair to me but a recipe for societal disaster. I don’t have answers here, but I wanted to raise questions about what we expect of mothers and who we think “deserves” to be a mother and who doesn’t—and why we think that question is ours to decide.

Q: This book, like Everything I Never Told You, takes place at a time before everyone has a cell phone and is instantly interconnected. Do you feel that having your characters and their stories exist before technology took over our lives allows them to act and think with more freedom?

A: As many of my readers probably know, I’m a social media junkie—I can often be found on procrastinating on Twitter when I’m supposed to be writing. Generally, I’m grateful to be living in our interconnected world: I get to connect with people all over the globe; virtually any information I need is available to me at the click of a button; and when I’m away from home, my friends and family are in my pocket, seconds away by video call or text. For a writer who spends most of the day at home and inside her own head, that sense of connectedness and community is a godsend.

But all this connectedness has a downside: it leaves less space for mystery. If I want to know where a friend is, I can check her Facebook or Twitter feed or see if she’s checked in on Foursquare or—if it comes to that—ping her phone and ask her to share her location. Information is hard to erase from the internet, too: whatever you said or did in the past follows you like a tail dragging along behind you. That has its own potential for fiction, but in Little Fires Everywhere I needed some shadowy places where mysteries could lurk, where secrets could stay hidden and pasts could be—at least temporarily—shed.