Skip to content
bookpeopleatx New Books, Uncategorized June 26, 2017June 21, 2017
Spoonbenders is a new novel from Daryl Gregory, author of Afterparty, The Devil’s Alphabet, and more. Spoonbenders is already becoming a bookseller favorite here at the store. Check out some of our booksellers’ reviews below and make sure to come see Daryl Gregory here on July 10th at 7pm! 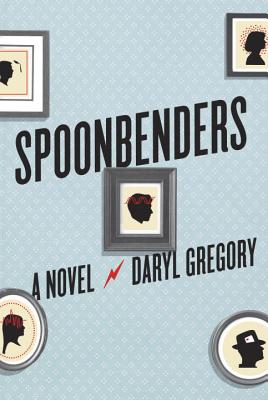 A fantastic and utterly hilarious look at family and what it takes to live with special people. The Telemachus family was famous for a time – using their psychic powers to wow audiences everywhere, but after a TV appearance debunks them, they fade from renown, but that does not diminish their spirit. Teddy, the patriarch who has always been a con man and card shark, struggles to understand his diverse children: Frankie, who could move things with his mind, is in debt to the mob; Irene, the human lie detector, idles in a minimum wage job at a grocery; Buddy, who could predict winners at the races and Cub scores, is silent most of the time, building projects only he knows the reasons to; and Matty, the grandson is just finding out what his gift is. Gregory’s characters are dynamic and fun and the action he brings – what with the mob on one side and the CIA on the other – moves the story along at a head spinning pace. The story is really about the importance of family and when you are part of what was once a famous family, it is difficult not to want to have fame again. Well written and engaging to read!
— Raul Chapa, Inventory Manager
Spoonbenders is probably one of the more interesting books I have read about psychics. I love the idea behind the book and the way that it is told. Without spoiling anything I can say that the way the book is written is part of the fun of the book. We get to follow multiple members of this amazing family and grow to really care for each member, yes even Frankie. Even foregoing the great psychic story-line we have the engrossing tale of a family still dealing with the loss of their rock, their mother, and how it has affected each of their lives. This resonated with me on a deep level due to my relationship with my own family. I would recommend this to those looking for a fun read that deals with things both mundane and amazing.
— Will Bason, Bookseller