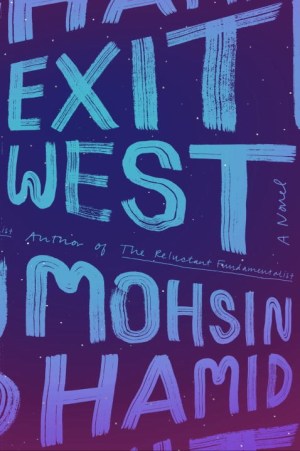 Each month, we choose one book as our Top Shelf pick, the book you absolutely should not miss. This month, that pick is Exit West by Mohsin Hamid, out today from Riverhead books. And, in recognition of just how timely and relevant this book is, we’re going to donate part of the proceeds from our sales of this title to Caritas of Austin. Their work is so in line with the message of this book, and we hope you’ll both read this book and support this wonderful organization. Our review of Exit West is below.

Mohsin Hamid’s Exit West is a book of remarkable impact: it’s a love story, a human story, a story of being forced to leave everything you know. It is magical, but it is not escape, and it is spiritual in the sense of a narrative delivered with the directness and cadency of a spiritual text. More than all of this though, Exit West is a story of now.

In his latest novel, Hamid powerfully illustrates that the refugee experience begins long before the day you cram your dearest possessions into a small pack that won’t arouse suspicion. Before the fighting descends on the street you take to work, before the curfews and checkpoints that require interrogation and payment, and before your mattresses are used for stopping bullets instead of sleeping. Perhaps it begins the day the government cuts off cell reception and internet, an “anti-terrorist measure” that leaves ordinary citizens–like Hamid’s protagonists Nadia and Saeed, like you and me–marooned, alone, and afraid.

In spite of, or perhaps because of, such extreme conditions, companionship sparks and love develops between Nadia–an independent young woman who listens to vinyl records and chooses to wear a burqa–and Saeed–the romantic young man who prays as a lament, a consolation, and a hope, who loves the stars and strives to be like his father. There’s nothing surreal or exotic about their relationship, and as the war outside intensifies and they hold each other late at night, their discussions are a mad grab at normalcy: the precise color of the fridge, the sorry state of his toothbrush, how loudly she snores when she has a cold.  Nothing surreal besides their decision to escape through the rumored, magical doors.

Mohsin Hamid is well-known for his radically inventive experimentation with literary form and device–Exit West is no exception, with lyrical sentences lasting for pages and blacker-than-night doorways that transport a person across the globe. It’s through one of these doors that Nadia and Saeed secure passage–a shattering moment of sacrifice, punctuated by Hamid’s agonizing line “but that is the way of things, for when we migrate we murder from our lives those we leave behind.”

The magic of the doors ends with transportation that Nadia describes as both like dying and being born–no Wonderland or Neverwhere awaits, the doors are tributaries unceremoniously dumping refugees and immigrants into great seas of humanity that mix and shift fluidly, mostly safely. But while the seas are mostly safe, the shores are not: nationalists–maddened by the surge of immigrants through un-policeable doors–lead deadly riots, set fire to inhabited buildings, surround the camps with military tanks, and cut off electricity. But how long can you keep running away?

Exit West is an incredibly special book, in part because it is a book. Unlike any other format, reading about these lives destroys any visual or language barriers we might put up, forcing us to confront the reality that these are people, individuals, human beings–sometimes religious, sometimes not–who listen to music, have mothers and fathers, and who fall in love. They are just like the people we know, the people we are–not some vague unknown, far-far away–made potent and heartbreaking by the immediacy and urgency of their circumstances, and the familiarity of their daily life. Exit West is an incredibly special book, because it begs the question: what if you could relate to a refugee, expulsed from anything and everything they knew and defined as “home”? And, having related, what will you do now?