Glenn Frankel brings his new book High Noon: The Hollywood Blacklist and the Making of an American Classic to BookPeople on Thursday, March 2 at 7 PM.

Much like he did with his book about that other monumental and great movie/western, The Searchers, Glenn Frankel dissects High Noon and all its behind the scenes machinations. He does a monumental job of pulling all of the disparate characters operating in Hollywood at the time along with a rogues gallery of politicians seemingly anxious to get their time in the spotlight. Mr. Frankel takes what on the surface is seemingly a quiet boiler plate western shot in black and white on a tight budget with a giant movie star on the down hill side of his career; pairs it with a crazy political witch hunt and educates us why High Noon deserves the accolades it received at its release and why it is till thought of today as one of the greatest movies ever made. 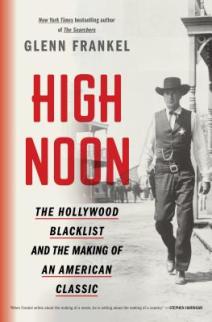 Prior to WWll; there were a lot of folks who during the Great Depression had turned to the American wing of the Communist Party for relief. A lot of these folks were creative types. Writers, Directors, Actors, Producers; all looking out to survive and wanting a better life for themselves and others.

Cut to 1947. The world is still rebuilding itself from the horrors that engulfed it as a result of World War ll.  With the Nazi’s and Imperial Japan vanquished, our new collective enemy is the Red Menace amassing itself in the Soviet Union and elsewhere. The House Un-American Committee has turned its sights on Hollywood to ferret out Communist Influence in movies.

Careers are cratered, people are black listed and friends and family are pitted against one another. Reputations are shattered, people stab each other in the back, throw themselves on their own swords and disappear quietly into the night.

One of those who was blacklisted for refusing to give names of other members of the Communist Party from when they were a member was Carl Foreman, an Academy Award nominated screen writer. He was one of those pre war Communist Party members who had gone onto serve honorably in the U.S. Army during the war. His refusal to name names got him on the blacklist.

He had already written High Noon and the picture was in production when he was called before the committee, the result being he was cut off from the picture before it was finished and he ended up exiling himself to England.

Just how did the movie makers get one of Hollywood’s most staunchly conservative actors, Gary Cooper, to play the lead? Why Did Cooper go up against staunch anti-communitsts like the extremely powerful gossip columnist Hedda Hopper and fellow cowboy star John Wayne?

Glenn Frankel pulls the HUAC activity and the making of High Noon together into a fact rich narrative that really shines a light on the battle between Hollywood Star makers and Washington DC movers and shakers for the souls of the populace.

High Noon ended up being a huge hit for the studio and Gary Cooper won an Academy Award for best actor. This happened even though it was widely thought to be a thinly veiled allegory about the HUAC hearings and how they were ruining people’s lives.

In the end, High Noon was 85 minutes of stark black and white western Sturm and drang that has had a lasting impact. Most movie aficionados will list it as one of the best westerns ever made (right up there with the aforementioned Searchers) and many will list it as one of the best movies ever made. Its impact on the Hollywood psyche was such that Howard Hawks and John Wayne made not one; but three responses to what they considered High Noon’s  groveling Marshall Will Kane (Rio Bravo, El Dorado, and Rio Lobo).

Come to BookPeople on Thursday, March 2, 2017 at 7 PM to meet Glenn Frankel and get High Noon signed! Maybe he will tell us what movie he is going to dissect next? I vote for the aforementioned Rio Bravo…