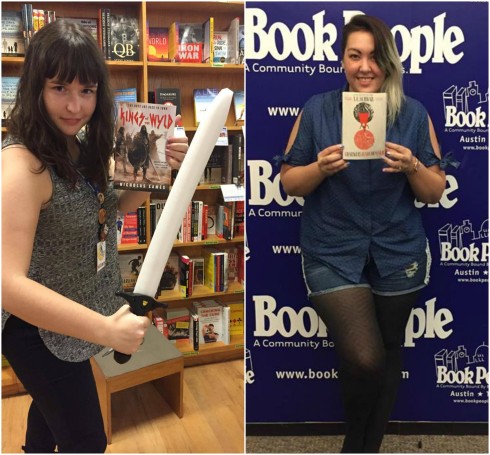 The Shades of Magic Trilogy by V.E. Schwab (A Darker Shade of Magic, A Gathering of Shadows, and A Conjuring of Light)

I’m in the middle of the Shades of Magic Trilogy by V.E. Schwab! The trilogy starts with A Darker Shade of Magic, introducing Kell (talented and rare blood magician known as a Traveler) and and Lila (wannabe pirate and skilled wanted criminal). Schwab has a talent for building fantastical worlds, cinematic scenes, and a story that just doesn’t let go. Plus the first book is very satisfying story-wise (none of that cliffhanger nonsense here!) relying on the fascinating and complex world and characters to pull you into the second book–A Gathering of Shadows. A little graphic (Kell is a blood magician, after all, and in Schwab’s world this involves self-harm), this is a fun, thrilling book I think any fan of fantasy 13 and up is going to enjoy. I’m so excited to start A Conjuring of Light — can’t wait!! You can find copies of The Shades of Magic Trilogy on our shelves and via bookpeople.com. Don’t miss our event with V.E. Schwab on March 1st at 7:00PM to celebrate the release of A Conjuring of Light!

Kings of the Wyld by Nicholas Eames

I can’t remember the last time a book made me laugh out loud so often. Clay Cooper and his band of monster-killing mercenaries, Saga, used to be legendary.  Now they’ve grown old, fat, and drunk, and their fighting days are far behind them. That is until the band’s leader, Golden Gabe, seeks to get the band back together to save his daughter from a monstrous horde. So begins the epic journey to reunite the old band-mates, get back in fightin’ shape, and travel across the treacherous Heartwyld forest. This book is wyld-ly fun, action-packed, hilariously funny, and so full of heart. Eames does epic fantasy in such a way that makes it feel refreshingly unique while at the same time playfully reminiscent of the classic, beloved genre tropes — which certainly seems pretty impressive for a debut. I fell in love with the characters and their world, and I’m so glad I got to join in on the adventure. You can find copies of Kings of the Wyld on our shelves and via bookpeople.com.

The Idiot by Elif Batuman

I’m reading Elif Batuman’s upcoming novel The Idiot. It’s 1995, and Selin, the book’s narrator and protagonist, has just arrived at Harvard. At college, she experiences not so much culture shock but a sort of lack in her relationship with and knowledge of herself. She falls in love with Ivan, a Hungarian math major from her Russian language class. Selin’s voice mixes deadpan humor with profound confusion (and sometimes plain profundity) to great effect. Batuman’s prose is well paced, funny, affecting, and brilliantly written–not flowery but not spartan–with subtle nods to Russian literature hidden inside. I’m not quite halfway through, but I’m already sure I’ll recommend this a lot after it comes out on March 14th. Soon, you can find copies of The Idiot on our shelves and via bookpeople.com.

I usually read nonfiction, but BookPeople encourages its booksellers to read outside of their genres and at my mother-in-law’s insistence, I picked up Small Great Things. It’s set in present time with an African American nurse who is asked not to touch the newborn baby of a white supremacist couple. Written from multiple perspectives, you’re able to live the emotions of the very experienced nurse, the young father and the public defender who is taking this case to heart. Clearly well researched, Picoult encourages you to examine your own thoughts on race relations and the consequences thereof. You can find copies of Small Great Things on our shelves and via bookpeople.com.

Believing Is Seeing: Observations on the Mysteries of Photography by Errol Morris

If you know anything about Morris’ body of work – in documentary, periodical essays, or maybe for a select few his services as a private investigator – you know of his unwavering belief in objective truth, that finding it requires vigilant, exhausting study. If something is obvious, stop. Look at it again. In this collection, the stories and processes behind photographs occupies his obsessive mind. They murk, they lie. Nevertheless he delights in pulling them apart, intent that with firm intellect and imagination all may be revealed. Even if he’s wrong, that ethic gives me hope. You can find copies of Believing Is Seeing on our shelves and via bookpeople.com.