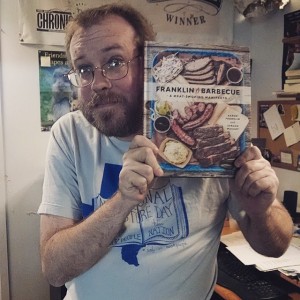 Somewhere along the path of life, Austin became famous for its barbecue. This was not always the case and, in fact, was considered a barbecue desert surrounded by the oases of Taylor and Lockhart. Now people from all over the world line-up and wait for brisket at such great places as John Mueller Meat Co, Micklethwait Craft Meats, and La Barbecue all because a former Mueller protege named Aaron Franklin broke through and put Austin’s name on the map.

It wasn’t easy. One of the first main takeaways from Franklin Barbecue: A Meat-Smoking Manifesto is just how much work Aaron put into making his dream a reality and just how close he was to any one thing going wrong and scuttling it forever. I know because I was there.

I first met Aaron and Stacey 15 years ago back when Aaron was the drummer for a rock ‘n roll band called Those Peabodys. We were young,we were proud, and we were filled with the inspiration that comes from participating in the DIY punk rock culture. Books and resources such as Maximum Rockandroll’s Book Your Own [Expletive -editor] Life and The Mechanic’s Guide put out by Simple Machine Records put in our hands the tools necessary for booking a tour and/or starting and running a record label. We were encouraged to “do it ourself.”

As described in the book, during this time Aaron became obsessed with smoking brisket. He’d have cook outs at his house where he’d feed all the sundry members of our little punk rock community with BBQ of various quality (always great in my book, mostly awful in Aaron’s) and he started working for John Mueller at his short lived establishment on Manor Road (the true ground zero for Austin’s brisket explosion) until, step-by-step he opened up a food truck with rest being history.

And that story would be the perfect basis for an entire book but ,no, Aaron Franklin only devotes 40 pages to it. You see the book’s called a manifesto not a memoir. Like the thousands of people who contributed to Book Your Own [Expletive -editor] Life all the contacts and experiences they had touring the United States and Jenny Toomey and Kristin Thomson who shared the lessons they learned running an independent record label in their book The Mechanic’s Guide, Aaron Franklin is devoted to giving back to the community that created him.

Franklin Barbecue: A Meat-Smoking Manifesto is a DIY/punk rock guide to smoking brisket. Aaron walks you through some basic welding tips to help improve the efficacy of your smoker. He spends 10 pages informing you about wood selection, how to get it, how to season it, and even how to cut it. There are entire chapters devoted to the fire & smoke, the meat and how to cook it. All stated matter of factly and with precision. He’s stood upon the shoulders of giants to become the top barbecue man in Austin and now he’s returning the favor and giving you a boost to stand upon his.

I’m extremely happy about the successes Aaron and Stacy Franklin have attained over the last 5 years and I’m proud to be writing this little essay about the best darn barbecue guide I’ve read. Hopefully this tome will stand the test of time and somewhere there’s a kid who’s gonna read it and start her own pit that will produce brisket that will knock our socks off and the process will start all over again.

Copies of Franklin Barbecue are now available to pre-order via http://www.bookpeople.com. Join us here at BookPeople Wednesday, April 29, 7pm when Aaron Franklin speaks about and signs Franklin Barbecue.

One thought on “Top Shelf in April: FRANKLIN BARBECUE by Aaron Franklin”