May’s here, and the new releases have us absolutely floored. Not only do we finally get a taste of the latest Emma Straub and Elizabeth Acevedo, there’s also a memoir, a sci-fi caper, and a “creepy…wonderful” new novel that comes highly recommended by our booksellers!

All Adults Here by Emma Straub

When Astrid Strick witnesses a school bus accident in the center of town, it jostles loose a repressed memory from her young parenting days decades earlier. Suddenly, Astrid realizes she was not quite the parent she thought she’d been to her three, now-grown children. But to what consequence?

Astrid’s youngest son is drifting and unfocused, making parenting mistakes of his own. Her daughter is pregnant yet struggling to give up her own adolescence. And her eldest seems to measure his adult life according to standards no one else shares. But who gets to decide, so many years later, which long-ago lapses were the ones that mattered? Who decides which apologies really count? It might be that only Astrid’s thirteen-year-old granddaughter and her new friend really understand the courage it takes to tell the truth to the people you love the most.

In All Adults Here, Emma Straub’s unique alchemy of wisdom, humor, and insight come together in a deeply satisfying story about adult siblings, aging parents, high school boyfriends, middle school mean girls, the lifelong effects of birth order, and all the other things that follow us into adulthood, whether we like them to or not.

Booksellers couldn’t get enough of this one, and we’re just tickled to announce that Emma Straub will be joining us virtually on Zoom later this month on, Sunday, May 17th at 2PM CST, to talk all things All Adults Here. Learn more about joining the discussion here!

Clap When You Land by Elizabeth Acevedo

A powerful novel in verse by award-winning and bestselling author Elizabeth Acevedo, about two sisters grieving the devastating loss of their father who learn about each other after his death and must grapple with what this bittersweet new bond means for them.

Camino Rios lives for the summers, when her father visits her in the Dominican Republic. But this year, on the day when his plane is supposed to land, Camino arrives at the airport to see crowds of crying people…

In New York City, Yahaira Rios is called to the principal’s office, where her mother is waiting to tell her that her father, her hero, has died in a plane crash.

Separated by distance—and Papi’s secrets—the two girls are forced to face a new reality in which their father is dead and their lives are forever altered.

And then, when it seems like they’ve lost everything of their father, they learn of each other.

The intimate debut memoir by the man known to the world as Mister Rogers’ Neighborhood’s Officer Clemmons, who made history as the first African American actor to have a recurring role on a children’s television program.

When he created the role of Officer Clemmons on the award-winning television series Mister Rogers’ Neighborhood, François Clemmons made history as the first African American actor to have a recurring role on a children’s program. A new, wide world opened for Clemmons—but one that also required him to make painful personal choices and sacrifices. Officer Clemmons details Clemmons’s incredible life story, beginning with his early years in Alabama and Ohio, marked by family trauma and loss, through his studies as a music major at Oberlin College, where Clemmons began to investigate and embrace his homosexuality, to a chance encounter with Fred Rogers that changed the whole course of both men’s lives, leading to a deep, spiritual friendship and mentorship spanning nearly forty years.

From New York to Russia, Berlin to California, Grammy Award–winner Clemmons has performed for audiences around the world and remains a beloved figure. Evocative and intimate, and buoyed by its author’s own vivacious, inimitable energy, Officer Clemmons chronicles a historical and enlightening life and career of a man who has brought joy to millions of adults and children, across generations and borders. 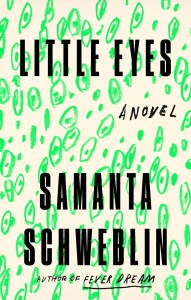 A visionary novel about our interconnected present, about the collision of horror and humanity, from a master of the spine-tingling tale.

They’ve infiltrated homes in Hong Kong, shops in Vancouver, the streets of in Sierra Leone, town squares in Oaxaca, schools in Tel Aviv, bedrooms in Indiana. They’re everywhere. They’re here. They’re us. They’re not pets, or ghosts, or robots. They’re real people, but how can a person living in Berlin walk freely through the living room of someone in Sydney? How can someone in Bangkok have breakfast with your children in Buenos Aires, without your knowing? Especially when these people are completely anonymous, unknown, unfindable.

The characters in Samanta Schweblin’s brilliant new novel, Little Eyes, reveal the beauty of connection between far-flung souls—but yet they also expose the ugly side of our increasingly linked world. Trusting strangers can lead to unexpected love, playful encounters, and marvelous adventure, butbut what happens when it can also pave the way for unimaginable terror? This is a story that is already happening; it’s familiar and unsettling because it’s our present and we’re living it, we just don’t know it yet. In this prophecy of a story, Schweblin creates a dark and complex world that’s somehow so sensible, so recognizable, that once it’s entered, no one can ever leave.

A Registry of My Passage Upon the Earth by Daniel Mason

“Nine tales of human endurance, accomplishment, and epiphany told with style and brio” (Kirkus) from the bestselling, award-winning author of The Winter Soldier and The Piano Tuner.
On a fateful flight, a balloonist makes a discovery that changes her life forever. A telegraph operator finds an unexpected companion in the middle of the Amazon. A doctor is beset by seizures, in which he is possessed by a second, perhaps better, version of himself. And in Regency London, a bare-knuckle fighter prepares to face his most fearsome opponent, while a young mother seeks a miraculous cure for her ailing son.
At times funny and irreverent, always moving and deeply urgent, these stories — among them a National Magazine Award and a Pushcart Prize winner — cap a fifteen-year project. From the Nile’s depths to the highest reaches of the atmosphere, from volcano-racked islands to an asylum on the outskirts of Rio de Janeiro, these are tales of ecstasy, epiphany, and what the New York Times Magazine called the “struggle for survival . . . hand to hand, word to word,” by “one of the finest prose stylists in American fiction.” 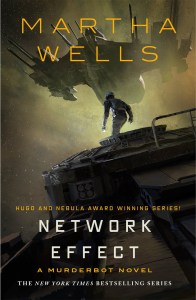 “We are all a little bit Murderbot.” – NPR

The New York Times and USA Today bestselling Murderbot series exploded onto the scene in 2017, and the world has not been the same, since. The series has grown with every release, with book #2 debuting at 95 on the USA Today Bestseller List, #3 at 77, and #4 at 48. A quarter of a million copies later, Murderbot is back in its highly-anticipated, first, full-length standalone novel. Network Effect offers an opportunity like never before for bookstore readers to dive into the series.

You know that feeling when you’re at work, and you’ve had enough of people, and then the boss walks in with yet another job that needs to be done right this second or the world will end, but all you want to do is go home and binge your favorite shows? And you’re a sentient murder machine programmed for destruction? Congratulations, you’re Murderbot.

Come for the pew-pew space battles, stay for the most relatable A.I. you’ll read this century.

This first week of May presents a ton of reading options for us, we don’t know where to start! But wherever you lean, you can shop these treats through us on the BookPeople  website today!

One thought on “It’s Gonna be May…And the New Books Look Good!”