We talk to local author Lindsay Leslie about her upcoming book Nova the Star Eater, cool space facts, and pie! Check out the Q&A below and pre-order a signed, personalized copy here.

Lindsay Leslie is one of our talented local authors! We hosted her for the release of her first picture book, the wonderfully creative This Book is Spineless, and are currently running a pre-order campaign for her second book, Nova the Star Eater— so you can get signed, personalized copies shipped to wherever you live! We love supporting our local authors, and Lindsay is also a huge supporter of BookPeople and the literary community in our beloved town. So in celebration of Nova, we couldn’t resist– we sent her a few of our burning questions about writing and storytelling, space, baking pies, and more.

BookPeople: We read in your bio that you got a telescope when you were a kid– is that what sparked your interest in science and space?

Lindsay: Maybe? I wish I could be confident in an answer, but I vividly remember so many moments in time that could have sparked my interest in space – from the gifted telescope to an old Star Wars album cover my dad had to my first ever movie in the theater – E.T. The inspiration was all around me. The concepts of space and its unrestrained qualities really drew me in.

BP: What specifically inspired you to write about Nova? How did this adorable character form in your head?

LL: The idea jumped in my head while driving my eldest son home from who-knows-where. He was chatting to me about Pokemon. And when my kids start to talk to me about things like Minecraft and Pokemon, I start to glaze over. Sorry, kids. I just don’t know what in the world they are talking about. But then, he said something amazing. He said, “There’s this Pokemon that eats stars.” I heard that. Then my mind began to play. What if there were some kind of intergalactic being that ate stars? What if it ate the Sun? Oh, wow. That could be really fun. (I just might have a twisted sense of humor.) And then Nova was born.

BP: What do you love most about space? What are some of the weirdest space facts you know?

LL: What I love most is how very vast it is and how very very small we are. Space puts you right in your place. Space also allows you the opportunity to dream, think, wonder, and create. The what-ifs are endless! Space also delivers the most jaw-dropping, mind-blowing realities. Some weird space facts? Many of the comets we see are thought to have been born in the Oort Cloud, which surrounds the edge of our solar system. I like to think of the Oort Cloud as a galactic snowball factory. Another cool space fact is something I learned more about at the Hayden Planetarium at the American Museum of Natural History. Based on findings by Edwin Hubble, our universe is not static. It’s expanding. Quickly. Think about that. Will space expand forever? If not, then what will it do and why? Seriously, I could listen to experts talk about this forever.

BP: What do you hope young readers take away from Nova the Star Eater?

LL: I would love for young readers to take away a few things: 1) a huge respect for the Sun and what it provides our Earth and all of its inhabitants daily, 2) a curiosity for what might be out there in space beyond the stars we can see with our own eyes, and 3) a respect for other people’s stuff.

BP: You now have two picture books under your belt, This Book is Spineless and

Nova the Star Eater. What moved you to start writing picture books?

LL: I believe I was heading in that direction all my life. I’ve always been a writer and I’ve always had this wacky creative side to me, but I didn’t quite know where I fit career wise. It took having my own children and being reintroduced to picture books as an adult to connect the dots. I then saw picture books in a different capacity. Plus, just like space, children’s imaginations seem to have no bounds. That’s magical.

BP: What is your favorite movie about space?

LL: Oh, this is an evil question, because I love so many like 2001: A Space Odyssey, Alien, First Man, The Fifth Element, Star Wars, Space Camp! But my ultimate favorite space movie ever: Wall-E. Yep. I will watch it over and over again, and I have many fond connections with that movie and my kiddos.

BP: What astronaut food would you like to try– or have you tried?

LL: Oh, I’ve tried the dehydrated ice cream sandwich. It was very … um … dehydrated. I think I would like to try the French fries because I have never met a potato I didn’t love.

BP: If you could visit one other planet, which one would you visit and why?

LL: Mars, hands down. It’s my eldest son’s name. Humans may end up there, so why not visit?

BP: What would you name a star or planet?

LL: Loofah Escape (Only my husband will think this is amusing.)

BP: If you could bring an alien to visit earth and show it around Austin for a day, where would you take it?

LL: Have I told you how much I dig your questions? I would take that lovely alien on a run around Lady Bird Lake, then to Magnolia Cafe for pancakes, on to a dip in Deep Eddy, swing on by El Caribe for my favorite Tex-Mex, off to BookPeople (of course), bowling at the Union Underground on the UT campus, and then to dinner at Kemuri Tatsu-Ya.

BP: What were some of your favorite books growing up?

LL: I could not put down many of the Roald Dahl books – my favorite being The Witches. The BFG and James and the Giant Peach, as runners-up. I also adored The Phantom Tollbooth. I really like the absurd.

BP: What are some of your favorite books now?

LL: Kafka on the Shore by Haruki Murakami, A Visit from the Goon Squad by Jennifer Egan, The Family Fang by Kevin Wilson, Brown Girl Dreaming by Jacqueline Woodson, The Great Hibernation by Tara Dairman, After the Fall by Dan Santat, and Bob, Not Bob! by Liz Garton Scanlon & Audrey Vernick.

BP: What do you wish people knew about the children’s writing community?

LL: That we are serious writers. We write for children for so many reasons, whether it’s to inspire, to connect, to teach, etc. Writing for children is not a stepping stone to writing for adults. It is not easier.

BP: What are the biggest lessons you’ve learned since you got your first book published? What advice would you give to writers looking to get published?

LL: The main lesson in my mind as of late is how I am communicating and engaging with other writers, particularly those who are on the journey toward publication. I remind myself that my role is to encourage, uplift, and provide insight. I’ve run across too many published people lately who have been discouraging. I think that writers get enough discouragement. They have enough nay-saying going on in their own minds. I reflect on that and aim to lift up my fellow writers, help them improve, help them chase that carrot, not squash their dreams. 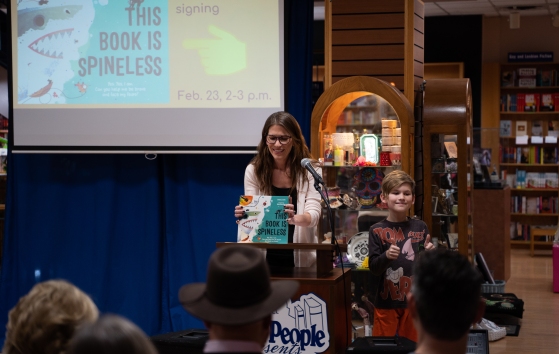 BP: We love the concept behind your blog, A Book & A Pie. What has been your favorite book/pie combo you’ve made? And what is your absolute FAVORITE pie to eat?

LL: I need to breathe some life into that blog, but this year, with two books out back-to-back, my mind has been elsewhere. With that said, my favorite pairing has to be After the Fall by Dan Santat with what I called my Therapeutic Pie. Not only is this book one of my all-time favorites, but when I tweeted the post out, Dan Santat replied and said, “Lovely pie. It looks like a Chinese Egg Tart, otherwise known as a “DAN TAT” DAN + SANTAT = DANTAT #mindblown #piecesfittingtogether.” Such a serendipitous Twitter moment.

My favorite pie is my mom’s chocolate meringue. Yum.