In high school, my brother Alan won the state heavyweight championship in his division. I was in college—he’s two years younger than I am—and I couldn’t make the championship, but my parents called in triumph to tell me the legendary tale. My brother had a move they called “The Hammer,” a magnificent feat of strength and determination, in which he used his body to convince another nearly-grown man to roll over and give up as the pain grew. He didn’t continue wrestling in college like Stephen Florida, but he was constantly on my mind as I read Gabe Habash’s luminary debut (and not just because he lives in Wilmington, NC, and there was a hurricane drowning it at the time). All of Stephen’s best qualities—the search for justice, the profound thoughtfulness and interest in philosophy, the single-minded intensity and focus—they are alive and well in my brother, though he does not wrestle any more. Stephen is not a man without flaws, of course; he is quick to anger and rash decisions, especially as the book goes on. He is already a man without a family, his parents dead in a car accident and his grandmother recently passed, and so the relationships with Linus, his best friend, and Mary Beth, the girl he might just love, are Stephen’s only lifelines besides wrestling. And then all three are gone. His knee is injured in a match. Linus stops speaking to him. Mary Beth leaves for a job sixteen hours’ drive away.

Stephen decides to prove that one of his coaches and one of his teachers (two separate men, not the same one) are evil. You know, just to pass the time while he’s recovering from surgery.

And yet! This just barely scratches the surface of what one can find in Stephen Florida! There is an extended scene in which Stephen visits an oil derrick, unsure of what his options for employment might be after college is over. He hasn’t really thought about anything other than the wrestling, which is how he ends up taking a shower after working on the oil rig in a company-rented bachelor pad with the nephew of a career counselor. Or you might be drawn in by the time Stephen steals his jazz professor’s truck to meet Mary Beth in a diner. What about the excursion to the farm of the boy who injured him, to eat eggs and leave a menacing gorilla mask in his barn? And what happens after the championships are over?

(My brother calls me every once in a while, and we have the privilege of having family to gossip about, unlike Stephen. And sometimes I ask him what it was like to play football and wrestle on a team, and he says that it was grueling and uncomfortable, but euphoric. And that, too, is like Stephen Florida.)

I’m sure I will be puzzling out this weird and wonderful for a long time yet, even after the New & Noteworthy book club discusses it on Thursday, September 27 at 7PM. But if you’re pondering it too, come and join me. Maybe we can figure some things out together. 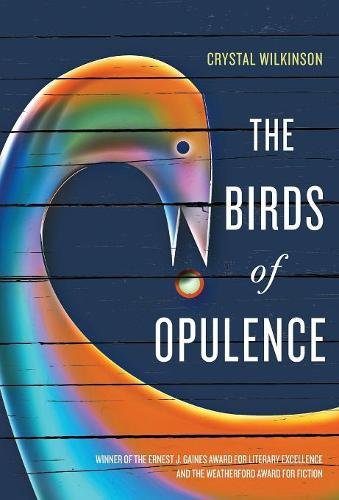 Before I go—if you like the New & Noteworthy book club, I want to encourage you to consider the Open Canon book club, organized by author Wiley Cash. It’s an online discussion book club dedicated to broadening the scope of the literary canon, specifically to include writers of diversity. Each month there is an online discussion with the author of the selected book in which readers can submit their questions and engage in the conversation. This month is the first meeting ever, and it happens to be Wednesday, September 26th, discussing The Birds of Opulence by Crystal Wilkinson (which you can buy from BookPeople for 10% off, just like all our in-person book clubs). I’ll be participating in the meeting on Wednesday, and I would love to talk to you on Thursday night too!