Even before working at BookPeople, I always recognized Merrilee when I visited my local bookstore. I loved exploring the kids section, and she was hard to miss– she’s tall and exuberant, ready to share her many hilarious stories at the drop of a hat. Once I started working here, it became even clearer to me that she is an excellent bookseller and an all-around fascinating human being. I firmly believe every bookstore needs a Merrilee. 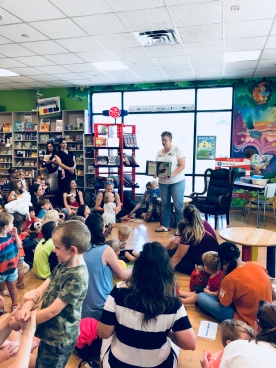 This week, she celebrated her 24th anniversary at BookPeople– she announced it on Tuesday, June 26th while she read Bark, George to 75+ toddlers and parents at a particularly lively storytime (we had a therapy dog by the name of Freddy Pickles as a special guest). In true Merrilee fashion, she made all our guests clap and congratulate her in unison. It was my pleasure to chat with Merrilee today about her time at BookPeople, while standing in our beloved Kids section, surrounded by books. –Eugenia V, Kids event & marketing coordinator

EV: Do you remember anything about that first year at BookPeople?

Merrilee: The first year is easy to remember because that was at the old store, on South Lamar. It was a lot smaller than this, and there was a lot less staff there. There were like 8 floor employees all together. The Kids section there was weird because everything from Readers to Teen Fiction was all in one section. It was a room maybe three times the size of our break room here. We had mandatory afternoon rubber band fights at about 3 o’clock. They weren’t really mandatory, but if you didn’t want to be in the rubber band fight, you had to hide in the bathroom because you were gonna get hit. It was just a matter of time. Not that we’re like the most serious business in the entire world… but it was even less so at the old store. A lot of the customers there were customers that had been shopping with us from the very beginning in 1970, so it was almost like you were hanging out with your friends. The customers were our friends, too.

EV: What’s your favorite thing about being a Kids bookseller?

Merrilee: Getting to see so many cute babies. It really is! All day, every day. I get to see cute babies, cute baby feet, and sweet little gingers that are wearing glasses. And I like seeing them grow up. I like the idea that the little kid who came to storytime here when she was 3 came to Camp Half-Blood when she was 12, and got a job here when she was 18– and I’ve seen her grow up the entire way. And now she’s like, in Chicago, making the world a better place. And I’m like, “I saw that whole thing happen!”

Merrilee: I started working here in ’94, and so he was 9. Tommy was like our first official BookKid, transferring from the old store to the new store. He’s now 33 and he’s been working here since the winter of 2003. He’s been here for almost 15 years.

EV: What do you love to read?

Merrilee: Children’s books, mostly picture books. I collect them. I appreciate the art in them. I can’t draw or paint or anything, but I have the talent to appreciate the art. And I love trashy genre fiction and nonfiction, mostly history, almost entirely American civil war.

EV: What’s been your favorite children’s book adapted into a movie or TV show?

EV: What is your go-to read aloud?

EV: If you had a dinner party– or a knitting party– with 5 authors and/or illustrators, who would you invite?

EV: What’s your most disgusting memory working in the Kids section?

EV: I remember the time you picked up a book and it was covered in vomit, and it got all over your shirt.

Merrilee: Well, that was disgusting also, but–

Merrilee: Well, the poop got me used to the idea that gross, disgusting things were going to happen. Well that, and also the time a kid peed on the floor and their parent came up to me and said, “My kid peed on your floor,” and then away they went.

EV: What do you think people would be most surprised to learn about you?

EV: Which fictional character do you most identify with and why?

Merrilee: Yes! Yes! If she liked babies, that would be me! I’m kidding. I seem mean on the outside, but I’m not. I’m just squishy and sugar on the inside.

EV: Do you remember a big thing that happened in the literary world that you got to witness here as a bookseller?

EV: One last thing. What are you currently reading?

Merrilee: I’m reading an ARC of Property of the Rebel Librarian by Allison Varnes, which is all about banning books, and it’s real hard for me to read. It’s real hard because I’m so against censorship. And I’m reading a nonfiction book about minimalizing your life and getting rid of all your crap, which is why I’m bringing all my crap to work. And I can minimalize to a certain extent, but I can’t get rid of yarn and I can’t get rid of books.

2 thoughts on “BookKids: Merrilee on 24 Years at BookPeople”