by Gregory Day and Eugenia Vela

There is this story that is wild unto itself and forgotten by time. It is a story of strong wills and neglect. This story spans from the empirical ego of the Nazi Party in Germany to the socialist struggles in 1960s Bolivia. Leni Riefenstahl’s illustrious documentaries, Che Guevara’s Nancahuazu Guerrillas, and the lost Incan city of Paitití are fringe details of this story. This story is about the Ertl family and how it dissolved. And it all really happened. 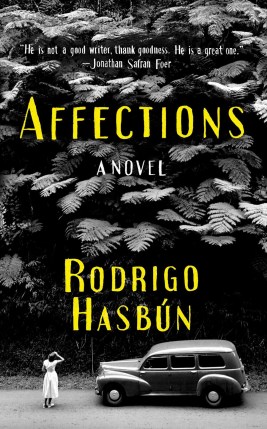 Rodrigo Hasbún’s novel Los Afectos (Affections) casts aside esoteric histories and political digressions for a microscopic consideration of how a family disintegrates. The Ertls come to Bolivia to make a “expedition documentary” after the fall of the Third Reich. Hans, once Leni Riefenstahl’s cameraman, drags his wife, daughters, and even his lover into the jungle seeking cinematic glory. However, what awaits them in the jungle are the seeds of the family’s destruction.

Episodic bursts follow the excursion taking us into disappointment after disappointment for the Ertl sisters, leaving them lonely and disillusioned. Living in the shadow of their “phantom father” the Ertl sisters go their own ways to fill the voids in their lives. One finds solitude, one flees to Europe, and most notably one joins guerilla fighters. This novel could have easily been about Hans Ertl and the nearly epic proportions of his life. It could have also been focused on Monika Ertl and her journey from European privilege to dissatisfied housewife to guerrilla assassin (both stories are true by the way).  But Hasbún is a much more thought provoking writer, wanting to explore how each of the Ertls have (pardon me) affected one another. His prose is so exacting he is able to craft scenes of a floundering marriage that feel just as anxious as a political assassination.

The relationship between the personal and the political, a relationship which dominates and dictates much of our lives, is front and center in Affections.The ideological gap between the Ertls divides them more so than any personal actions they have committed themselves. To paraphrase feminist icon Carol Hanisch, the personal is political for the Ertls. Monika abandons her privileged way of life to join guerilla fighters far from Hans’s warming to the military government to preserve his status. Even though there is a great deal of violence in at the fringes of this story (including one superbly crafted assassination), the real casualties are the family ties. With the wedges of time and politics firmly set, there is no going back. Youngest daughter Trixi states “We end up,” she says, “turning away from the people we love the most.”

In being a novel, Affections mines deeper than any biography could. Rarely, if ever, dates are given. Time moves only through the characters. They change as does the world. And as the world changes, so does family. Hasbun has handed us a marvel of a family drama and an engrossing political thriller. A story that, although is set nearly fifty years ago, reverberates emphatically.

Guess what? We also have copies of Los afectos available in our Spanish section!

Kids event/marketing coordinator Eugenia read Los afectos and this is what she has to say, in Spanish and English:

When I first heard we were hosting Bolivian author Rodrigo Hasbún for Affections, I knew I needed to read the book in its original Spanish. Fortunately, we have some copies right here at BookPeople (see what I did there?). Hasbún is an incredibly talented writer, a master of simple, beautiful language and character details that latch onto those deep, dark corners of your brain. My favorite parts in Los afectos were the intimate moments lived by members of the Ertl family— a quiet Christmas between mother and daughter, everyday conversations between sisters, the passing judgment, and the things left unsaid in this family of women—, moments that to me further elevate the already intriguing (true) story Hasbún has chosen to write about. If you enjoy reading in Spanish or want to read MORE in Spanish, I recommend Los afectos.

I’m interested in what readers of the English translation will find in this story, and am excited to have Rodrigo Hasbún here 9/15!

One thought on “Bookseller Review: Affections”