It’s impossible to speak about Arundhati Roy without also speaking about The God of Small Things. Published in 1997, it won the Booker prize and has been translated into over forty languages, garnering worldwide acclaim. I first encountered it about a decade following that and immediately fell in love. 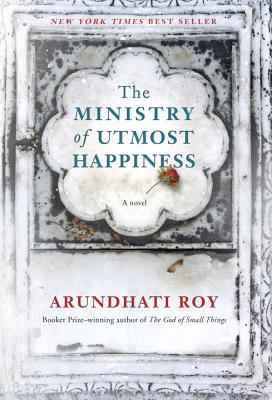 The God of Small Things is my favorite book, though I don’t often widely admit it. Roy’s words carry such depth and eviscerating beauty, they cut so to the core of things in such a miniscule yet profound way that speaking about them feels almost like sacrilege; some things are too meaningful to share so openly.

And now, twenty years later, I have had the privilege of reading Arundhati Roy’s fiction again.

The first time I held The Ministry of Utmost Happiness in my hands, I felt an acute sense of nervousness. It seemed impossible that anything could so profoundly reach into my soul as The God of Small Things had. I opened the book tremulously, excited and fearful. The moment I read the dedication– “To, the unconsoled”– I knew how absolutely ridiculous my fears had been. Roy’s words have a way of reaching to the very depths of things, they have a way of making their reader feel as if home has just been sighted after a very long time away. Or rather, that we are all searching for a home together.

Never before have I encountered an author who so skillfully uses words to express the inadequacy of those very words. Arundhati Roy’s great gift lies in her singular ability to explore the tangles of the world, those gray areas between life and death, joy and sorrow, wordlessness and articulation, the immeasurable beauty and the unfathomable ugliness of the world. And the long, slow unfolding of the lives which inhabit The Ministry of Utmost Happiness are truly a tangle of all these.

The book opens with an exploration of those tangles for which we have no words, those things which cannot easily be recognized or named, and the joy and pain which results from that realization. Jahanarah Begum, upon the birth of her fourth child, discovers that her son has both female and male physical characteristics.

“Her… reaction was to pick her baby up and hold him close while she fell through a crack between the world she knew and worlds she did not know existed. There, in the abyss, spinning through the darkness, everything she had been sure of until then, every single thing, from the smallest to the biggest, ceased to make sense to her. In Urdu, the only language she knew, all things, not just living things but all things–carpets, clothes, books, pens, musical instruments–had a gender. Everything was either masculine or feminine, man or woman. Everything except her baby. Yes of course she knew there was a word for those like him–Hijra. Two words actually, Hijra and Kinnar. But two words do not make a language.

Was it possible to live outside language? Naturally this question did not address itself to her in words, or as a single lucid sentence. It addressed itself to her as a soundless, embryonic howl.”

That soundless howl echoes through the rest of the narrative, across the life of that child, first called Aftab, then Anjum, as she navigates the tangled confusion of gender, of class, of finding a place to belong and finding room in herself for the depths of grief and the heights of joy. It echoes across city squares and graveyards, across pools of blood and saffron which litter the gutters, across the confusion of need and love and the unknowable depths of grief. It echoes through the joy which can be found in the very center of incredible awfulness, like the eye of a storm. It echoes beneath the newborn cries of a baby which appears, just after midnight, on the cold concrete of a sidewalk, beneath the curls of smoke rising from a woman’s cigarette, beneath the tangle of limbs of two people holding each other in the night.

Some stories simply cannot be told or heard without the creation of a new language with which to tell and hear them. In The Ministry of Utmost Happiness, just as with The God of Small Things, Arundhati Roy has done just that.

3 thoughts on “Top Shelf: The Ministry of Utmost Happiness”