As June approaches, the BookKids team is hard at work, preparing for all things SUMMER—we’re talking the 5 Book Dive Reading Challenge, Camp Half-Blood, author-led storytimes, and more awesome projects to keep our readers busy until school returns. This is an amazing season at BookPeople; the store fills with the sounds of summer, music and laughter, visitors looking for that perfect poolside read and teens fresh out of school, eager to get their hands on their favorite author’s latest release (uh, the new Sarah Dessen, anyone?!). This year is no exception, and we’re thrilled to share an exciting new partnership that truly reflects the passion and creativity in the Austin community—bringing you a super special display and a day full of books, theatre, and prizes to kick off the summer season!

We’ve come together with Zilker Theatre Productions to bring the cast of this year’s epic summer musical, The Wizard of Oz, to BookPeople. We’re already huge fans of the productions at Hillside Theatre—we’ve giggled with Lord Farquaad in Shrek and danced with Corny Collins in Hairspray, to name a couple of faves—so of course we were ecstatic when they announced that this year’s play was the iconic Wizard of Oz. BookPeople is now the official sponsor of one of the performances (July 15) and the cast will be hosting a special storytime and judging an Oz-themed costume contest at our Summer Kickoff Party June 17 (the scoop on this below).

This partnership was the perfect opportunity to display the beautiful editions we sell at the store, plus introduce this timeless classic to a new generation of readers. We have loved building this display and are proud to present to you our very own Emerald City!

We used every green thing we could find to build the skyline — construction paper, paint, glitter, pipe cleaners, green duct tape, the works—, carefully crafted hundreds of red poppies out of tissue paper to line the table, and set down some yellow “brick” to make a long road leading up to the display. And we couldn’t forget a pair of ruby slippers! Our YA Specialist Shannon is a HUGE Oz fan, and she was happy to lend us her own pair for the display. It took over two weeks to get everything together, and it was a true group effort! Below, the kids staff talks a bit about their love for The Wizard of Oz!

Processed with VSCO with f2 preset

“The first time I ever came into contact with The Wizard of Oz was when I was three years old. My mom was doing a production of it for the school she taught drama at, and they were making a film version of The Wizard of Oz. I was recruited to be one of the munchkins and sing, ‘We represent the lollipop guild…’ Then I saw two theatre productions as a child, but I didn’t actually see the film until I was about 10 — and I was blown away by it. I read one or two of the books when I was younger, but it was all about the live theatre performances for me. And along that same vein, when I was in high school I saw The Wiz for the first time and that really cinched it for me.” – Staci 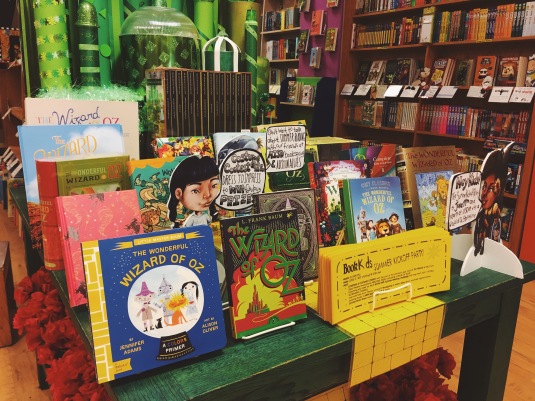 “I never read The Wizard of Oz until I read it aloud to my son when he was six or seven. I’ve seen the movie a zillion times — a zillion times — and I used to know all the words to all the songs. It wasn’t until he was eight or nine, and he came home and asked if I had number two in the series. I had no idea it was a series at the time, so we ended up reading all of them and I love those. But I also like the idea of the little board book. This one is a colors primer. Yellow brick road, red poppy field, tan scarecrow. I really like these, the idea of condensing it down so much that essentially you could read The Wizard of Oz to an 18-month-old.” – Merrilee

“The words of Somewhere Over the Rainbow were my mantra as a kid. I dreamed of a land where imagination took over and good defeated evil. A place where magic didn’t have to come from a wizard and witches weren’t always ugly. Which is why I could quote The Wizard of Oz by the time I could talk, was skipping the Yellow Brick road when I took my first steps, and still always carry a bottle of water in case I need to dispose of any wicked witches. Dorothy’s story helped me find courage to stand against my fears, a heart to love myself and others, and the brains to know when it all mattered. But most of all The Wizard of Oz helped me find a home. A place I could always come back to as if it were my own backyard.” – Shannon

Come visit us and check out our display in person! You can also learn about our Summer Kickoff Party here— there will be a storytime, costume contest, booktalks, and more!

One thought on “Preparing for Summer in BookKids”