Hi, I’m Will! I’m a big reader, of course, and a gamer of the “cut-me-and-I’ll-bleed-pixels” variety. I started gaming early and have been playing for nearly 20 years now. So when a book comes around about the history of video games and the impact they’ve had on our society, that’s something I need in my life! bit by bit: How Video Games Transformed Our World really spoke to me–it delves into history and video games in an appreciable manner and treats the subject matter with interest, respect, and an eye towards the unique qualities that exist only in games. 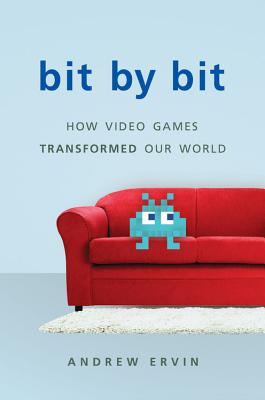 Even though Andrew Ervin doesn’t really consider himself a gamer, since he grew up just as video games were starting to really develop aesthetically, you can tell from the get-go that he’s curious and dedicated to knowing about this world. For research, Ervin looked back and compiled a list of what he considered to be seminal works in the history of games, then played them. All of them.  While any list that has to pare down such extensive offerings will be largely subjective, I feel like Ervin struck a good balance by choosing games that were important—such as World of Warcraft (for creating not only a massive game, but a truly unique social experience; they’ve even created a cookbook to help you make game-based feasts to share with your WoW friends!)—but not exactly beaten to death—like Adventure! an early Atari game in which your character is a square and the dragons look like ducks, but so worth it. There are a few, like Mass Effect, Skyrim, and (of course) Pokemon that I feel are hugely influential and was sad to see didn’t make Ervin’s list, but I feel like the spirit and intent of his list is in the right place.

Ervin approached his list as a man of literature, and focuses mostly on games that have a story, something to build from—and there are quite a lot. Between this focus on plot and personal issues, FPS(first person shooters) are generally not within Ervin’s comfort zone, and outside of a couple big names like Halo or Call of Duty, tend not to populate his list. I didn’t mind–I feel similarly drawn to story and character development in games, which is why I wish he might have split the difference and gone for Mass Effect (a story based shooter set in space that plays heavily on player agency in determining plot development), but the sheer size of Mass Effect’s world could be a little daunting for research purposes.

I really appreciated Ervin’s chapters on people who’ve made huge impacts in the gaming industry, in particular Tim Schafer (the mind behind Psychonauts, Brutal Legend, Grim Fandango, and established Double Fine Productions) and Shigeru Miyamoto (designer on basically every beloved Nintendo game franchise ever: Donkey Kong, Mario, Legend of Zelda. He even worked on some early Pokemon games).  I love Schafer’s games and Miyamoto’s resume has some of the biggest and best on it, so reading about Ervin playing through their games was incredibly fun—like watching your friend’s first-time discovery of something you really enjoy. Gamers get to live many lives, and I firmly believe playing through games created by people like Shafer and Miyamoto, who put such thought and care into the design of their games, are lives well spent.

Ervin also points the spotlight on pioneering women in gaming history. Game design (and game fandom) is a field that tends to be dominated by men, so I really appreciate that he took some time to attribute these contributions and note the accomplishments of women like Dona Bailey, co-creator of the very familiar and popular game Centipede, and Carol Shaw who was the designer behind one of Activision’s first huge hits, River Raid. Not just male-dominated, the video game industry has a tendency to be less than welcoming to women, as Ervin references, touching on some recent examples such as the response and harassment of media critic and blogger Anita Sarkeesian and the GamerGate issues that rocked the world of videogame journalism.

Overall bit by bit is a great examination of the history of video games and the important role they’ve had in the lives of millions, they way they regularly defy convention and definition, and the way (regardless of the critics who vehemently argue and debate) video games are considered Art. Andrew Ervin comes across as a researcher genuinely interested in how games come about, and it’s a good, fun, comprehensive read following his discoveries from the very beginning with Tennis for Two, to today’s Minecraft which has captured an entire new generation with neo-retro charm and creativity.

— review by Will Bason, part-time bookseller