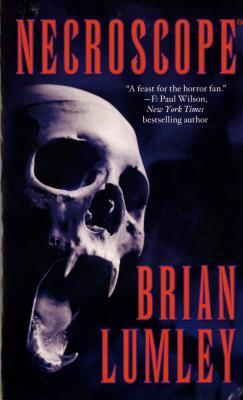 In this time of terror and monsters, the impermanence of the human body with all its casual indignities and inherent shortcomings must come as a bittersweet salve to our wounded psyches. Despite our fundamental differences, we are all equals to the worms under our inevitable grave dirt. The dead, they say, shed all pretension in the lonesome nothing of the afterlife. There are those, however, with the ability to communicate with the ghastly echoes of the damned – those that would give of themselves to calm the restless spirits of the departed. These are the haunted minds of The Nightmare Factory Book Club, willing windows to the phantasmic plane. Join us this very evening to commune with wraiths of the past and learn of their appreciation for the pulp horror tradition and Necroscope by Brian Lumley.

Necroscope is more than just another psychic, Cold War, paranormal, espionage, ghost vampire, esoteric physics thriller. It’s also the story of two gifted boys, separated by arbitrary political boundaries, coming to terms with their powers. One is blinded by ambition, and the other is clouded by apprehension and existential uncertainty. Where their abilities overlap, they must duel for the favor of the undead. Necroscope is perhaps the most vibrant and lasting instantiation of its specific, literary zeitgeist, so join us tonight to dance in the gore and viscera raining still from the typewriters of the ’80s.

The Nightmare Factory Book Club meets on the third Tuesday of every month to discuss horror fiction in all of its glorious iterations. Tonight at 7:00 p.m. in the cafe at BookPeople we examine the hidden depths of Brian Lumley’s longstanding classic of the genre Necroscope. Be there tonight or regret it for eternity.