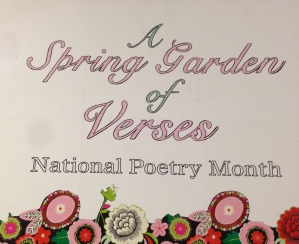 When most people think of poetry for kids, Shel Silverstein often comes to mind, and rightly so since his poems are a silly and delightful right-of-passage for any child. April, being National Poetry Month, offers the perfect time to take a look at the variety and scope of poetry for children beyond the Silverstein collections. We’ll be taking a look at rhymes, meter, and novels in verse. Today, in our last Poetry Month entry, we take a look at novels (and one biography) in verse, which are great options for older chapter book and teen-aged readers.

Novels in verse are interesting. They aren’t as verbose as those ancient epic poems we all had to read in high school, but they do tell a story, more than a “normal” poem typically does. They are tempting to read very fast since there are fewer words on the page than a novel, but reading fast would sacrifice the intentional flow and rhythm created by the author. In the case of the 2015 Newbery Medal winner, The Crossover by Kwame Alexander, the rhythm is critical to the poems – some are rapid and frenzied just like the action of a basketball game, and others are slower and somber. Even though The Crossover, and other novels in verse, is made up of many poems, they all work together to tell one story, which makes novels in verse so interesting for a reader – even readers who claim to eschew poetry.

Novels in verse also seem to attract a more diverse and varied group of authors and subjects. Why is this? Maybe it is because it is a format that is less intimidating than others, especially when topics are difficult such as genocide, racial inequality, immigration, war, physical disability, the death of a parent, and other social and historical issues. The format lends itself to more use of figurative language, and can be more suggestive than concrete. The reader must interpret the meaning. The format can soften the blow, so to speak, and introduce young readers to these difficult topics in an age appropriate and approachable way. The emotional element, though, is always high. Poetry, using fewer words, but well-chosen ones, frequently has great emotional power.

Here are some excerpts from novels in verse that we love.

Love That Dog by Sharon Creech

The Crossover by Kwame Alexander

My hand
and my twig
and my sparrow
make the lines.

My hand
and my twig
and my sparrow
do the dance on the sand.

I never know
what my hand
and my twig
and my sparrow
will create.

My hand
holds my twig.

But my twig goes
on its own.

My sparrow — that’s what’s inside me:

Inside Out and Back Again Thanhha Lai

“Wet and Crying”
My biggest papaya
is light yellow,
still flecked with green.

Brother Vu wants
to cut it down,
saying it’s better than
letting the Communists have it.

Mother says yellow papaya
tastes lovely
dipped in chili salt.
You children should eat
fresh fruit
while you can.

Black seeds spill
like clusters of eyes
wet and crying.

Red Butterfly by A. L. Sonnichsen

“Bury”
My fear
of upsetting
quiet
gentle
Mama
makes me
wrap up my
questions
like spoiled meat
in butcher paper
and bury them so deep,
so long,
I can almost forget they’re there.

“what everybody knows now”*
Even though the laws have changed
my grandmother still takes us
to the back of the bus when we go downtown
in the rain. It’s easier, my grandmother says,
than having while folks look at me like I’m dirt.

But we aren’t dirt. We are people
paying the same fare as other people.
When I say this to my grandmother,
she nods, says, Easier to stay where you belong.

I look around and see the ones
who walk straight to the back. See
the ones who take a seat up front, daring
anyone to make them move. And know
this is who I want to be. Not scared
like that. Brave
like that.

Silver People: Voices from the Panama Canal by Margarita Engle

Mateo
“The Voyage from Cuba”
Hunger at sea for three days
feels like a knife in the flesh —
twisted blade, rusty metal,
the piercing tip of a long
sharp-edged
dagger
called regret.

But there’s no turning back,
and with no food on board,
hunger haunts me
until we finally reach
the slick, wet Panama docks,
where dozens of other ships
are all unloading their fuming,
angry,
hungry
human cargo
in thunderous rain.

A Time to Dance by Padma Venkatraman

“My Way to Pray”
At home, bowing to my dancing Shiva,
I say silently
the words of the prayer Govinda taught me.
My hands are lips.
My body is voice.

As I shape the words
“the entire universe is His body”
an invisible hand flicks on the switch I’ve been fumbling with.

In my mind’s eye, I see my students.
See the strength, the weakness, the curve of each back,
the slope of each shoulder.
Elbows with a natural bend.
Upper bodies that jut out too far forward
as though they’re trying to race ahead of the feet.
No body perfect.
No two children the same size or shape.
But every dancing child a manifestation
of Shiva in human form.