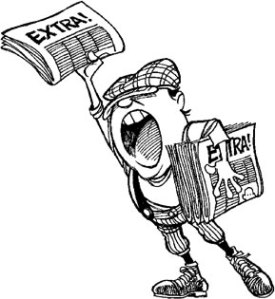 A first edition of Charles Darwin’s On the Origin of the Species has been sold for an amazing 26,000 pounds (approximately 40,000 dollars).

Author Jhumpa Lahiri has won the DSC Award for South Asian fiction for her recent novel, The Lowland. DSC judge Keki N Daruwalla described The Lowland as “a superb novel written in restrained prose with moments of true lyricism” written “by a writer at the height of her powers”.

The longlist for the 2015 International Prize for Arabic Fiction was released on January 12th, and includes five women writers out of a total of sixteen. With the exception of 2011, there have been an average of only one or two women writers on the list in previous years.

Salman Rushie will release a new novel this fall, entitled Two Years Eight Months and Twenty-Eight Nights. Random House has stated that the new novel “blends history, mythology, and a timeless love story to bring alive a world…that has been plunged into an age of unreason.”

The bestselling self-help book, The Secret, by Rhonda Byrne, will be made into a major motion picture, to be directed by Raja Gosnell.

The beloved book Alice’s Adventures in Wonderland, by Lewis Carroll,  turns 150 this year, and will be the focus of a special exhibit at the Harry Ransom Center here in Austin, as well as a book by the University of Texas Press featuring photography by Lewis Carroll.

And sadly, the book multiverse lost two luminaries this week:

Australian writer Colleen McCullough, author of the 1977 bestseller The Thorn Birds, died on January 29th. She was 77 years old.

Songwriter and poet Rod McKuen also passed away this week at the age of 81. McKuen is the author of more than three dozen poetry and essay collections.

Stay tuned for more news from the book multiverse, right here on the BookPeople blog. Have a great week, BookPeople Nation!

View all posts by Sutterfield

5 thoughts on “News from the Book Multiverse”