Where we bring you YA news from around the globe and highlights from the
BookPeople Teen Press Corps! 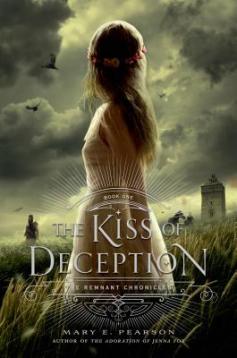 WHAT THE TEEN PRESS CORPS IS SAYING:

“I enjoyed reading this novel immensely. It reminded me a lot of The Demon King series by Cinda Williams Chima. I love the trend of the daughters holding more responsibility than the sons in kingdoms, or, in The Demon King, a queendom. Another thing I loved about this novel was that it didn’t have the same old love triangle that has become very popular; Lia shows interest in one guy almost exclusively.”

In a society steeped in tradition, Princess Lia’s life follows a preordained course. As First Daughter, she is expected to have the revered gift of sight—but she doesn’t—and she knows her parents are perpetrating a sham when they arrange her marriage to secure an alliance with a neighboring kingdom—to a prince she has never met.

On the morning of her wedding, Lia flees to a distant village. She settles into a new life, hopeful when two mysterious and handsome strangers arrive—and unaware that one is the jilted prince and the other an assassin sent to kill her. Deception abounds, and Lia finds herself on the brink of unlocking perilous secrets—even as she finds herself falling in love.

The Kiss of Deception is the first book in Mary E. Pearson’s Remnant Chronicles.

More about the Buzz Book.

Growing Up and Other Natural Disasters panel will feature amazing authors Andrew Smith (100 Sideways Miles), Jennifer Mathieu (The Truth About Alice), Julie Murphy (Side Effects May Vary), and Jandy Nelson (I’ll Give You the Sun)!

Super psyched for this really fantastic group of authors who will participate on the Is This the Real Life? panel – Leslye Walton (The Strange and Beautiful Sorrows of Ava Lavender), A.S. King (Glory O’Brien’s History of the Future), Scott Westerfeld (Afterworlds), Guadalupe Garcia McCall (Summer of the Mariposas), and Cory Doctorow (In Real Life)!

Review of the Week!

Xander reviews Illusive by Emily Lloyd-Jones. Here’s an excerpt: “In a fast, fun ride, Emily Lloyd-Jones’ debut is a great take on crime and superpowers. Illusive was a wonderful book. I wasn’t exactly sure what to expect, but I am so glad I read it. The idea and plot of this book are great; a bit reminiscent of The Incredibles, but completely different other than superpowers. I love that the characters in this book are using their powers to commit crimes instead of keeping them hidden—they are being hunted by the feds, but it’s almost like they could care less. They are having fun.”

BookPeople and Teen Press Corps in the news!

We are so proud of the TPC and that they were mentioned in book selling & publishing news outlets twice this week! Great work everyone.

YA buyer Meghan is quoted and TPC is mentioned in this article by Publishers Weekly! The article addresses the increasingly blurry lines between middle grade and YA books and how bookstores are responding. The article definitely illustrates that there are many ways to approach this but that the shared goal is to make sure that a reader gets the book they want. Anyone out there have an opinion to share about this? Let us know in the comments.

TPC and the store display for This Star Won’t Go Out are pictured and credited for the marketing idea for Esther Day. So cool!

Author Lois Lowry talks about bringing her fantastic novel The Giver to the big screen, how she was able to contribute to the production, and her amazing career writing for children.

The film adaption of Paper Towns by John Green has a release date! The movie is scheduled to come out July 31, 2015. Also mentioned in the same article is the release date for Tim Burton’s adaption of Ransom Riggs’s book Miss Peregrine’s Home for Peculiar Children, which will be called Peregrine’s Home for Peculiars. The film is just underway and has a scheduled release of March 4, 2016, so we have a bit of a wait for this one. And finally, if you haven’t read The Martian by Andy Weir, Ellen & Raul recommend it. Matt Damon is in the movie adaptation of this cool book and it will be released November 25, 2015.

And finally, here’s something fun. Authors were asked to put a virtual Hogwarts Sorting Hat on characters from their own books. John Green, Holly Black, Gayle Foreman, and others gamely took part. Which houses do you think Hazel and Augustus landed in? Take a look!