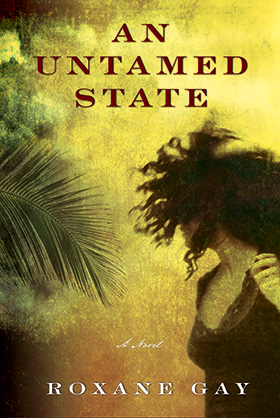 Sometimes there are occurrences in our lives that leave such an impact on us, we are forever changed by them. A big metaphorical wooden fence dividing what we were before it happened, and what we became after. The amount we are affected varies based on the event, but nonetheless we are changed. This idea has always been interesting to me and in Roxane Gay’s debut novel, An Untamed State, she has written one of the most compelling stories about the before and after of an event that I have ever read.

An Untamed State is the story of main character Mireille Duval Jameson’s horrific kidnapping. Mireille is visiting her family in Haiti with her husband and young son when she is suddenly captured by a group of men in broad daylight. We are given no back story before this moment. We are thrown as quickly as she is into the most horrific moment in her life, and it is brutal. Mireille is the daughter of one of the richest men in Haiti and has wanted for little in her life. This privilege has afforded her certain things, certainly, but she is also a smart, stubborn, and an incredibly strong woman. It is her strength that drives this novel. Mireille’s journey from hostage to freedom makes for one of the most suspenseful and powerful novels I have ever read. However, it is the second half of the book, once Mireille has regained her freedom, that truly left me in awe. Following her seemingly insurmountable task to regain some sense of self is equally, if not more, enthralling as reading about her struggles while in captivity.

Because of the subject matter, this book is hard to read. It is also impossible to put down. The pairing of these two things speaks highly of Gay’s masterful writing. There was hardly a moment while reading this that my stomach wasn’t in a knot. I also finished it in one night. The subject matter is painful, yes, but it is also important. It forces the reader to take a look at what it means to them to be free, privileged, safe, and how quickly those ideas can be changed. Roxane Gay’s writing doesn’t cut corners. It doesn’t let us look away. It reminds us that sometimes there are things in our lives that leave us broken, but that we can still exist alongside them.

Roxanne Gay will be here at BookPeople on Monday, May 19 at 7PM speaking & signing copies of An Untamed State. Don’t miss it!

View all posts by arianbp