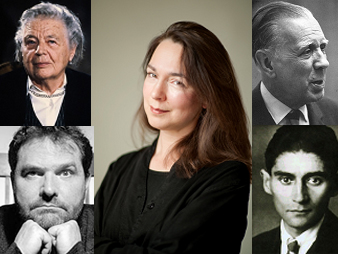 Snap: Beat Poet Enthusiast and co-founder of City Light Books & Publishing Lawrence Ferlinghetti has sold his travel journals to Liveright Publishing. With plans to release in the fall of 2015, the journals show the more political side of Ferlinghetti and his encounters with such poets and movement leaders as Pablo Neruda, Ezra Pound, Ernesto Cardenal, Yevgeny Yevtushenko and Andrei Voznesensky.

“Killing Conservative Books”: BuzzFeed has a piece on the decline of the buzz surrounding book deals for politically conservative titles. “It’s become a kind of blood sport and the most ruthless gladiator comes out on top,” said Adam Bellow, who runs Harper Collins’ conservative imprint, Broadside.

Decision Made: A judge ruled in HarperCollins’ favor in a suit over e-book publishing rights. HarperCollins vs. Open Road concerned the e-book of Jean Craighead George’s bestselling Julie of the Wolves. George, who signed the contract with HarperCollins in 1973, believed she held the rights to the e-book and made the deal with Open Road prior to her death in 2012. “The result of such broad language in older contracts, [James] Grimmelmann, [Maryland law professor and PW contributing editor], concludes, will continue to make digital licensing a messy proposition.”

Read It Again, Sam: Random House’s imprint Vintage Books launched its plan to release backlist titles that were used as inspiration for movie adaptations. They’ll start this spring with titles like Showboat, and with future release date plans for other titles like The Bad Seed and The Ghost & Mrs. Muir.

The Let Books Be Books campaign is gaining more support. The campaign is protesting the gender marketing of children’s books as either “for girls” or “for boys.” British authors and booksellers are coming around in support of the petition including Malorie Blackman (UK’s Children’s Laureate), Carol Ann Duffy (UK’s Poet Laureate), and Phillip Pullman (His Dark Materials trilogy).

Lost in Fairy-tale Translation: Sofia Coppola has signed on to direct a live-action version of Hans Christian Andersen’s The Little Mermaid. This will be the first time the director makes a movie geared towards children.

Timeless But Not Quite Of Their Time: Mental Floss put together a list of some really harsh critiques of now famous authors/novels. No one was safe, it seems, from negative criticism in their day including: F. Scott Fitzgerald, Ernest Hemingway (his own mother hated his book!), Norman Mailer, and Jack Kerouac to name a few.

Publisher’s Weekly continues their series of “Perfect Sentences.” Included in the list is this little gem from “Paris” by Lorrie Moore: “And so, to have accidentally caught their desire, swimming across the current of it like that, passing through, I feel loved, in a warm and random way, wandering through it as if it were a rainbow, that old trick of light, or a place in a pool where someone has peed.”

One thought on “Book World Buzz”