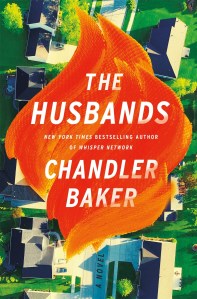 The Husbands by Chandler Baker

A GOOD MORNING AMERICA BOOK CLUB PICK
“Chandler Baker, queen of the feminist thriller, has delivered once again! The Husbands is a poignant exploration of what it would take for women to have it all.” —Sally Hepworth, bestselling author of The Good Sister

To what lengths will a woman go for a little more help from her husband?
Nora Spangler is a successful attorney but when it comes to domestic life, she packs the lunches, schedules the doctor appointments, knows where the extra paper towel rolls are, and designs and orders the holiday cards. Her husband works hard, too… but why does it seem like she is always working so much harder?

When the Spanglers go house hunting in Dynasty Ranch, an exclusive suburban neighborhood, Nora meets a group of high-powered women—a tech CEO, a neurosurgeon, an award-winning therapist, a bestselling author—with enviably supportive husbands. When she agrees to help with a resident’s wrongful death case, she is pulled into the lives of the women there. She finds the air is different in Dynasty Ranch. The women aren’t hanging on by a thread.

But as the case unravels, Nora uncovers a plot that may explain the secret to having-it-all. One that’s worth killing for. Calling to mind a Stepford Wives gender-swap, New York Times bestselling author of Whisper Network Chandler Baker’s The Husbands imagines a world where the burden of the “second shift” is equally shared—and what it may take to get there. 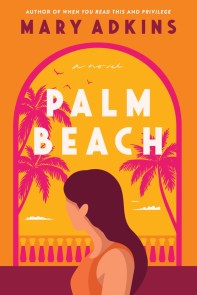 A thought-provoking page-turner from the author of When You Read This and Privilege that captures the painful divide between the haves and have-nots and the seductive lure of the American dream.

Living in a tiny Queens apartment, Rebecca and her husband Mickey typify struggling, 30-something New Yorkers—he’s an actor, and she’s a freelance journalist. But after the arrival of their baby son, the couple decides to pack up and head for sunny, comfortable Palm Beach, where Mickey’s been offered a sweet deal managing the household of a multimillionaire Democratic donor.

Once there, he quickly doubles his salary by going to work for a billionaire: venture capitalist Cecil Stone. Rebecca, a writer whose beat is economic inequality, is initially horrified: she pillories men like Stone, a ruthless businessman famous for crushing local newspapers. So no one is more surprised than her when she accepts a job working for Cecil’s wife as a ghostwriter, thinking of the excellent pay and the rare, inside look at this famous Forbes-list family. What she doesn’t expect is that she’ll grow close to the Stones, or become a regular at their high-powered dinners. And when a medical crisis hits, it’s the Stones who come to their rescue, using their power, influence, and wealth to avert catastrophe.

As she and Mickey are both pulled deeper into this topsy-turvy household, they become increasingly dependent on their problematic benefactors. Then when she discovers a shocking secret about the Stones, Rebecca will have to decide: how many compromises can one couple make?

From the acclaimed author of Taipei, a bold portrait of a writer working to balance all his lives–artist, son, loner–as he spins the ordinary into something monumental. An engrossing, hopeful novel about life, fiction, and where the two blur together.

In 2014, a novelist named Li leaves Manhattan to visit his parents in Taipei for ten weeks. He doesn’t know it yet, but his life will begin to deepen and complexify on this trip. As he flies between these two worlds–year by year, over four years–he will flit in and out of optimism, despair, loneliness, sanity, bouts of chronic pain, and drafts of a new book. He will incite and temper arguments, uncover secrets about nature and history, and try to understand how to live a meaningful life as an artist and a son. But how to fit these pieces of his life together? Where to begin? Or should he leave society altogether?

Exploring everyday events and scenes–waiting rooms, dog walks, family meals–while investigatively venturing to the edges of society, where culture dissolves into mystery, Lin shows what it is to write a novel in real time. Illuminating and deeply felt, as it builds toward a stunning, if unexpected, romance, Leave Society is a masterly story about life and art at the end of history. 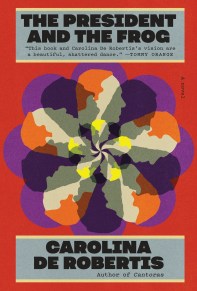 The President and the Frog by Carolina De Robertis

An incandescent novel–political, mystical, timely, and heartening–about the power of memory, and the pursuit of justice, from the acclaimed author of Cantoras.“A joy to read. Playful and profound, unearthly yet deeply rooted, this sublime and gripping novel is above all about hope: that within the world’s messy pain there is still room for transformation and healing.”–Madeline Miller, New York Times bestselling author of Circe

At his modest home on the edge of town, the former president of an unnamed Latin American country receives a journalist in his famed gardens to discuss his legacy and the dire circumstances that threaten democracy around the globe. Once known as the Poorest President in the World, his reputation is the stuff of myth: a former guerilla who was jailed for inciting revolution before becoming the face of justice, human rights, and selflessness for his nation. Now, as he talks to the journalist, he wonders if he should reveal the strange secret of his imprisonment: while held in brutal solitary confinement, he survived, in part, by discussing revolution, the quest for dignity, and what it means to love a country, with the only creature who ever spoke back–a loud-mouth frog.

As engrossing as it is innovative, vivid, moving, and full of wit and humor, The President and the Frog explores the resilience of the human spirit and what is possible when danger looms. Ferrying us between a grim jail cell and the president’s lush gardens, the tale reaches beyond all borders and invites us to reimagine what it means to lead, to dare, and to dream.

Afterparties: Stories by Anthony Veasna So

A vibrant story collection about Cambodian-American life—immersive and comic, yet unsparing—that offers profound insight into the intimacy of queer and immigrant communities

Seamlessly transitioning between the absurd and the tenderhearted, balancing acerbic humor with sharp emotional depth, Afterparties offers an expansive portrait of the lives of Cambodian-Americans. As the children of refugees carve out radical new paths for themselves in California, they shoulder the inherited weight of the Khmer Rouge genocide and grapple with the complexities of race, sexuality, friendship, and family.

A high school badminton coach and failing grocery store owner tries to relive his glory days by beating a rising star teenage player. Two drunken brothers attend a wedding afterparty and hatch a plan to expose their shady uncle’s snubbing of the bride and groom. A queer love affair sparks between an older tech entrepreneur trying to launch a “safe space” app and a disillusioned young teacher obsessed with Moby-Dick. And in the sweeping final story, a nine-year-old child learns that his mother survived a racist school shooter.

The stories in Afterparties, “powered by So’s skill with the telling detail, are like beams of wry, affectionate light, falling from different directions on a complicated, struggling, beloved American community” (George Saunders). 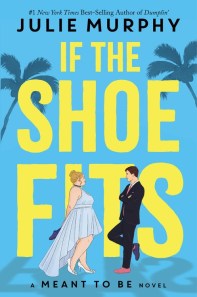 If the Shoe Fits by Julie Murphy

“If the Shoe Fits encompasses everything I love about rom-coms. I laughed, I swooned, I smiled. Another hit for Julie Murphy!”
—Colleen Hoover, #1 New York Times best-selling author of Hopeless

If the shoe doesn’t fit, maybe it’s time to design your own.

Cindy loves shoes. A well-placed bow or a chic stacked heel is her form of self-expression. As a fashion-obsessed plus-size woman, she can never find designer clothes that work on her body, but a special pair of shoes always fits just right.

With a shiny new design degree but no job in sight, Cindy moves back in with her stepmother, Erica Tremaine, the executive producer of the world’s biggest dating reality show. When a contestant on Before Midnight bows out at the last minute, Cindy is thrust into the spotlight. Showcasing her killer shoe collection on network TV seems like a great way to jump-start her career. And, while she’s at it, why not go on a few lavish dates with an eligible suitor?

But being the first and only plus-size contestant on Before Midnight turns her into a viral sensation—and a body-positivity icon—overnight. Even harder to believe? She can actually see herself falling for this Prince Charming. To make it to the end, despite the fans, the haters, and a house full of fellow contestants she’s not sure she can trust, Cindy will have to take a leap of faith and hope her heels— and her heart—don’t break in the process.

Best-selling author Julie Murphy’s reimagining of a beloved fairy tale is an enchanting story of self-love and believing in the happy ending each and every one of us deserves.

A new novel by PEN/Faulkner Award winner Azareen Van der Vliet Oloomi, “written with the intensity of early Marguerite Duras and Ferrante’s Days of Abandonment,” about a young woman caught in an affair with a much older man, a personal and political exploration of desire, power, and human connection (The Millions).

It’s summer when Arezu, an Iranian American teenager, goes to Spain to meet her estranged father at an apartment he owns there. He never shows up, instead sending her a weekly allowance, care of his step-nephew, Omar, a forty-year-old Lebanese man. As the weeks progress, Arezu is drawn into a mercurial, charged, and ultimately catastrophic affair with Omar, a relationship that shatters her just at the cusp of adulthood.

Two decades later, Arezu inherits the apartment. She returns with her best friend, Ellie, an Israeli-American scholar devoted to the Palestinian cause, to excavate the place and finally put to words a trauma she’s long held in silence. Together, she and Ellie catalog the questions of agency, sexuality, displacement, and erasure that surface as Arezu confronts the ghosts of that summer, crafting between them a story that spans continents and centuries.

Equal parts Marguerite Duras and Shirley Jackson, Rachel Cusk and Samanta Schweblin, Savage Tongues is a compulsive, unsettling, and bravely observed exploration of violence and eroticism, haunting and healing, and the profound intimacy born of the deepest pain.

Once There Were Wolves by Charlotte McConaghy

From the author of the beloved national bestseller Migrations, a pulse-pounding new novel set in the wild Scottish Highlands.

Inti Flynn arrives in Scotland with her twin sister, Aggie, to lead a team of biologists tasked with reintroducing fourteen gray wolves into the remote Highlands. She hopes to heal not only the dying landscape, but Aggie, too, unmade by the terrible secrets that drove the sisters out of Alaska.

Inti is not the woman she once was, either, changed by the harm she’s witnessed—inflicted by humans on both the wild and each other. Yet as the wolves surprise everyone by thriving, Inti begins to let her guard down, even opening herself up to the possibility of love. But when a farmer is found dead, Inti knows where the town will lay blame. Unable to accept her wolves could be responsible, Inti makes a reckless decision to protect them. But if the wolves didn’t make the kill, then who did? And what will Inti do when the man she is falling for seems to be the prime suspect?

Propulsive and spell-binding, Charlotte McConaghy’s Once There Were Wolves is the unforgettable story of a woman desperate to save the creatures she loves—if she isn’t consumed by a wild that was once her refuge.

His Only Wife by Peace Adzo Medie

After the Last Border by Jessica Goudeau

View all posts by bookpeople