Fall is finally here! Now that the temperature is finally going to dip below 90, our booksellers would like to share their tried and true recipe for the perfect fall day: a cozy sweater, a hot cup of tea, and a brand new book to read! Check out the page below to see what has captured their attention this week. 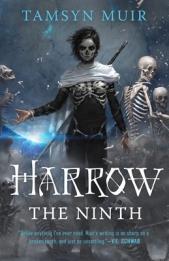 Harrow the Ninth by Tamsyn Muir

Death in Her Hands by Ottessa Moshfegh

Our protagonist in Death in Her Hands is a widowed woman in her 70s who has moved to an isolated town to live a quiet rest of her days. One day while on a walk with her dog she stumbles across a note, stating that a woman is dead and the writer of the note did not kill her. A discovery that most people would turn into the authorities instead becomes an obsession to the point where her life becomes so based around this note that her reality begins to form into false assumptions and accusations and runs her entire life. Moshfegh once again creates a character that originally feels relatable then forms into a creature you hope you wouldn’t turn into, but can’t guarantee you wouldn’t in their shoes.

The gut wrenching and strange trials of Eli Bell’s approach to “a dead blue wren” accelerated to the point that i was reading breathlessly for the last third, shaking sweat off my brow in headshakes of denial. Boy Swallows Universe is the reason we write stories that are not just like life. Sometimes its nice to see poetic justice, and here it is served up with just a touch of Murikami-esque irreality. Loved it!