Our Bookseller Pirates share the stories behind their tattoos, inspired by Isaac Fitzgerald’s upcoming How to Be a Pirate! Check out Part 1 here. 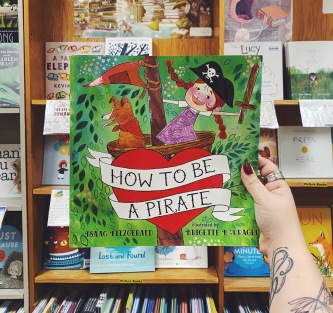 Picture book author Isaac Fitzgerald will be here March 5th to read us his delightful tale of a girl who desperately wants to be a pirate and turns to her tattooed grandfather (because all tattooed people are pirates, of course!) to learn Pirate Stuff 101. CeCe learns she must be independent, fun, brave, and quick! And of course, she can’t forget to LOVE. In How to Be a Pirate, Fitzgerald celebrates the power of storytelling, family bonds, and the encouragement and confidence we can give each other. Inspired by CeCe’s Grandpa, we asked some of our booksellers to share the stories behind their own tattoos… turns out they all have something in common: family.

Emily from our café shared the stories behind two of her many tattoos! Her first tattoo was a cat designed by her sister Jac– who happens to work in our Gifts department!– that she got when she was 18.

Processed with VSCO with f1 preset

Processed with VSCO with f1 preset

She does have one regret, the Japanese characters inside the cat design. When people ask her what it means, she’ll jokingly say, “It’s Japanese for MEOW!” She does love having her sister’s touch on her artwork. Like many of us, Emily has a disapproving mother who does NOT like tattoos. Every time Emily would come home with a new tattoo, her mother would ask, “ANOTHER one?” Until one day, Emily surprised her with a classic heart in her honor. Her mom was… sort of okay with it.

Eugenia recently got a matching tattoo with her sister: a corn graces her arm, in honor of her home, México, and one of her favorite foods. “Every time I go back home, I drop my bags, and the first thing I do is go get elote with my sister. It’s one of the things I miss the most. I know many restaurants try to do the street corn thing in the US, but it’s… ah… not the same.”

Her favorite corn is cacahuazintle, which is only in season for a certain part of the year– and it wouldn’t be an exaggeration to say she bases her yearly México visits around the availability of cacahuazintle…

Our new General Manager Charley also got matching tattoos with her sister! They

couldn’t agree on one thing– hey, three people deciding on ANYTHING is pretty impressive– so they went with the ultimate symbol of unity: three rings around their arms. Charley had to shout-out Sisters by Daisy Johnson, which comes out in August from Riverhead.

Rachel M. has multiple family inspired tattoos on her arm. This is someone who up until a few years ago, NEVER thought she’d ever get a tattoo! But after a death in the family, she and her husband realized body art could be a beautiful representation of the important things in life. She has a heart on her sleeve based on the number 2, representing her children, and a lowercase ‘g’ after her husband. She was also inspired after watching the process of a caterpillar transform into a butterfly. “It hit me: you have everything you need inside you to transform to beauty. And once you transform… why would you ever go back?” Finally, she has a small number 13 in Hebrew, after her wedding anniversary.

Thank you to CeCe’s Grandpa for inspiring us to share our stories. We can’t wait to host Isaac Fitzgerald on March 5th. We hope you’ll join us at the event– we’ll have pirates booty waiting!