Local author Mari Mancusi ran one of the most successful pre-order campaigns we’ve seen for the release of her new middle grade novel, The Camelot Code: The Once and Future Geek. We were inspired by her amazing efforts and asked her a few of our most burning questions! Check out the Q&A below and mark your calendars: Mari will be here Saturday, Dec. 1st at 2 pm for a talk and signing! 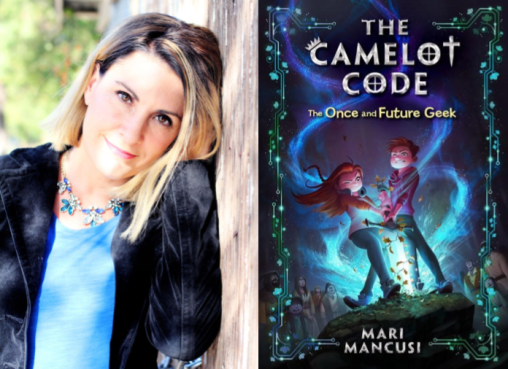 BookPeople: You’ve run one of the most successful local pre-order campaigns we’ve seen! Congratulations! Can you tell us a little bit about your book and your history as a local author in Austin?

Mari Mancusi: Thank you! I’m really excited about The Camelot Code and its release. The story is a bit of a kids’ version of the old Mark Twain novel, A Connecticut Yankee in King Arthur’s Court, where a young Arthur, before he pulls the sword from the stone, accidentally time travels to modern day. While there, he Googles himself and learns of his destiny (and his not so happily ever after) and decides he’d rather stay and join the football team instead. Now it’s up to our 21st century gamer geeks, Stu and Sophie, with the help of an RPG video game-loving Merlin, to pull the sword from the stone and get history back on track or the world as they know it, not to mention the existence of pepperoni pizza, will be gone forever.

I came to Austin nine years ago and immediately fell in love with the writing community here. We have a treasure trove of local authors who are all so creative and talented and supportive of one another. Moving here was like coming home to an instant family. Also, we have the best librarians in Texas who are legit superheroes, in my opinion, working tirelessly to get books into kids’ hands. And, of course, we have BookPeople—an incredible indie bookstore that gives such wonderful support to local authors. It’s basically the writer’s trifecta!

BP: We heard that your pre-order campaign was inspired by Beto O’Rourke’s campaign. Tell us more!

MM: Beto’s motto was “people not PACs” which really spoke to me as an author who has traditionally relied on solely on her publisher to get her books into kids’ hands. But I loved the idea of going one step further, attempting a true grassroots campaign. Of traveling around Texas, meeting people face to face, sharing stories and connecting on a more personal level. Whether you agree with Beto’s politics or not, you have to admire the effort he made to personally connect with voters and, in turn, have them go out and share their excitement with others. I thought, why couldn’t an author do the same—but with readers? And so I vowed to spend a couple months before my book release going out into the community as much as I could. Meeting and connecting with kids, parents, teachers, librarians, and booksellers. Sharing the story of the book itself and allowing them to get to know the person behind the plotline.

BP: What were some of your tactics for engaging with the community? You’ve mentioned you went door to door talking to neighbors, as well as tabling/canvassing for pre-orders at conventions– care to elaborate?

MM: I didn’t exactly block walk, but I did the next best thing. First, I went on my neighborhood’s Facebook page on Small Business Tuesday and offered a pre-order deal for my book. Buy a book and I would deliver that book, along with a pre-order gift (a light-up Minecraft sword or a handmade sword in the stone necklace) to your front door on release day, personally signed to your child.

I think this worked on two levels. One, the convenience factor. People want to support you, but they’re busy, distracted. Most are probably not going to go out of their way to drive to a bookstore to get your book—even if they have the best intentions. But offer home delivery—a sort of one-author book uber? Well, that’s an easy sell. All they had to do was reply to my post. And the more replies? The more FB showed the post. And the more people started getting excited about the book. The buzz began to spread around the neighborhood. People started posting pictures of their kids with the pre-order gifts or the mini posters I gave out. And suddenly their friends wanted to know how THEY could get a book. And so on.

Another thing I think helped was that I didn’t just post the cover and summary of the book in the original Facebook post. I put a picture of me, smiling at the Disney booth at a librarian conference. And I put another of my seven year old daughter, pulling the aforementioned pre-order sword from the stone. This helped personalize the campaign, I think, much like Beto personalized his campaign with things like What-a-Burger drive through runs or skateboarding through parking lots. There was now a face behind the book. A neighbor, a mother, a real person not unlike themselves. Someone they connected with on a deeper level and wanted to support.

To compliment this neighborhood campaign, I also set up a lot of school visits, offering them for free if the teacher would agree to collect a certain amount of book pre-orders. (Usually 50.) While some schools don’t have the budget to bring in authors, most have no problem sending out book order forms. And while doing school visits to support a book isn’t a novel idea in and of itself, doing them BEFORE the book comes out—and getting pre-orders is. Of course it requires a trip back to the school once the book is out to deliver the signed books, but that’s a small price to pay for literally hundreds of extra sales during that all important release week. After all, you can only visit so many schools during the actual on-sale week. But if you start a couple months ahead? You have all the time in the world to rack up those sales.

And schools were just the beginning. I also drove all around Texas to attend various regional librarian conferences to meet librarians and teachers face-to-face. I “speed dated” with indie booksellers at the Mountains and Plains Fall Discovery Show. And I attended local librarian events like Pflugerville Comic Con and Northside’s Nerdvana Con in San Antonio where I could interact with my core audience—kids and parents—one-on-one!

At these events I set-up a fun, sword-in-the-stone photo op, where kids could get their pictures taken pulling a Minecraft sword from a big plastic stone and then get their own take-home sword if their parents pre-ordered the book. This was extremely successful as it drew people over to my booth in a natural way. If you’ve ever done a regular bookstore signing, you know how nervous people can be to approach an author at a table or even make eye contact. This fun activity broke down that barrier and once they were in my sphere, I could give them my pitch. And more often than not? They walked away with a pre-order for the book.

BP: How influential was social media to your campaign?

MM: Social media was integral to this campaign, but maybe not in the way people might think. I’ve seen tons of authors offer pre-order gifts with proof of purchase, but they usually have poor results—just a handful of extra sales. Unless they’re diehard fans, people online don’t really care enough to go through the effort of placing a pre-order, taking a photo of proof of purchase, emailing it to you, etc. just to get a signed postcard, pin or other mailable swag.

BUT social media locally – that’s a different story. If your neighborhood has a Facebook page or the NextDoor app or a swap/garage sale page, that’s a golden opportunity to showcase your book and bring in those grassroot sales. Even if people don’t purchase directly from you, they’re going to recognize the book cover when they head to their local bookstore. And they’ll love the opportunity to point out to their friends that “their neighbor” wrote that book.

BP: Were there any challenges or potential roadblocks you encountered (or anticipated that weren’t really roadblocks at all)?

MM: I would say the biggest roadblocks were time and money. There is a lot of legwork involved, going to events, communicating back and forth with people online, delivering pre-order gifts/books. It’s not for the faint of heart and you need to be ALL IN if you want it to work on this level. Not all authors are willing or able to put in this much effort before the book even hits store shelves and that’s fine! But again, a lot of this is stuff you might be planning to do already—once the book is out. Why not try starting earlier?

As for money, my pre-order gifts cost about $1 a piece since I bought them in bulk online. That can add up if we’re talking hundreds of sales. However, to balance this, I simply reallocated funds I traditionally used for long distance events. Skipping one group signing or conference that you’d have to fly out to and stay in a hotel for can save hundreds of dollars and often you only sell a handful of books at those events anyway. Instead, spend that airfare and hotel money on bulk pre-order gifts and get more books into kids’ hands. (Note: I did not give out pre-order gifts at school visits, but Book People was able to give the kids’ a discounted rate for ordering through the school, so that was like a gift in and of itself.)

BP: Do you have any tips/thoughts for local authors (here in Austin and elsewhere!) looking to run similar pre-order campaigns for their books?

MM: Set a goal for yourself—how many books you’d like to sell before release week. I set mine at 250 at first, though I eventually ended up with 550. Make a concrete plan and give yourself enough time to carry it out. Decide what your strengths are and concentrate on those—different campaigns will work better for different personality types. Above all, constantly be on the lookout for opportunities to get yourself out there and don’t wait for release week to start selling your book.

BP: How are you celebrating this book release?

MM: I have a book release party at BookPeople on Saturday, December 1st at 2 pm. We’re going to have sword in the stone cupcakes, the sword in the stone photo op I mentioned above, and fun prizes for the kids. It’s going to be so much fun and a great way to cap off this whole campaign.

And, you know, then start the next book! ☺