Skip to content
hannamfoster What We're Reading This Week June 20, 2018

The Song of Achilles by Madeline Miller

Every positive thing you’ve heard about this book is true! Greek mythology based fiction is quickly becoming a new love of mine. The myth of Achilles is an interesting one, but even more fascinating when told through the eyes of his lover, Patroclus. The prose is breathtaking and it is so easy to get lost in Miller’s words. I wouldn’t be surprised if I finished this book in my next sitting.

The Prince and the Dressmaker by Jen Wang

The Prince and the Dressmaker is the perfect graphic novel for pride month. The art style is charmingly captivating and the story is a heart-warming read for any age-level. The way Jen Wang crafts this story will absolutely melt your heart. 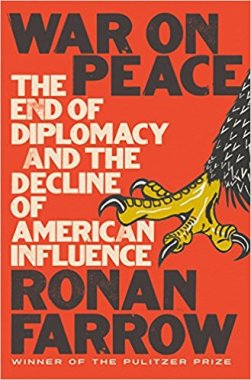 War on Peace: The End of Diplomacy and the Decline of American Influence by Ronan Farrow

I’m nearly finished reading Ronan Farrow’s first book, War on Peace: The End of Diplomacy and the Decline of American Influence.  Farrow worked in the State Department and combines his own experience with detailed and colorful reporting—Farrow interviewed warlords, diplomats from across the world and every living Secretary of State—to show the grim results when the difficult work of diplomacy is taken away from the diplomats and given to the CIA and military, a shift that began with Bill Clinton and has continued in every subsequent administration.