Iron Gold (book 4 in the Red Rising series) is out and Pierce Brown is coming to BookPeople!

Here are the details:

It’s going to be an epic Monday night!!!

Our events are out of this world! 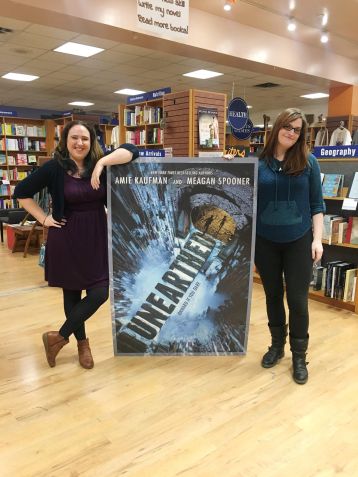 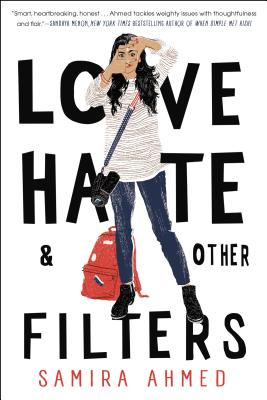 Zenith by Lindsay Cummings and Sasha Alsberg: From #1 New York Times bestselling author duo Sasha Alsberg and Lindsay Cummings comes the first book in The Androma Saga, an action-packed thrill ride of adventure, intrigue and steamy star-crossed romance. Known across the galaxy as the Bloody Baroness, Captain Androma Racella and her motley crew of space-bound privateers roam the Mirabel galaxy on the glass starship Marauder, taking what mercenary work they can find to stay alive. When a routine job goes awry, the Marauder’s all-girl crew finds itself placed at the mercy of a dangerous bounty hunter from Andi’s past. Coerced into a life-threatening mission, and straight into the path of a shadowy ruler bent on revenge, Andi and her crew will either restore order to the ship–or start a war that will devour worlds … But wait! There’s more Zenith News: 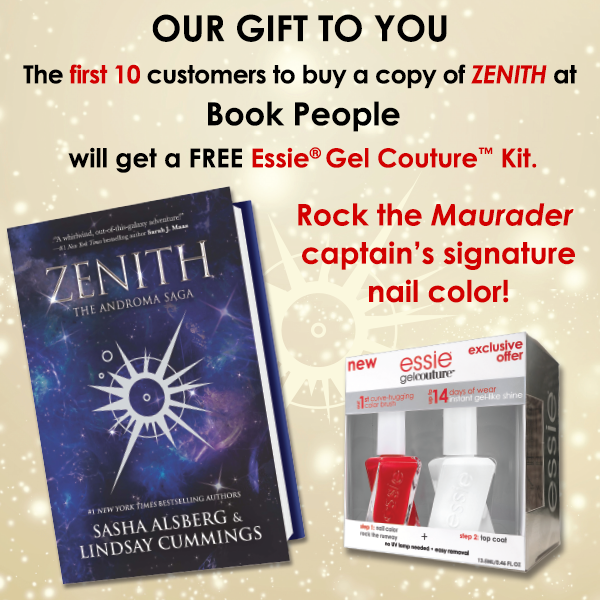 Truly Devious by Maureen Johnson: Ellingham Academy is a famous private school in Vermont for the brightest thinkers, inventors, and artists. It was founded by Albert Ellingham, an early twentieth century tycoon, who wanted to make a wonderful place full of riddles, twisting pathways, and gardens. “A place,” he said, “where learning is a game.” Shortly after the school opened, his wife and daughter were kidnapped. The only real clue was a mocking riddle listing methods of murder, signed with the frightening pseudonym “Truly, Devious.”  True-crime aficionado Stevie Bell is set to begin her first year at Ellingham Academy, and she has an ambitious plan: She will solve this cold case. But Truly Devious makes a surprise return, and death revisits Ellingham Academy. The past has crawled out of its grave. Someone has gotten away with murder. The two interwoven mysteries of this first book in the Truly Devious series dovetail brilliantly, and Stevie Bell will continue her relentless quest for the murderers in books two and three.

Love, Hate, and Other Filters by Samira Ahmed: American-born 17-year-old Maya Aziz is torn between worlds. There’s the proper one her parents expect for their good Indian daughter: attending a college close to their suburban Chicago home, and being paired off with an older Muslim boy her mom deems “suitable.” And then there is the world of her dreams: going to film school and living in New York City — and maybe (just maybe) pursuing a boy she’s known from afar since grade school, a boy who’s finally falling into her orbit at school.There’s also the real world, beyond Maya’s control. In the aftermath of a horrific crime perpetrated hundreds of miles away, her life is turned upside down. The community she’s known since birth becomes unrecognizable; neighbors and classmates alike are consumed with fear, bigotry, and hatred. Ultimately, Maya must find the strength within to determine where she truly belongs.

You Won’t Know I’m Gone by Kristen Orlando: Going rogue in an effort to rescue her kidnapped parents has cost Reagan Hillis her automatic ticket to the Training Academy. But becoming a Black Angel is the only way Reagan will be able to exact revenge on her mother’s merciless killer, Santino Torres. When Reagan is given a chance to prove that she’s worthy of training to be a Black Angel, she also gets the first chance she’s ever had to be her true self. No aliases. No disguises. But when her friend Luke joins her at the Black Angels training compound, Reagan finds herself once again torn between the person she was and the person she wants to be. Reagan has to prove that she’s as good as her parents trained her to be, because she’ll never find Torres without the Black Angels’ help.