We are well into the midst of the holiday season!!!

Which is great, if you’ve finished all of your shopping. But if you’re like us and haven’t even started yet … well, you might look a little something like this:

But don’t worry!!! YA Specialist, Shannon, and Bookseller, Lola, took to the internet this week to discuss their favorite YA books to give as gifts. Here’s just a small sampling of their selections:

Tower of Dawn by Sarah J. Maas – For fans of high fantasy and females who kick a lot of butt, Throne of Glass is a great series to dive into! Be prepared for a heavy commitment, because once you start reading, you won’t want to stop!

Language of Thorns by Leigh Bardugo – One of the best world-builders out there returns to her illustrious Grishaverse to give us not one, but SIX new stories that fans of the Shadow and Bone trilogy or the Six of Crows duology will absolutely need.

Long Way Down by Jason Reynolds – You know we love Jason Reynolds and this book contains pretty much all the reasons why in one place! Told in verse, filled with Jason’s realistic approach to voice and story, Long Way Down is Spoon River Anthology for the modern world.

Want to see what else Shannon and Lola suggest? Check out their video on Facebook! 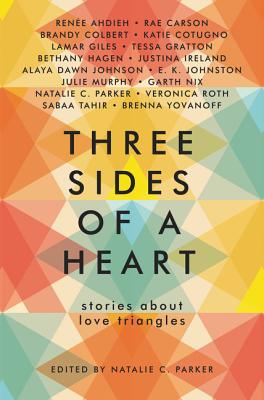 Three Sides of a Heart, edited by Natalie C. Parker

These top YA authors tackle the much-debated trope of the love triangle, and the result is sixteen fresh, diverse, and romantic stories you don’t want to miss.

A teen girl who offers kissing lessons. Zombies in the Civil War south. The girl next door, the boy who loves her, and the girl who loves them both. Vampires at a boarding school. Three teens fighting monsters in an abandoned video rental store.

What do all these stories have in common? The love triangle.

Here, There, Everywhere by Julia Durango and Tyler Terrones

A funny and honest coming-of age-story about first love and finding yourself, Here, There, Everywhere is perfect for fans of Andrew Smith and Becky Albertalli.

Zeus would rather be anywhere than here — Buffalo Falls, the tiny town his family moved to at the end of the school year. Having left all his friends back in Chicago, and with nothing to look forward to except helping out at his mother’s cafe and biking around town with his weird little brother, Zeus is pretty sure this is destined to be the worst summer of his life.

But then he meets Rose.

Rose is funny, beautiful, smart, and an incredible musician; Zeus can hardly believe that someone like her exists, let alone seems interested in being with him.

As the afternoons spent going on local adventures pass into nights discussing their deepest hopes, Zeus knows that he doesn’t have long to convince Rose that what they have is more than a summer fling … if only he’s brave enough to seize the chance.

KICK OFF THE NEW YEAR RIGHT WITH IN-STORE EVENTS!

When Earth intercepts a message from a long-extinct alien race, it seems like the solution humanity has been waiting for. The Undying’s advanced technology has the potential to undo environmental damage and turn lives around. For Jules Addison and his fellow scholars, the discovery of an ancient alien culture offers unprecedented opportunity for study … as long as scavengers like Amelia Radcliffe don’t loot everything first. Beset by rival scavenger gangs, Jules and Mia form a fragile alliance… but both are keeping secrets that make trust nearly impossible. As they race to decode the ancient messages, Jules and Mia must navigate the traps and trials within the Undying temples and stay one step ahead of the scavengers on their heels. But the more they learn about the Undying, the more Jules and Mia start to feel like their presence in the temple is part of a grand design — one that could spell the end of the human race.