Texas Teen Book Festival has announced it’s full line up and OMG are we freaking out!!!! Look at all of this author goodness!!!!

Want to learn more about all the authors coming? Check out the site! And don’t forget to save the date for Saturday, October 7! 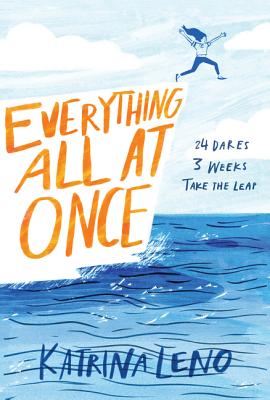 Everything All At Once

A soaring novel by the critically acclaimed author of The Half Life of Molly Pierce and The Lost & Found, perfect for fans of Jennifer Niven and Rainbow Rowell.

Lottie Reaves is not a risk taker. But she’s about to take a leap into the unknown…

Aunt Helen wasn’t a typical aunt. She was the world-famous author of the bestselling Alvin Hatter series. She knew a thing or two about the magic of writing, and how words have the power to make you see things differently.

In her will, Aunt Helen leaves Lottie a series of letters–each containing mysterious instructions. As Lottie sets about following them, she realizes they’re meant to make her take a risk, and, for once in her life, really live. But when the letters reveal an extraordinary secret about her aunt’s past–and the inspiration for the Alvin Hatter series–Lottie finds herself faced with an impossible choice, one that will force her to confront her greatest fears once and for all.

Part mysterious adventure, part love letter to the power of books, this is a brilliantly woven novel about loving, reading, writing, grieving, and finding the strength to take a leap.

For fans of Pretty Little Liars, Little Monsters is a new psychological thriller, from the author of The Darkest Corners, about appearances versus reality and the power of manipulation amongst teenage girls.

Kacey is the new girl in Broken Falls. When she moved in with her father, she stepped into a brand-new life. A life with a stepbrother, a stepmother, and strangest of all, an adoring younger half sister.

Kacey’s new life is eerily charming compared with the wild highs and lows of the old one she lived with her volatile mother. And everyone is so nice in Broken Falls–she’s even been welcomed into a tight new circle of friends. Bailey and Jade invite her to do everything with them.Which is why it’s so odd when they start acting distant. And when they don’t invite her to the biggest party of the year, it doesn’t exactly feel like an accident.

But Kacey will never be able to ask, because Bailey never makes it home from that party. Suddenly, Broken Falls doesn’t seem so welcoming after all–especially once everyone starts looking to the new girl for answers.

Kacey is about to learn some very important lessons: Sometimes appearances can be deceiving. Sometimes when you’re the new girl, you shouldn’t trust anyone.

The Gallery of Unfinished Girls

A beautiful and evocative look at identity and creativity, The Gallery of Unfinished Girls is a stunning debut in magical realism. Perfect for fans of The Walls Around Us and Bone Gap.

Mercedes Moreno is an artist. At least, she thinks she could be, even though she hasn’t been able to paint anything worthwhile in the past year.

Her lack of inspiration might be because her abuela is in a coma. Or the fact that Mercedes is in love with her best friend, Victoria, but is too afraid to admit her true feelings.

Despite Mercedes’s creative block, art starts to show up in unexpected ways. A piano appears on her front lawn one morning, and a mysterious new neighbor invites Mercedes to paint with her at the Red Mangrove Estate.

At the Estate, Mercedes can create in ways she hasn’t ever before. But Mercedes can’t take anything out of the Estate, including her new-found clarity. Mercedes can’t live both lives forever, and ultimately she must choose between this perfect world of art and truth and a much messier reality.

Chandler Baker is coming to BookPeople for her upcoming release: This Is Not The End

If you could choose one person to bring back to life, who would it be?

Seventeen-year-old Lake Deveraux is the survivor of a car crash that killed her best friend and boyfriend. Now she faces an impossible choice. Resurrection technology changed the world, but strict laws allow just one resurrection per citizen, to be used on your eighteenth birthday or lost forever.

You only have days to decide.

For each grieving family, Lake is the best chance to bring back their child.
For Lake, it’s the only way to reclaim a piece of happiness after her own family fell apart.
And Lake must also grapple with a secret–and illegal–vow she made years ago to resurrect someone else. Someone who’s not even dead yet.

Who do you need most?

As Lake’s eighteenth birthday nears, secrets and betrayals new and old threaten to eclipse her cherished memories. Lake has one chance to save a life…but can she live with her choice?

Event details: Chandler Bake will be in store August 12 at 6 pm! Check out all the need to knows here!

The cover for Mindy McGinnis’s next book has been released and it’s gorgeous!!!

About Given To The Earth: Duty, fate, desire, and destiny collide in this intricately wrought tale, perfect for fans of Sarah J. Maas.

While Khosa is made to choose between loyalty and love, Dara is on a mission for vengeance. Years ago, the Pietra slaughtered the entire Indiri race, leaving only Dara and her twin, Donil, alive. Now, spurned by King Vincent, Dara has embarked on a mission to spill the blood of Pietra’s leader, Witt, and will stop at nothing to show his people the wrath of the last Indiri.

As the waves crash ever closer to Stille, secrets are revealed, hearts are won and lost, and allegiances change like the shifting sand.

We still have forever to wait until we can get the books in our hands, but this gorgeous cover has us jumping up and down in our seats with anticipation!!