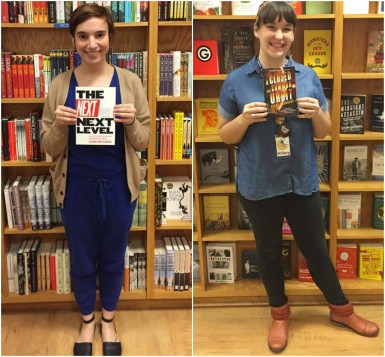 e Next Level by Leon Neyfakh

This is the true story of one man’s obsession with an unsuccessful but passionate rapper named Juiceboxxx. It’s weird and riveting and really smart! Neyfakh is an editor at Slate and rolls with Lena Dunham’s crew, so he’s got this quirky Brooklyn intellectual thing going on. I could devote my entire life to the championing of this book, but I’ll resist. There’s really nothing quite like it. You can find copies of The Next Level on our shelves and via bookpeople.com.

This week I’m reading Artemis Fowl by Eoin Colfer. This kids’ chapter book has been out for over ten years and it continues to be a favorite. Artemis Fowl is part of an old, powerful mob family who has come into hard times after Artemis’s father mysteriously goes missing. Artemis, only eleven years old, feels that it is his job to restore his family to their former glory, in the way only he can—by kidnapping a member of an ancient species called fairies and holding it for ransom. Everything goes according to plan, until the fairies stop playing by the rules. Join Artemis, his trusty companion, Butler, and the captured fairy, Captain Holly Short as they try to stop an inter-species war unlike anything the world has seen. It’s a fast-paced adventure with plenty of twists and turns to keep any reader entertained. If you like Artemis Fowl, check out the rest of this series by Eoin Colfer, or Cornelia Funke’s beautiful Inkheart series. You find copies of Artemis Fowl on our shelves and via bookpeople.com.

This book falls under the “had planned to read and always managed not to” category. Huxley considered it his most important work, whether that was the sentimentality of old age or something more crystalline and compelling in his imagination I don’t know. The book on the whole, though, is not hard to love. It’s a frequent meditation on the compulsions and philosophies that define culture and society the world over, a massive download of everything Huxley spent most of his life exploring then committing to defining. Island is called a utopian novel and I wouldn’t expel the label altogether, but if it is a utopia it is one with an acute awareness of the luck and fragility that maintains it. Amidst the subtleties, the grandeur is an escalating melancholy of impermanence. You find copies of Island on our shelves and via bookpeople.com.

Anyone who has encountered me in the store likely knows that I’m a huge fan of Becky Chamber’s The Long Way to a Small, Angry Planet and will recommend it endlessly. Since reading it I’ve eagerly awaited its sequel/companion novel, A Closed and Common Orbit, and so far I’m just as hooked. The story is incredibly character-driven, chronicling the lives of a number of unique individuals (human, alien, AI, or otherwise!) as they try to find their place within the vast Milky Way Galaxy. The protagonist AI discovers not what it means to be human, but what it means to be sentient, as she explores her new world inhabited by both humans and aliens. Another bookseller on the other side of the world once described the book to me as being “so out of this world and yet incredibly down to earth”. I don’t think there’s a better way to describe it. You find copies of A Closed and Common Orbit on our shelves and via bookpeople.com.