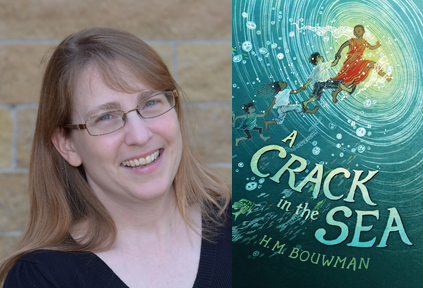 Local author Chris Barton has allowed us to share his conversation with author H.M. Bowman about her novel A Crack In The Sea, a magical new middle-grade novel with illustrations by Yuko Shimizu. To sign up for Barton’s newsletter and be eligible for free book giveaways, click here!

Chris: The starred review the book received from Publishers Weekly began this way: “The Middle Passage and the fall of Saigon: two terrible events, separated by centuries, with seemingly nothing in common. But for Bouwman anything is possible, including the existence of a second world.”

I’m giving away a signed copy of A Crack in the Sea to one Bartography Express subscriber residing in the US. If you’d like that winner to be you, just say so in a reply to this email before midnight on February 26, and I’ll enter you in the drawing.

In the meantime, as always, I’ve got a brief Q&A with the author. But H.M. — I know her as Heather — did a terrific interview recently with Caroline Starr Rose. I recommend their conversation so highly that my feelings will not be one bit hurt if you go read that first and then come back for the one I had with Heather.

Chris: You mentioned [in the interview with Caroline Starr Rose] that, after your writing of A Crack in the Sea began with the image of a giant raft and the story of the Zong slave ship, “More images and stories and real world events influenced the writing as the manuscript progressed.” Can you please talk a little more about that interplay between the fiction you were creating and the unfolding of real life around you?

Heather: It’s hard to remember exactly how things progressed in drafting and revising, Chris! I feel like I’m making up a story about how the book was written….

That said, I do remember very clearly revising this book as I was seeing and hearing news reports about boatloads of people fleeing Syria. There are particular photos and stories….

I know, too, that I felt then (and still feel) in some ways very helpless to change world events. I can give money to organizations that help others, I can vote and write letters to support change, I can show up at marches — but I’m not myself a lawmaker or a doctor without borders or an aid worker.

But I do write stories. I think that writing for young people is a long game — you are putting stories out there that have the power (as all stories do) to influence people’s hearts and lives, but you don’t see any evidence of that for years sometimes, if ever. I hope that 20 years from now there will be a teacher or politician or medical professional or store clerk who will be a better person because of something they read when they were a kid — maybe even something I wrote. I feel sometimes like I am adding my words to a giant pile of kindling, all these loving and thoughtful and creative works for kids, and that immense bonfire burns so bright, and I love thinking that I’ve contributed to it.