Skip to content
bethanyjohnsen What We're Reading This Week October 19, 2016 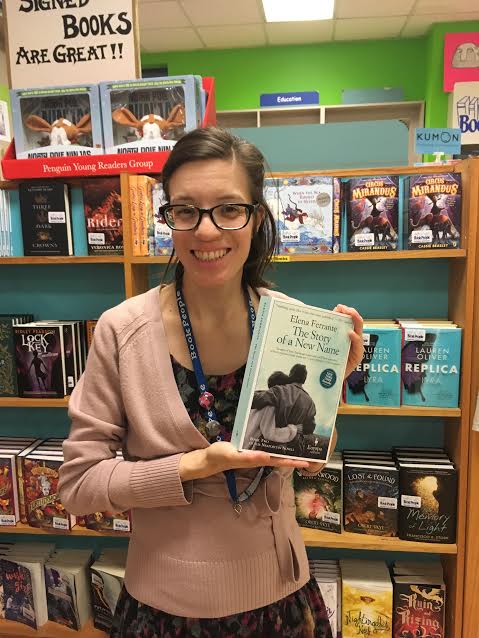 The Story of a New Name by Elena Ferrante

“The whole world Elena Ferrante has built in her Neapolitan novels is so enveloping. You feel like you’re there, and obviously the two main characters, the two women, are really interesting and play off each other really well. Right now I’m on the second book in the quartet, The Story of a New Name. I didn’t know if I was going to be able to read them back to back without any kind of break in between, but that has not been a problem! I just want to immerse myself in that world all the time. It’s really wonderful and keeps getting better. I’m definitely reading the second one faster than the first one. The story follows two girls growing up in a poor neighborhood in Naples and as they get older, through their drama and their relationships with each other and their families and with men. I find the protagonist very relatable.” You can find copies of The Story of a New Name on our shelves and via bookpeople.com. Don’t miss our Ferrante Fever party on November 1 at 6pm as we celebrate the release of Frantumaglia: A Writer’s Journey, available for pre-order now!

The Poisoner’s Handbook: Murder and the Birth of Forensic Medicine in Jazz Age New York by Deborah Blum

“If you’re into  murder and New York and science and history, I highly recommend The Poisoner’s Handbook. I’m still in the first section, where they’re just kind of realizing that a) the City of New York forensic lab was in really bad shape and b) oh, they can figure out when people got murdered by poison, by studying the corpse. This was not something they necessarily knew the full extent of, what you can learn from compounds that actually stayed in the body after a poisoning. And there was this one man, a serial poisoner, who had actually worked knocking people off at an old people’s home and he was kind of crazy and he confessed and they actually didn’t believe him. So they were just trying to get him locked away for being crazy but then it was realized that there was actually some truth to what he was saying. But they didn’t have enough proof that he did it, so that’s where I’m at right now. It’s fascinating!” You can find copies of The Poisoner’s Handbook on our shelves and via bookpeople.com.

Miss You by Kate Eberlen

“I don’t usually like gushy books, but Miss You is a really good romantic type of book that I’m enjoying for the relatable characters. It’s about two kids, Tess and Gus, who are going through serious problems in their lives—Tess’s mom passes away from cancer while Gus is dealing with his brother’s death. These two characters keep running into each other at different points in their lives. It’s about traveling, trying to find your way, not necessarily trying to find romance but trying to figure out who you are and what you want.” Miss You comes out April 4th. Pre-order now!

“As far as I can tell, it’s a sci-fi story. One of the main characters is in a tennis academy, so  there’s some tennis references that I don’t understand, and it’s concerned generally with how society reacts to media. It’s definitely more dense than I expected, so it’s been taking me longer to get through it than I imagined. But, I’m finding that it is funnier than I thought it would be. I’ve been laughing out loud quite a few times. It’s my first David Foster Wallace book, I just went for the long haul. I’m actually in a book club where we’re reading 120 pages a month and meet at the end of each month to talk about the section, so I feel like I’ve got a support group. I think that’s the best way to tackle it, because then you have people to talk about the things you might not have otherwise remembered or connections you didn’t pick up on. There’s so much information.” You can find copies of Infinite Jest on our shelves and via bookpeople.com.

The Grapes of Wrath by John Steinbeck

“Like a lot of people, I was assigned The Grapes of Wrath in high school, but the ten years of life since then and rereading it outside a course has let me move through the text without terrible haste. I really loved it before, and I think I love it more the second time through. I like Steinbeck’s language, his arrangement of compounded detail that is revealed simply and directly at times but always vividly. The story of the Joad family as they try to make their way West in the wake of the Oklahoma Dust Bowl, and the tragedies that unfold en route and after, feels timely as ever. Maybe in the present day, it’s as easy if not easier to imagine people whose fates are not entirely in their hands trying to live with decency even while they are dehumanized. Seems like that’s been a lot of people’s story recently.” You can find copies of The Grapes of Wrath on our shelves and via bookpeople.com.