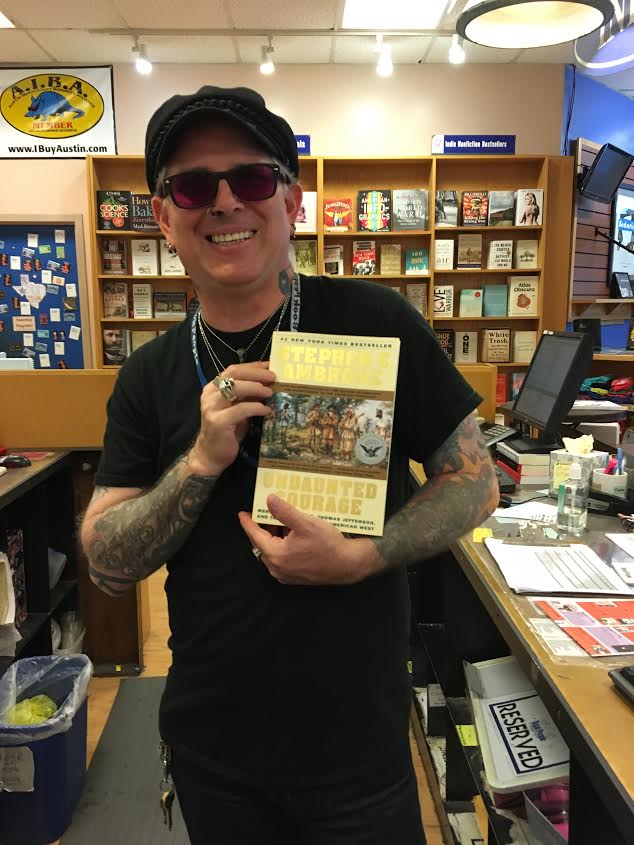 Undaunted Courage: Meriwether Lewis, Thomas Jefferson, and the Opening of the American West by Stephen Ambrose

“Undaunted Courage has been on my list for a long time; it took me a while to get to it, but I decided to pick it up before the movie came out. I’m glad I did; it’s one of the best books I’ve read in the last ten years. I’m learning new things. For example, Lewis and Clark ate a lot of dogs. It was, to quote Lewis, ‘the favorite meat of the party.’ They ate about 9 pounds of meat in a day when they could get it. Meriwether Lewis was Thomas Jefferson’s secretary, and when Jefferson selected him for the mission, he taught him scientific method and what he would need to make biological observations. Lewis chose Clark as a co-commander, not a subordinate, which was unusual. They never did anything unless they were in agreement. This book is nonfiction, but it’s super narrative and delightful.” You can find copies of Undaunted Courage on our shelves and via bookpeople.com.

“I’m reading Zadie Smith’s Swing Time, which comes out next month. It’s about a lot of things—race, fame, the tenability of childhood friendships. I’m only halfway through, but enjoying it so far, especially at the sentence level! The beautiful writing is the best thing about this book.” Swing Time comes out November 15th. Pre-order now!

All Our Wrong Todays by Elan Mastai

“We already have a million time travel stories, but this one is different! It’s about a guy that, in his world, he was a nobody. And 2016 in his world is like the Jetsons. He ends up being involved in the first time travel, back to the machine that started us toward a future like the Jetsons. But when he gets back there, he wrecks it. And when he gets back to 2016, the world is like we have now, and he realizes he’s completely destroyed his reality. It’s written in first person and the main character is very self-deprecating, but it’s very smart. It does well with the time paradox.” All Our Wrong Todays comes out February 7th. Pre-order now!

Notwithstanding by Louis de Bernières

“Notwithstanding is a collection of short stories about a small English village called Notwithstanding. They’re basically very gentle stories about social problems and about happy people in the village. There’s no sex or violence in any of these stories, so it’s ideal for someone who likes Christian fiction, or enjoys Jan Karon or Nicholas Sparks. The stories are interwoven, so you get to know all the characters from different perspectives.” Notwithstanding comes out October 18th. Pre-order now!

Magnus Chase and the Gods of Asgard: The Hammer of Thor  by Rick Riordan

“The Hammer of Thor is the second in Rick Riordan’s Norse trilogy, Magnus Chase and the Gods of Asgard. All of his kid’s books, the series about deities, are in a shared universe. Magnus Chase is the cousin of Annabeth Chase, one of the kids from the Greek series. This is the best book Riordan has written for kids. It’s more adult than the previous books, dealing with issues like anxiety, depression, family issues, gender issues. He digs into some pretty interesting and deep stuff in Magnus that are not typical things one sees covered in books for this age group, but he does his best to write it for kids and explain it in terms they can understand. It’s really funny, but with a more mature humor than you get in the Percy Jackson series.” You can find copies of The Hammer of Thor and the other Magnus Chase books on our shelves and via bookpeople.com.