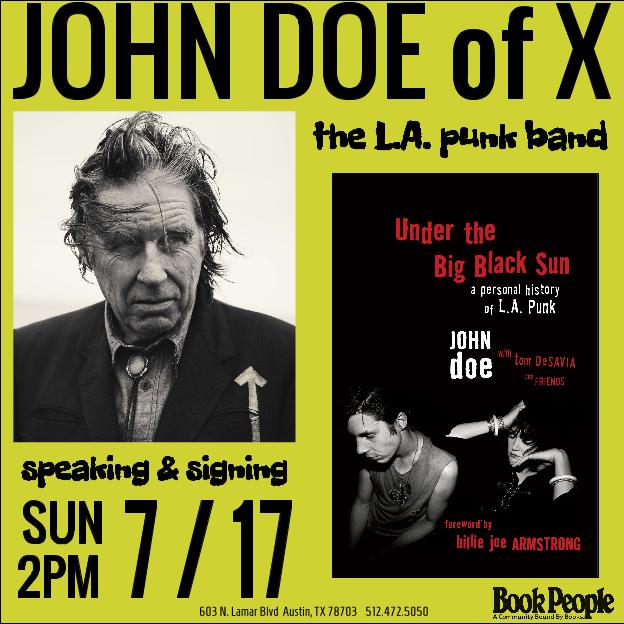 “The true story of the Los Angeles punk scene. A set of vivid personal essays. The most artist-centered look yet at a scene that helped define the future of a music whose rallying cry was no future.” – Record Collector, May 2016

If you cannot attend the event and would like to order a signed, personalized copy of the book, add the book to your cart and put SIGNED COPY in the comments field at checkout. We ship all over the world!

ABOUT UNDER THE BIG BLACK SUN

Explores the nascent Los Angeles punk rock movement and its evolution to hardcore punk. Compilers John Doe and Tom DeSavia have woven together a story of the legendary West Coast scene from 1977-1982 by enlisting the voices of people who were there, sharing chapter-length tales by them along with personal essays from famous (and infamous) players in the scene.

John Doe has worked as a roofer, an aluminum siding mechanic, a manager of poetry readings, a musician, and an actor. He met Exene Cervenka at the Venice poetry workshop in 1976 and started working with Billy Zoom around the same time. When DJ Bonebrake joined X in mid-1977, the lineup was complete. As one of the last original punk rock bands standing, they continue to tour, most recently with Blondie and Pearl Jam in front of stadium-sized crowds and audiences born after the band s formation. He has recorded eight solo records with numerous renowned singers and musicians and as an actor has appeared in over fifty films and television productions, including Road House, Great Balls of Fire, Boogie Nights, and Roswell. He currently tours as both a solo artist and with X. Doe lives north of San Francisco. .

Hope to see you there Sunday the 17th!