Demi is the BookKids Event and Marketing Coordinator. Her favorite convention is HeroesCon in Charlotte, NC, where she spends her time hoping Kevin Wada will become her best friend.

It’s that time of year again! I’m heading to HeroesCon tomorrow, and San Diego Comic Con will be upon us before we know it, running from July 21st – July 24th. Here’s a list of some stellar comic books from the past year, in case your summer is lacking a little sequential art.

1. ODY-C Vol. 1: Off To Far Ithicaa by Matt Fraction and Christian Ward

This retelling of Homer’s The Odyssey is probably the most beautiful comic book I’ve read…ever. Fraction takes the mantle of transforming the epic poem into a space opera very seriously, using dactylic hexameter in conjunction with a cast of mostly women to update and remodel the quest of Odysseus. All of the major cast of characters in this first volume are women, including the monstrous Cyclops, the fair Odyssia, and despotic Zeus. But don’t let the myth of femininity fool you–these women are just as adventurous and violent as in the Homeric epic, and they’re on an inter-galactic journey that will blow your mind. Some of my favorite scenes are also the most terrifying–see the escape from the Cyclops for an awesome example.

Oh man, y’all, this is my favorite book of the past year. Mali and Tessa are two reincarnated assassins (called “sequels”) pitted against each other in an endless, meaningless war. Mali grew up the daughter of a serial killer, and left her hometown for Kansas City, MO as soon as she possibly could to escape the legacy of her father’s name. Tessa has grown up with every luxury in South Africa, if without any affection. They’re meant to kill each other. They do not do that. (Instead, they fall in love.) I am obsessed with the world of these two sequels, with their individual badassery and their combined fortitude. You will fall in love with them, too.

Are you angry about the way politicians today talk about women? Read this. In the world of Bitch Planet, if you are: queer, brown, loudspoken, foulmouthed, fat, angry, or any other “unacceptable” variation of womanhood, you are NON-COMPLIANT. The criminally non-compliant are charged, arraigned, and tried, and eventually they are sent to a women’s prison planet thousands of lightyears away. Volume 1 of this incredible series from Kelly Sue DeConnick (one of my favorite writers) and her collaborators feature the criminally non-compliant in all their messy, womanly glory, and they are incredible.

You miiiiiiight be sensing a theme here, which is the fact that ladies are the best (tell ’em, Beyonce!) and I love reading about them. Giant Days is no exception, thanks to John Allison and these three rad ladies. Susan, Esther, and Daisy are flawed and funny, and their friendship through the harrowing life of a first-year at university is so remarkably genuine. Allison emphasizes the bonds of friendship through every part of this series, though the three women are wildly, delightfully different. My favorite scenes involve the freshman flu epidemic, in which Trieman’s marvelous illustrations lend a wobbly, weird verisimilitude to the feeling of being sick at college. But don’t worry–there are plenty more fabulous moments in this collection. 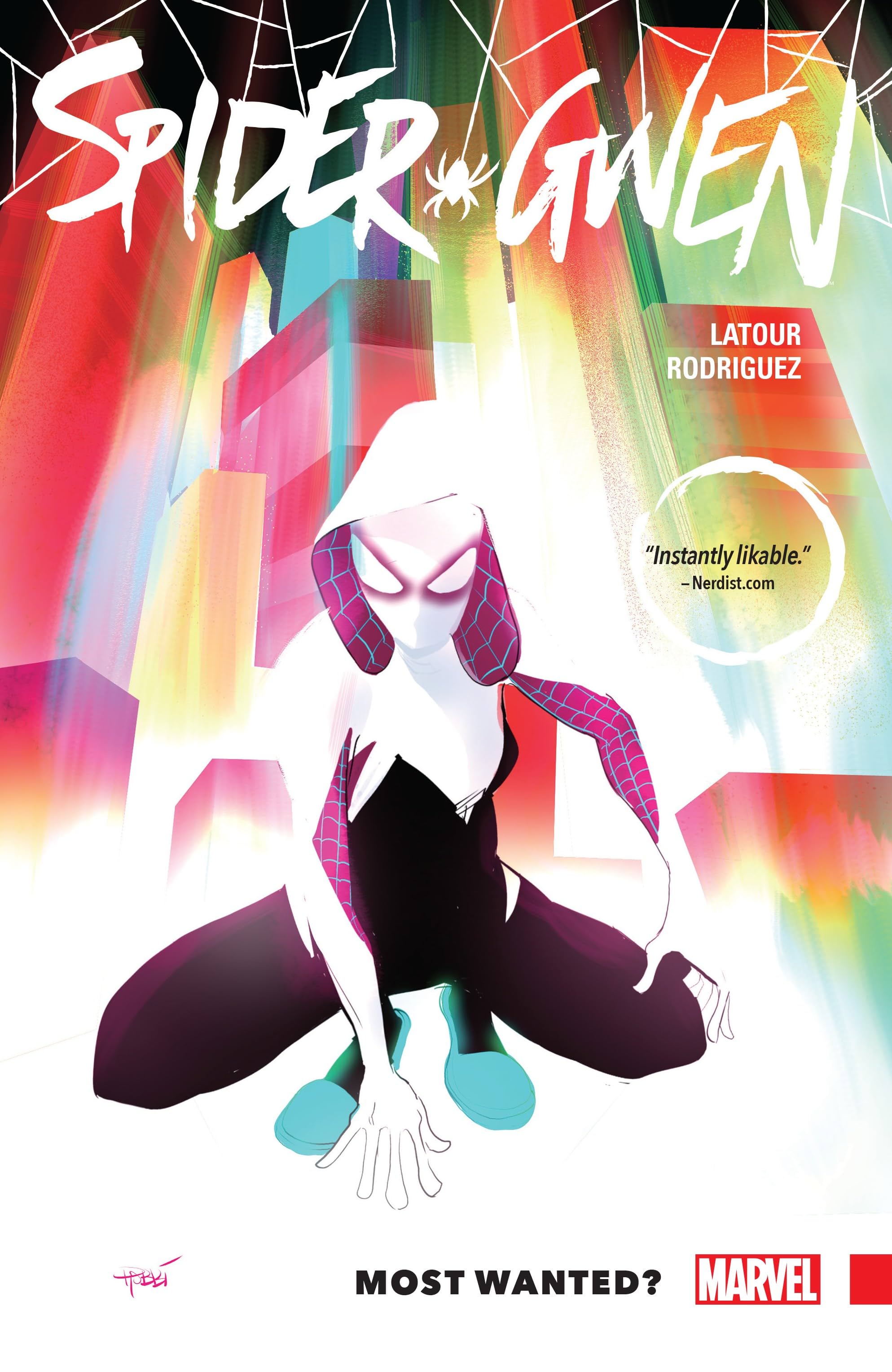 Spider-Gwen is here! Spider-Gwen got her start in a Spider-Man crossover event way back in 2014, and now over the past year and a half she’s been starring in her own book. Gwen is a Spider-Woman from Earth-65 (an alternate universe), haunted by the death of Peter Parker and gifted with spider powers. Also, she’s in a band called the Mary Janes, even if she’s always late to rehearsals. And performances. Because she’s fighting crime. Most Wanted is the entirety of the Spider-Gwen run in 2015 and serves as a prequel to the currently-running Radioactive Spider-Gwen title. Also, it’s amazing–the art by Robbi Rodriguez is graphic and gorgeous, and colors by Rico Renzi are all the perfect shades of neon. Check it out.

In the near-to-distant future, presidential elections are…a little less formal than they are now. Or maybe just the rules are a little less formal. Which is how Beth, viral video star known to the world as “Corn Dog Girl,” becomes commander-in-chief. The commentary and satire are particularly pointed, given today’s political climate; the endless scheming, lobbying, bribing and conspiring in the pages of this book seem like they’re just another day on Capitol Hill. But Beth stands out above all of the career politicians–she’s strong, convicted, funny, and kind, and she’s the sixteen-year-old President of the United States of America. So don’t mess with her.

2 thoughts on “It’s That Time Again! Summer Reading for the Con Season”