Here ‘s selection of titles that are coming out this month that I’m really excited about! Of course there are more than just these being released so keep your eyes and ears open for other books that might tickle your fancy. All text is from publisher copy except where notated. Enjoy!

Two vibrant, disruptive and groundbreaking narratives from comics auteurs Grant Morrison and Philip Bond collected in their entirety for the first time ever
When you’re a teenager, any bad day can feel like the end of the world especially in the stifling domesticity of English suburbia. The boredom of everyday life and the inescapability of bourgeois existence make death seem like an attractive option. But what happens when the excitement you crave actually arrives in full force? The answer may surprise you
Morrison’s narrative inventiveness meshes seamlessly with Bond’s expressive artwork in Kill Your Boyfriend/Vimanarama: the Deluxe Edition, which includes an afterword from the author and an all-new sketchbook section from the artist.

(Grant Morrison is probably my all-time favorite comic book writer. His work on Animal Man and The Invisibles forever changed my ideas on what a comic book can do. I’m super excited to finally get my hands on this book featuring stories I haven’t read since the original run in the 90s.  -Joe) 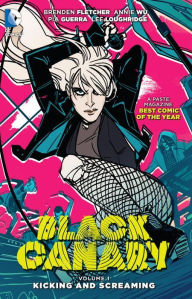 A PASTE MAGAZINE Best Book of the Year!
Dinah Lance hits the road! After years as a soldier and vigilante, the last place Dinah saw herself is on stage but she’s quickly learning she’d die to protect the gang of misfits she’s fallen into. And she just might have to for some reason, the newly rechristened band Black Canary seems to be a magnet for trouble and Dinah’s not gonna believe it when she finds out the reason why
From the pages of Batgirl, martial arts, super-spies, and rock ‘n’ roll combine in the superheroine’s solo series!

(This is a great book for fans of the Batgirl of Burnside series! Like that title, Black Canary brings an indie sensibility to a super-hero market in dire need of fresh, diverse voices. I love reading this book! -Joe)

The American Revolution has never been funnier! America’s founding fathers were brilliant, brave, forward-thinking. . . and ridiculous, at least in the eyes of cartoonist and history buff Peter Bagge! “I find myself laughing out loud whenever I read of their foibles, especially when their oversized egos clashed,” says the author. This collection of short vignettes features some of our country’s best-known historical figures (along with several lesser-known players) and includes all Founding Fathers Funnies cartoons from Apocalypse Nerd and Dark Horse Presents. This hardcover also features several brand new stories and additional biographical information!

(I’ve been reading Peter Bagge for almost entire life. His groundbreaking work on Hate back in the 90s was a defining piece Generation X counter culture. His graphic biography of Margaret Sanger, Woman Rebel, was one of my top ten books of 2013. Bagge is never better than when he’s pointing his pen at the self-important so i’m looking forward to what he does in this book!  -Joe)

A classic Marvel hero redefined by one of comics’ greatest visionaries Frank Miller’s spellbinding scripts and pulse-pounding pencils mark one of Daredevil’s greatest eras – but will the Kingpin and Bullseye’s efforts rob the Man Without Fear of everything he holds dear? Featuring the first appearances of Elektra, Stick and the Hand The daring discovery that drew Ben Urich into Daredevil’s domain of darkness And such forgotten-yet-formidable foes as Death-Stalker and the Gladiator COLLECTING: DAREDEVIL 158-161, 163-191; WHAT IF? 28

(Before he hit the bestseller lists and NYT think pieces with The Dark Knight Returns, Frank Miller made his bones on the low-selling Daredevil comic. Within a few issues, sales had increased and a new talent made its presence felt. This super thick book collects Miller’s first work on the character that made him famous. If you’re a fan of the Netflx television show, then this is the book for you!  -Joe)

The Marvel Universe is no more The inter-dimensional Incursions have eliminated each and every dimension one by one – and now, despite the best efforts of the scientists, sages and superhumans of both dimensions, the Marvel Universe and Ultimate Universe have collided with one another…and been destroyed Now, all that exists in the vast empty cosmos is a single titanic patchwork planet, made of the fragmented remains of hundreds of devastated dimensions: Battleworld And the survivors of this multiversal catastrophe must learn to survive in this strange new realm What strange creatures inhabit this world? Which familiar faces will make their return? And what happens when the various realms go to war? The Marvel Universe is dead…and the victors of the Secret Wars will determine what comes next
COLLECTING: Free Comic Book Day 2015 Secret Wars 0 (Secret Wars story), Secret Wars 1-9

(Jonathan Hickman is one of my favorite voices working in comic books today and with Secret Wars he finishes up 10 years worh of work in the Marvel universe by destroying the universe and recreating it in Doctor Doom’s image. This is how you do epic! I’m going to miss having a Jonathan Hickman book on my Marvel pull list but I’m happy he’s still putting out amazing work on his creator-owned titles over at Image Comics.  -Joe)

Gotham Academy is haunted!
At the beginning of the term, Olive Silverlock returned to Gotham Academy a shadow of her former self. But thanks to her new friendships and their Detective Club sleuthing, Olive was finally starting to feel whole again.
Then, abruptly, Olive’s mother died or, she seemed to. In the weeks after the funeral, Olive begins seeing her mother around the school. An Arkham Asylum patient with a deadly dark side, Sybil Silverlock was a powerful and complicated woman. Could her spirit be reaching out from beyond the grave? And if so, is it motherly Sybil who haunts Olive or her deadly alter ego Calamity?
Plus, the kids hunt a werewolf on campus and Maps teams up with the Academy’s newest transfer, Damian Wayne!

(Batman crossed with Harry Potter, seasoned with a hefty serving of the band The Cure, and directed by Tim Burton makes Gotham Academy my favorite book being published right now. I *heart* this comic!  -Joe)

Archie, one of the longest-running titles in comic book history, is rebooted here in this full-color collection that brings together two of the most talented creators in comics, Mark Waid and Fiona Staples (Saga)! Together they create a surprising and definitive take on Archie’s origin–a story that has never been told. The book will captures the bite and hilarious edge of Archie’s original tales in a modern, forward-looking manner, while still retaining the character’s all-ages appeal. If classic Archie is a Saturday morning cartoon, this new series is prime time.

(I admit to being skeptical about the idea of rebooting Archie, much less actually enjoying it, but when Saga artist Fiona Staples was announced as illustrating the first arc, i had to check it out. Lo and behold I completely enjoy it! Archie is relevant again!  -Joe)

Named a “modern masterpiece” by The A.V. Club, the crticially-acclaimed series Locke & Key takes on new life in a reformatted hardcover collection. The Locke & Key Master Edition, Vol. 2 features the third and fourth L&K arcs, “Crown of Shadows” and “Keys to the Kingdom,” with all-new cover art and design by co-creator Gabriel Rodriguez.

(Joe Hill, son of horror maestro Stephen King, hit the big time with his amazing novel NOS4A2. but before that, he created this amazing horror comic with artist Gabriel Rodriguez. This volume collects the second two trades of this creepy family saga. Highly Recommended!  -Joe