Welcome to Part 2, where I discuss even more of my favorite books that are currently getting turned into films or TV shows (go here to read Part 1). You may have noticed the heavy emphasis on Fantasy and Sci-Fi. Well, that’s where I live, and so many of these stories just cry out to be told in multiple mediums. Not that I don’t love my dramas, mind you. Kazuo Ishiguro’s Never Let Me Go (adapted by my personal hero, Alex Garland) destroyed me. But I try to stick to what I know best, both for your sake and mine. So here is part 2 of Books Getting The Movie Treatment, and why you should read them first.

The Martian by Andy Weir

On mankind’s 3rd manned mission to Mars, one of the astronauts gets stranded there after an accident causes his teammates to think he is dead. Mark Watney has to use his engineering talents and creative problem solving skills to survive alone on the planet while NASA figures out how to rescue him. This hard science fiction novel, written by an engineer, is impeccably researched but also written in a very accessible way. Initially Weir was unable to find a publisher, but after selling 35,000 copies in three months after self-publishing digitally, people took notice. Including filmmaker Ridley Scott. The film version is coming to theaters on November 25, 2015 starring Matt Damon and Jessica Chastain. Scott is the ideal person to bring this novel to screen, despite some of his recent lackluster projects. I have high hopes for this adaptation.

Why you should read it first: It’s just really, really good. Hard science fiction with heart and an excellent sense of humor. Watney’s trials and triumphs, coupled with his irreverent attitude, create a compelling story that grabbed my imagination completely. I even cried a little at the end.

A 16-year-old named Jacob Portman finds himself on a mysterious island where he helps a group of peculiar orphans at Miss Peregrine’s School for Peculiar Children, protecting them from creatures who are out to destroy them. Tim Burton (directing) and Jane Goldman (screenwriter) are adapting it to the screen. Goldman has recently come to my attention having helped adapt some of my favorite movies – Stardust, Kick-Ass, Kingsman: The Secret Service and X-Men: Days of Future Past. The woman knows how to do an adaptation! And the exquisite Eva Green has been cast as Miss Peregrine herself. All the ingredients are there for a delightfully creepy film. The film is currently in production and due out March 2016.

Why you should read it first: Few books exist on both the Horror shelf and Teen Fantasy/Sci-fi shelf at Book People. This is one of them. It was on the NYT Best Seller list for 45 weeks. Riggs initially planned on a young adult picture book featuring photos he had collected, but it eventually developed into a full narrative relying partially on the photos to help tell the story. The result is a uniquely strange and haunting story that already lends itself to the screen.

When Shadow is released from prison he takes up a job as a bodyguard for a mysterious conman named Mr. Wednesday, who turns out to be the Norse God Odin in human form. In fact, all the old gods exist in human form, but as human’s belief in them wains their powers wain with them. The new gods, those of media, celebrity, technology and drugs, are the new powerful gods in America. Odin intends to rally the old gods to fight them, and needs Shadow’s help. Back in 2011 there was a lot of talk about HBO adapting this into a series, which kindled a hope in all Gaiman fans. But after trying three writers they just couldn’t get a script that worked. However, just under a year ago, the Starz Network announced it would be developing the series with Bryan Fuller and Michael Green, and Gaiman would both executive produce as well as, hopefully, write and episode or two (and based on his episode of Doctor Who, “The Doctor’s Wife”, which is possibly the best Doctor Who episode ever, I hope that this is true). Fuller and Green both have some excellent credits to their names, including Dead Like Me and Heroes, so as of now the future of the series looks promising.

Why you should read it first: Aside from the fact that it won ALL THE AWARDS the year it was published (2002), anyone who’s read Gaiman before will understand not just the imaginative breadth of his characters and stories, but the beautiful prose in which they are written. I don’t need to convince those people. But if you haven’t read Gaiman, THIS book is the place to start. And when you are done, just read all the others too. You’ll be transported to worlds you wish existed, but then be relieved that they don’t, because things in this world would just get too weird if they did. And like I said before, Gaiman is one of the worlds best dreamers and no one else writes like he does. And, as with many other books, no matter how good the series is, it could never cover everything.

In the near future the U.S. exists as a patchwork of corporately owned city-states. The Mafia and private enterprise control everything. A new psuedo-narcotic making the rounds in the Metaverse (which is like a future virtual reality internet) is actually a computer virus, but also manifests in the user in the real world. Hiro Protagonist (yes, that is the main character’s name), joins forces with a young skateboarder to uncover the truth about what is a major, and bizarre, conspiracy. Joe Cornish, director of the amazing Attack The Block, signed on to write and direct Snow Crash as a feature film back in 2012. If anyone can do this novel justice, it’s him. However, it’s been over two years and the title has yet to show up on IMDb under Cornish’s name. The status of this much anticipated project is unknown, but my heart will break if the Cornish version doesn’t become a reality.

Why you should read it first: No matter how good the film could be, this novel (like many novels) is much to complex to distill all the ideas it contains into a 2 hour feature. It goes into history, politics, religion, computer science, philosophy, and much much more. It is one of the finest examples of early cyber-punk, though some consider it a parody of the genre as it contains many absurdist elements. If you have ever thought about reading Stephenson, but shied away because his later novels seem intimidating, THIS is the one you should start with. It’s completely accessible in content and style, but also completely unique in its approach. Any fan of Ready Player One should ABSOLUTELY read this as RPO could be considered a direct descendant of this novel. They live next to each other on my book shelf. 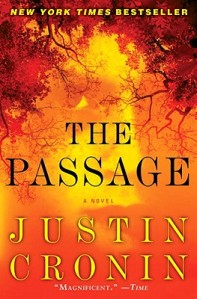 The Passage by Justin Cronin

A post-apocalyptic world is overrun with vampire-like creatures infected by a highly contagious virus that was manufactured in a project intended to develop new immunity boosting drugs. A young girl, Amy Harper Bellafonte, who was infected in the project, but doesn’t exhibit the bloodlust or the morphology of the other subjects, could be the only way to save the few remaining colonies of uninfected humans left. The story switches between her journey and the journey of a colony of survivors who’s camp was compromised. Ridley Scott and Scott Free Productions acquired the rights to the trilogy before the first book was even finished in 2007. The project is listed on IMDb as still “In Development”. So, much like the mysterious third novel in the trilogy (whose publication date keeps getting pushed back), the status of this project is still unknown. But I trust Ridley Scott to do this novel justice. And there can never really be too many vampire movies, can there?

Why you should read it first: When The Passage was first released quite a bit of fact-checking ensued to ensure it wasn’t a new Stephen King novel written under a pseudonym. It’s been compared several times to King’s The Stand, and King himself calls the book “enthralling”. I agree. I would continue to read until the wee hours of the morning because I just had to know what happened next, sleep be damned. And at 766 pages it’s worth noting that I just didn’t want it to end. The Twelve, referring to the twelve subjects of the original experiment, was released in 2012 (also excellent) and the final book in the trilogy is supposed to come out later this year. So you’ve got a solid several weeks of great reading material just in these three books!

Do you have an opinion on these books, or the proposed adaptations? There is a comments section below! Let’s talk!

11 thoughts on “Books Getting The Movie Treatment – Read Them First! (Part 2)”