Featured Books of the Month: 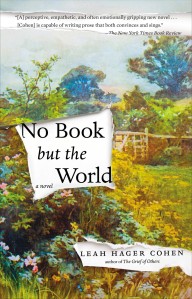 No Book but the World: A Novel  by Leah Hager Cohen

A story about a brother and sister, Ava and Fred, who as children has what seemed to be an idyllic childhood with parents that believed in curiosity and the natural environment. But as adults they’ve fallen out of touch. When her brother is accused of a shocking crime she must convince the world of his innocence and come to terms with her guilt for not being there for him. It’s dark literary fiction about an unconventional family, the bond between siblings, and what they do and do not owe to each other.

The Goldfinch by Donna Tartt

Winning the 2014 Pulitzer Prize for Fiction as well as the Andrew Carnegie Medal for Excellence in Fiction, this #1 New York Times bestseller is finally available in paperback.

Thirteen-year-old Theo Decker miraculously survives an accident that kills his mother. Having been abandoned by his father he is taken in by a wealthy friend’s family. As he navigates his way from adolescence to adulthood his life is fraught with danger and addiction, all the while clinging to the one thing that reminds him of his mother.

Stephen King said: Tartt proves that the Dickensian novel—expansive and bursting with incident—is alive and well.

The Narrow Road to the Deep North by Richard Flanagan

In a Japanese POW camp in the Thai-Burma Death Railway in 1943, Australian surgeon Dorrigo Evans struggles to save the men under his command from starvation, cholera and brutal beatings by their guards, all the while being haunted by his past. The novel tells the story of love, death, family, war and truth.

“A majestic tale encompassing the entire breath of human experience – from heights of passion and depths of despair; a truly engrossing and unforgettable tome from a master storyteller.” – Raul – Book People Bookseller

Featured Wine of the Month:

A dry white wine using Sauvignon, Semillon and Muscadelle grapes, it has notes of honeysuckle and chamomile, along with a touch of white peach. Perfect for the warm days ahead. $13.75/bottle